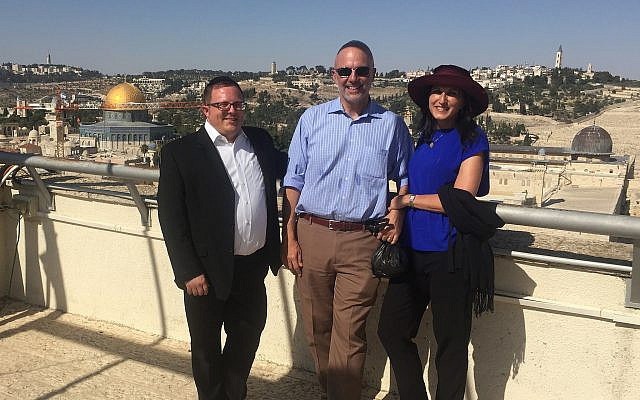 Congressman Ted Deutch, his wife Jill, and the author on the roof of Yeshivat Hakotel in Jerusalem's Old City.

While most of Boca Raton, Fort Lauderdale, Pompano Beach, and Coral Springs, Florida celebrated Passover and Easter, and worried about the Coronavirus, an important anniversary was marked. Congressman Ted Deutch of Florida’s 22nd congressional district celebrated ten years serving in Congress. Congressman Deutch was elected to represent Florida’s 19th district by a special election in April of 2010. Prior to his election to Congress, Deutch served four years in the Florida State Senate.
Today, Congressman Deutch is the Chairman of the House Ethics Committee, a senior member of the House Judiciary Committee and the House Foreign Affairs Committee, where he serves as the Chairman of the Middle East, North Africa, and International Terrorism Subcommittee. Deutch won his last election in 2018 with 62% of the vote. He is a respected member of the House and of his community in Florida.

Deutch has been a champion of the US-Israel relationship. While in the Florida Senate he passed the nation’s first law mandating that public pension funds not be invested in Iran’s illicit quest for nuclear weapons. He passed his own legislation in the House of Representatives to crack down on companies that financially support Iran’s nuclear weapons program. Ted passed a bipartisan resolution through Congress condemning the use of human shields by Hamas and other terrorist groups that violate international law. Ted has also passed legislation enhancing U.S.-Israel cooperation in new areas like energy, agriculture, and cybersecurity. The U.S.-Israel Strategic Partnership Act, co-introduced with Ileana Ros-Lehtinen, was passed by Congress and signed into law by President Obama in December 2014.

More recently, Ted led the effort in the House of Representatives to support the swift conclusion of a new ten year Memorandum of Understanding between the United States and Israel. This new agreement provides Israel with the largest ever security assistance package to ensure Israel can defend herself against any and all threats. Impressively, Deutch crossed party lines when he supported President Trump’s move of the American Embassy in Israel from Tel Aviv to Jerusalem, saying, “Jerusalem is the historic capital of the Jewish people and will always be the capital of the modern state of Israel. Moving our embassy to Jerusalem reflects what Congress stated over 20 years ago and what is reality, and I welcome today’s dedication ceremony.”
I frequently joke with Congressman Deutch about how I was approached by die hard Republicans to run against him. Their theory was that although Congressman Deutch was the best member for the US-Israel relationship, it would be better to have a Republican that is just as passionate about the US-Israel relationship. I explained to them that Congressman Deutch’s strengths aren’t in his passionate speeches on Israel or his frequent supportive statements. Passion isn’t what makes a great representative, getting bills passed does.

Congressman Deutch has a unique talent that is especially valuable in Washington. Congressman Deutch is able to have open discussions with colleagues in the House about their concerns and assuage their worries. He can talk to them about the benefits of a stronger US-Israel relationship and bring them on board to vote for bills that strengthen that relationship. Deutch does this by avoiding reactionary objections to every anti-Israel comment made. He stands for issues that his party believes in, and he leads on them. He has become a champion on reducing the influence of big money in our elections, gun violence prevention, fighting for full equality for all, and advancing the security interests of the United States. Most importantly, Congressman Deutch has learned to work quietly behind the scenes to be one of the most effective legislators on the Hill.

As a constituent of Congressman Deutch I feel that I have the very best representative in Congress. I don’t think there is a member who has given up more, works harder and gets more done on the issues most important to me than Congressman Duetch. I’m proud that he’s served ten years in the house and I look forward to decades more of his excellent representation.