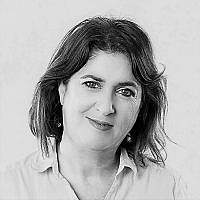 The Blogs
Tova Markowitz
Apply for a Blog
Please note that the posts on The Blogs are contributed by third parties. The opinions, facts and any media content in them are presented solely by the authors, and neither The Times of Israel nor its partners assume any responsibility for them. Please contact us in case of abuse. In case of abuse,
Report this post.

Having become all too familiar with terror attacks here in Israel, we understand that these acts of aggression are orchestrated to disrupt, destroy and cause deep physical pain and emotional distress. They are also intended as instruments of extreme political and cultural polarization.

Following an attack, there is always a multiplicity of analyses that revolve around “us” and “them,” a collective but isolating barrage of finger pointing from all sides. On the average Israeli college campus, terror attacks are followed by a slew of sharp comments and assorted expressions of anger and fear. But in the end, the undergraduate student body tends to band together in solidarity with a single side, or makes the conscious decision to remain wholly indifferent.

However, such is not the case on Ono Academic College’s multi-cultural campus in Jerusalem, where I have been the Deputy General Manager for more than three years. On our uniquely inclusive college campus, every incident of terror or political unrest is both a cause for great concern as well as an exciting opportunity for growth.

In addition to the 1,500 ultra-Orthodox women and men who attend classes on alternating days in pursuit of their bachelors degrees, the campus plays hosts to another 2,500 undergraduate students, roughly a fifth of whom are Arabs, most hailing from East Jerusalem neighborhoods like Sur Baher, Shu’afat, Beit Hanina and Issawiya, areas most often associated with grim, post-terror attack news broadcasts.

Our objective is to not only make higher education accessible to students from all backgrounds but create educational environments that allow them to thrive. However, outside factors, like terror attacks and the fear that surrounds them, transforms our task into a daunting challenge.

In an effort to give everyone on campus an equal voice, students are included in round tables discussions about various issues related to multiculturalism and the challenge of a shared society. Additionally, our calendar is filled with joint events that cater to students from all cultural backgrounds, including a communal Ramadan dinner and a joint celebration for Hanukkah, Christmas and the holiday of the Prophet Muhammad. Most importantly, students in all academic programs are required to take a course entitled “Israeli Identity: The Challenge of Living Together.”

While these social events and educational tools lay the groundwork for open dialogue and generally stem the tides of discontent, there are always incidents that trigger harsh reactions from our student body, an unusually diverse group that constantly struggles to reject popular biases in favor of tolerance and cultural understanding.

One such incident centered upon an exam that took place on campus the morning after a stabbing attack on the Temple Mount in which two Border Police officers were killed. As the class assembled in the classroom for the exam, one of the students, an Arab from East Jerusalem, began distributing candies. Several of the students fumed, immediately linking the distribution of candies to joyful celebration following the loss of Israeli life. After assessing the situation, I was able to successfully calm the students down, explaining that the Arab student was simply sharing treats to celebrate her marriage a few days before.

Not surprisingly, social media platforms, where tone and intent can be easily misconstrued, are often our greatest barriers to student unity. In particular, student WhatsApp groups often become extremely heated even over the smallest misunderstandings. And yet, we still find traces of progress amid the pain and confusion.

When an Israeli student comes to me to complain that the members of a specific WhatsApp group have been making inappropriate statements about Muslim students, I see that as a small but significant step forward, evidence that we are, in fact, changing the face of Israeli society.

These small victories are born out of patience and persistence. Like most other elements of education, the key is commitment, consistency, and calm. There is no magical formula to establishing a true shared society. There is only hard work and dedication to the ideals of equity, diversity and inclusion.

Following every terror attack, we have our hands full clearing the air between students from varied cultural backgrounds. But the fact that they are all willing to attend the same university and prefer to share their heated and controversial opinions at round table sessions rather than taking it to the streets means that we are finally inching closer to the Israel we have always dreamed about. As long as our dialogue remains open and honest and opportunities for cultural education and understanding remain plentiful, we will be able to overcome the disruptive and polarizing powers of any destructive force — social, political or otherwise.

Tova Markowitz is Deputy General Manager of the Jerusalem campus of Ono Academic College, a model of multicultural undergraduate and graduate programming and education-based social reform.