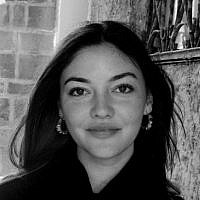 The Blogs
Raymi Libutti
Apply for a Blog
Advertisement
Please note that the posts on The Blogs are contributed by third parties. The opinions, facts and any media content in them are presented solely by the authors, and neither The Times of Israel nor its partners assume any responsibility for them. Please contact us in case of abuse. In case of abuse,
Report this post. 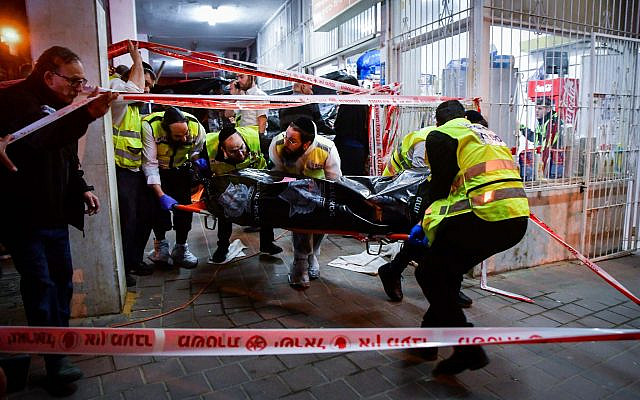 Members of the Zaka emergency organization remove a body from the scene of a shooting attack in Bnei Brak, March 29, 2022. (Avshalom Sassoni/Flash90)

With the recent wave of terror attacks in Israel that took the lives of 11 people, Israelis have suddenly found themselves in a situation recalling the dreadful days of the Intifadas. Though Israelis have an experienced and cold response to terrorism — to keep it together and move on, albeit with prudence — something about the recent terror attacks has evoked fear of the unknown. After all, the last wave of terror attacks happened exactly twenty years ago with the second Intifada; meaning that the soldiers protecting Israel today were either infant at the time or were not yet born. Since then, Israelis have not had terrorism at the forefront of their mind as a daily occurrence. The bolstering of security throughout these twenty years has allowed Israel to keep terror attacks at an all-time low, making the recent surge in terrorism come as a frightful unprecedented event to many. Stories from twenty years ago do not pertain to such a distant past anymore: buses, cafes, and schools have become places of restlessness once more. Israel will have to face this unprecedented wave of terrorism by using its intelligence to the best of its capability. In order to do so, it is fundamental to understand what evoked such attacks and at what time they have occurred.

As the holy weeks of Ramadan, Pesach, and Easter are coming up, it is crucial to understand that these holidays are often stage to a period of increased tensions between Israelis and Palestinians. Indeed, in May last year, the period of Ramadan finished with an eleven-day war between Israel and Hamas, where roughly 142 civilians lost their lives on both sides. However, by relying on the renowned Iron Dome, Israelis felt more secure than they are feeling currently with the recent surge in terror attacks. Terrorism works with the element of surprise — it seeks to terrorise the population targeted into fearing everyday life, something which Israelis have not felt the constant threat of in years.

The first attack took place in the city of Beersheba located in southern Israel, where an Israeli-Bedouin killed four civilians in a stabbing and vehicular ramming attack. The second, just a few days later, took place in the city of Hadera, where two 19-year-old Israeli Border Police officers were killed by two Israeli-Arabs from the town of Umm el-Fahm. These attacks were later claimed by the Islamic State. The most recent occurred in the ultra-Orthodox city of Bnei Brak, a suburb of Tel Aviv, where five people, including the attacker, were killed. The attacker was identified as a Palestinian from the West Bank, specifically from the village of Ya’bad near Jenin. He had been working illegally at a construction site in Bnei Brak and had been previously jailed for six months in 2015 on accounts of dealing with illegal firearms and being affiliated with a terrorist group. The sudden uptick in terrorism in the heart of Israeli cities has arisen debates on Israeli intelligence’s failure to foresee such attacks.

The attacks have taken place just as Israel sought to reduce tensions ahead of Ramadan by vowing to grant 8,000 new work permits for Gazans. Now, the IDF has boosted troops on the Gazan border and in the West Bank, expecting further attacks to take place due to the contentious Palestinian Land Day on March 30 and the upcoming weeks of Ramadan. Hamas, though has not claimed responsibility, has since hailed the attack in Bnei Brak, claiming that, “Responding to the crimes and terrorism of the occupation is a legitimate right for all our people until the occupation is removed from our land.”

The tensions may have well arisen from the historic Abraham Accords and the recent summit hosted by Israel between Foreign Ministers coming from the UAE, Morocco, and Bahrain, as well as U.S. Secretary Anthony Blinken. The newly-established diplomatic ties between Israel and Arab countries, brokered by the Trump Administration, have led to disappointment amongst Palestinians who see their cause as being overshadowed by the slow but steady acceptance of Israel by Arab countries. Though Israel’s acceptance in the region is not to be overstated, a groundbreaking process is taking place nonetheless, and the Palestinians understand just how significant this is for Israel’s regional standing. As Israel is legitimised by countries that once negated its very existence, the Palestinian cause is at risk of being set aside by the same countries that once pledged to fight for its establishment. With this in mind, Palestinian struggles for statehood may very well translate into desperate attempts to prevent the Israeli government from continuing on the path of normalising relations with Arab countries by making Israeli society fear a possible third Intifada as a reprisal.

With an Arab-Israeli alliance against Iran in formation, the Iranians may actively seek to fuel terrorism within Israel. Tehran has attempted to influence Hamas through financial and military support since the group’s appointment of Yahya al-Sinwar, a more Iranian-friendly leader. Military support has expanded Hamas’ arsenal exponentially, as witnessed in May 2021 when rockets launched from Gaza reached Tel Aviv. Israel has since sought to intercept the weapons allegedly smuggled to Gaza by Iran. Yet, recent events have highlighted just how difficult it is to prevent and foresee terror attacks–unlike missiles–even for an experienced country like Israel. Iran could take advantage of this moment to increase its logistical support of Hamas to weaken Israeli security even further, particularly following the historic summit.

What may happen next?

Following an assessment by the Israeli Defence Ministry and senior IDF officials, Israel has raised security forces to the highest level of alert. This consists of fifteen companies of Israeli special forces to provide Israeli police with assistance and training, with an additional 1,000 troops to be deployed to major cities. As well as this, logistical assistance will be provided, and all soldiers that have had proper training will be able to bring their weapons home from base. Counter-terrorism efforts are being continuously strengthened to ensure the IDF is ready to act in various possible scenarios. Such efforts can already be seen through the Israeli Border Police, Police, and the Shin Bet (Israel’s internal security service) having arrested twelve Islamic State members and supporters in the northern Israeli cities of Wadi Ara and Nazareth in a raid on March 28. Further arrests have taken place in the West Bank cities of Nablus, Bethlehem, Kedum, Ramallah, Marda, and Ya’bad, where the IDF intends to demolish the home of the Bnei Brak terrorist. 49 Palestinians working in Israel illegally have also been arrested. Along with the arrests, Israeli intelligence is also likely to focus on special operations aiming to seek out radicalised members of society throughout the territories. Though these are the most efficient ways of preventing and deterring terror attacks, the arrests and operations may carry a potential threat of escalation if an accident were to happen, due to Hamas and other Palestinian groups hoping to take advantage of a mishap to retaliate.

A second potential threat of escalation would be clashes between Israelis and Palestinians during Hamas planned rallies on Land Day and throughout the period of Ramadan. Though it is not in Hamas’ current best interest to seek an escalation, it is actively supporting activity in the West Bank and within Israel, which Israel is currently responding with raids and arrests–for now. Were terrorist attacks to continue, a harsher response is likely to ensue. This would lead to Hamas encountering the dilemma of striking back or losing face, especially in the period of Ramadan. Their increased rivalry with Fatah, and the increased presence of ISIS in Gaza, could mean that Hamas would find itself forced to engage in conflict to prove their leadership. Such actions could see a backtrack by the Israeli government on the increase of work permits for Gazans, with a potential for violent protests not only in Gaza but also in the West Bank.

On one hand, if the Israeli government were to enter into conflict due to the recent wave of terror attacks, it could risk jeopardising its current renewed relations and its alliance against Iran. On the other hand, Israel needs a quick and strong strategy to counter the current wave of terror attacks — failing to do so may result in the terrible consequence of a higher death toll and a newfound paranoia in Israeli society that could translate into a political crisis with meaningful consequences; playing into the hands of the terrorists. Furthermore, the threat of escalation should not be ignored, meaning that Israel could enter another costly and draining war that could not only damage its reputation, yet also the morale of its society which experienced war less than a year ago.

To reassure the country, Israeli Prime Minister Naftali Bennett has implied that Israel will respond severely if attacks continue, stating, “We face a challenging period. We have experience in dealing with terrorism…The secret of our existence is the mutual responsibility among us and our determination to maintain the home that we have built — at any price.” Nonetheless, terrorism, unlike rockets, plays on the element of surprise and prides itself in its unpredictability, meaning that in these upcoming weeks Israel needs to ensure it will not be caught off guard and forced to make a difficult decision.

About the Author
Born in Argentina to Italian and Peruvian parents, I now find myself in Israel to complete a Master's degree at Reichman University. I have lived in over seven countries throughout my lifetime, which has fueled my passion for all that encompasses international relations, specifically in security-related matters.
Related Topics
Related Posts
Comments