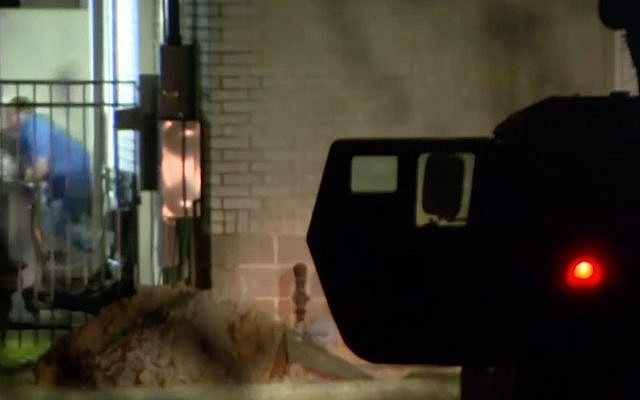 The moment a hostage escaped the Texas synagogue, before the perpetrator was shot dead. (Credit: Jewish News)

Last weekend’s hostage taking at the Beth Israel Synagogue in Colleyville, Texas, appears at first sight to be fairly straightforward: it was an act of antisemitic terrorism, of the type that has become depressingly familiar to Jewish communities across the globe.

It was another reminder of the reason why we have tight security at synagogues, Jewish schools and our other communal buildings. It follows the devastating terrorist attacks on synagogues in Pittsburgh, Poway, Copenhagen and Halle in recent years. Visitors often comment on how hard it is to gain entry to synagogues, compared to churches or other places of worship: this is the reason why.

This particular attack even appears to have a specific goal: to secure the freedom of Aafia Siddiqui, a Muslim woman linked to al-Qaeda and sentenced to 86 years in prison on various terrorism-related charges in 2010. Siddiqui is held in a Texan prison not far from Colleyville and it seems that her release was the sole demand of the hostage taker.

But you don’t have to look far beneath the surface to see that this particular attack is something of a puzzle. We may need to wait for the police investigation to uncover all the facts before truly understanding how Faisal Malik Akram from Blackburn ended up in the Beth Israel Synagogue in Texas last Shabbat.

If Akram’s goal was simply to take Jews hostage in a synagogue, there are many others closer to home that he could have chosen rather than flying 4,500 miles to do it.

Similarly, if Akram was part of a wider plot to secure Aafia Siddiqui’s freedom, there must be plenty of Islamist extremists or al-Qaeda supporters who live much closer to Texas and could have been recruited to carry out a hostage-taking, rather than relying on a middle-aged Muslim from Lancashire to fly in and do the job.

The question of why Akram chose to take hostages in a synagogue, rather than, say, a church or a school, seems to have puzzled some commentators. For others, it is quite simple: he did it because they were Jewish.

This last point is an assumption about Akram’s motives that is yet to be confirmed, but there is plenty of evidence of the antipathy towards Jews in parts of our Muslim communities. One large-scale survey of antisemitic attitudes in Britain, published in 2017 by CST and the Institute for Jewish Policy Research, found that British Muslims are significantly more likely than the general population to hold antisemitic attitudes – in fact antisemitic views are as common amongst British Muslims as they are amongst people who identify as very right wing politically – although it also showed that most British Muslims rejected antisemitism.

This survey also showed that levels of antisemitism are higher amongst people – Muslim or not – who hold strongly anti-Israel attitudes. It is not possible to say whether the antisemitism influences attitudes to Israel, or whether dislike of Israel fuels antisemitism; but whichever it is, we saw the impact of this mixture of anti-Israel hatred and antisemitism amongst British Muslims last May, when there was a huge spike in antisemitism in Britain during the conflict in Israel and Gaza.

Two thirds of antisemitic incident perpetrators for whom CST obtained a description during that month of conflict were of south Asian or Arab appearance, while just over a quarter were described as white – the reverse of what happens during a ‘normal’ period. Over 80 per cent of all antisemitic incidents that month involved language, imagery or behaviour linked to the conflict in Israel and Gaza. And while it would be wrong to assume that every incident perpetrator of south Asian or Arab appearance is a Muslim, when you put these statistics together they do suggest that antisemitism emanating from within our Muslim communities played a large part in driving the increase in antisemitism during that period.

This poses a challenge that goes beyond the immediate security lessons of how to keep a potential terrorist out of a synagogue. It is a challenge not just for Jews and for Muslims, but for everyone who understands the importance of building a harmonious and diverse society.