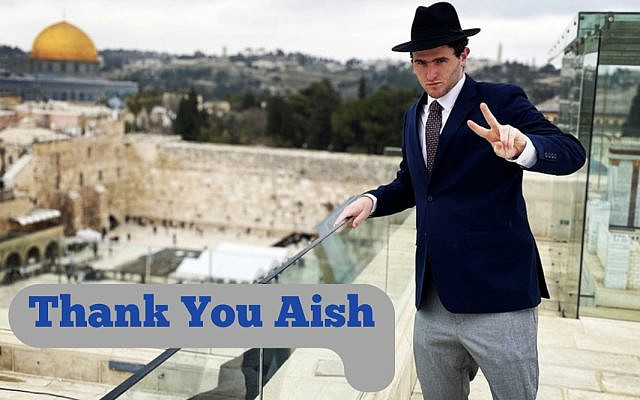 On Top Of Aish World Center

Leaving for Israel the day after my college graduation three years ago was a radical move. All of my friends were joining the workforce and there I was going off to study Judaism at Aish HaTorah. In hindsight, it was one of the greatest decisions of my life.

I was never distant from Judaism. Growing up I marched in Israel parades, kept kosher for Passover, always attended high holiday services, was bar mitzvah’d, often led Friday night services at my shul. The first day of college I joined every Jewish organization and eventually took leadership roles in all of them. I have always been proud to be Jewish and found it a core pillar of who I am.

Things started changing though my senior year of college. Attendance at Shabbat dinners was rapidly declining and nearly all of my Jewish friends were apathetic to anything Jewish. Identity was enough for them, no need to participate in any ritual or Jewish activity with the possible exception of the free birthright trip. I felt that Judaism was under siege. Something so beautiful in my eyes was treated as nothing to close friends and so I brainstormed ways to get them more involved. Efforts were often in vain and I felt compelled to take the responsibility on myself to step up Jewishly where I felt my peers were lacking.

I started going to Shabbat lunch every week, became my fraternities Jewish life chair on top of my presidential responsibilities and planned numerous Jewish oriented events. I started wrapping tefillin most days, wore tzitzits if my pair was clean and went to the kosher food station as often as I could.

It was only fate that one day I got a call to join a Jewish class with a campus Rabbi. Only problem was it was the Rabbi of another campus. I had no idea how he got my number but I agreed to drive there and brought three of my friends with me. Turned out the Rabbi was leading a Poland trip that winter and an Israel extension which my friends and I did. That eventually brought me into the doors of Aish HaTorah where I was amazed by the spiritual energy. It did not take long until I signed up to be a student.

Aish was wonderful. From the positive loving support, to the philosophical discussions or being super respectful even when we had disagreements I felt like I was home. Friends I made here I consider to be some of the most genuine people I ever met. I have personally witnessed people’s lives transform from low self esteem to high confidence with a newly found affirmation towards life.

The culture pushes responsibility to do great things. Students find purpose in ways to improve the world and believe in their ability to do it. Whether that’s philanthropic, scholarship or inspiring other Jews, Aish builds leaders. It’s a primary component on what makes Aish different from other yeshivas. They want us to become lights upon the nations and to be leaders wherever we go.

I saw firsthand in college the lack of respect for the beautiful diamond called Judaism Jews have but don’t even realize. I want to help Jews discover the infinite treasure that can make anyone a better person. Aish helped build me to grow in leadership and capability to make that a reality.

In the yeshiva little upgrades no one asked for, such as a milk machine at breakfast or hot soup in the winter made me feel like my overall happiness was a key priority to Aish. I also wanna point out the improvisation when something spontaneous happens that would be a great mental or spiritual support. This includes helping students find ways to attend Rabbi Chaim Kanievsky’s funeral and communicating with students when tragedy struck on Lag B’Omer to make sure everyone was counted, safe and returned back to Jerusalem.

The greatest thing Aish did for me and my fellow students was remaining open when COVID first hit and took on the added pressure and responsibility of keeping the dorms open. We had Seders at Aish while our rabbis were not allowed into the old city. Everything was student led. Students who only just learned what Passover was were now leading prayers and giving speeches during the Seder. One tenured student spoke up and said, “What is Aish? Aish is the place where there can be a global pandemic and we don’t have our Rabbis so our long term students become Rabbis themselves and help the new guys and the new guys learn how to lead their first ever seder.” It truly was a magical experience.

Aish culturally isn’t the only great thing. The location is the best place in the world. If I knew there was going to be a global pandemic and was asked where I’d wanna be for it I would have said the Kotel which is exactly where I ended up. In fact, I could see the wall everyday from my bedroom window! During one of the lockdowns when no one was allowed to enter the Old City I was the only person in the world at the Kotel at one point during Yom Kippur. “Why me?” I asked myself. There are people who appreciated the high holiday more than me and who actually knew the words in the siddur and here I was, sitting at the wall while the people who have been observant all their lives were denied access. Truly spiritual and memorable.

Before graduating college my friends thought I was crazy and asked why I was going to an orthodox yeshiva if I was not orthodox. I said because if I wanted to learn Judaism I wanted to learn from people who actually practice what they preach. It was a bit different from the liberal college campus I previously lived on and the yeshivish world is definitely not like anything I grew up with but I was welcomed like family from the beginning. Seeing how the religious world is super family oriented with stable homes full of children and marriages that last, I know this world is one I wish to incorporate into my life.

I knew the history of Jerusalem’s importance to the Jewish people ever since I was a little kid. I have a Jerusalem poster over my bed in New Jersey so it’s always the first thing I see in the morning and the last thing I see at night. I also knew my ancestors would have done anything to be there but were denied access for two thousand years. It feels to me that the greatest way I could ever honor my ancestors dating back a couple millenia was to learn Torah at the epicenter of our faith. At the holiest site in the world. At Aish HaTorah across from the Temple Mount.

I am beyond grateful I took a chance and did something different than my peers and American society. I really feel like I have growth in leadership, thirst for knowledge, affirmation towards life, connection to my religion, the desire to spread Jewish wisdom to the four corners of the world and inspire the whole Jewish nation to want to have a deep connection with the precious diamond they don’t realize they have.

Thank you Aish for the last three years. It truly has been one of the greatest experiences of my life.