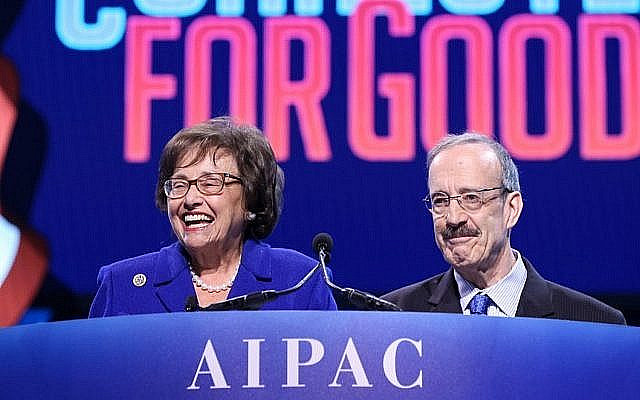 Washington is very much focused on the new Congress that will be sworn in this January. New committee chairs and ranking members are being chosen, freshmen are deciding which committees to join and great attention is focused on the Georgia Senate runoffs that could determine which party leads the U.S. Senate.

While we are getting ready for the 117th Congress, it’s important to pause and thank those members who are not returning for their years of service.  Representatives Eliot Engel (D-NY) and Nita Lowey (D-NY), long-standing pro-Israel stalwarts, are two such members who will leave Congress in January.  The entire pro-Israel community, on both sides of the aisle, will miss their extraordinary leadership and dedication.  They both leave incredible legacies for their work to advance the U.S.-Israel relationship.

First elected to the House in 1989, Representative Nita Lowey rose to become one of the most powerful members of the U.S. Congress, taking the helm this year of the House Appropriations Committee.  As chair, she plays a key role in deciding which government programs get funded and which don’t.  Lowey, the first woman to chair this committee, has developed an incredible reputation as an effective lawmaker who is always able to get things done on a wide range of issues, including America’s relationship with Israel.

When she became chair of the full committee she also chose to lead its Subcommittee on State, Foreign Operations, and Related Programs because, as she put it, “it was important to make sure that the partnership between Israel and the United States remains strong.”  It says a lot about her commitment to the U.S.-Israel relationship, as do her actions over the years.

Lowey consistently and vocally worked to support a closer and stronger alliance between the United States and Israel.  She ensured funding for strategic U.S.-Israel military cooperation, helping ensure Israel had the ability to defend itself from attack.  She has fought efforts to condition and curtail that support, opposed the Boycott, Sanctions and Divestment (BDS) movement, and challenged Congresswoman Ilhan Omar’s suggestions of dual loyalty.

As she stated in an interview earlier this year: “The work that I’ve done regarding the Israel-United States relationship almost makes me feel as [though] I’m carrying on l’dor v’dor, the tradition…it’s very important to continue that relationship.”  L’dor v’dor is the Hebrew expression meaning from one generation to the next.

One final bill she authored, the Middle East Partnership for Peace Act of 2020 with co-sponsor Rep. Jeff Fortenberry (R-NE), would provide $250 million over five years to facilitate joint economic ventures and “people-to-people” programs between Israelis and Palestinians. This legislation, which Congress is working to pass right now, will be a wonderful part of her legacy and her enduring efforts to promote peace between Israel and her neighbors.

Also elected to the House in 1989, Congressman Eliot Engel quickly developed a reputation as one of the strongest advocates in Congress for a close U.S.-Israel relationship. His colleagues have praised him as a gentleman committed to serving the public.

Throughout his three-decade tenure in Congress, and in his role as Chairman of the House Foreign Affairs Committee, Engel has consistently worked to build strong coalitions of support for a strong U.S.-Israel relationship and policies that ensure Israel has the resources it needs to protect itself from hostile regimes and terrorist groups, including Iran, Hamas, and Hezbollah. Like Lowey, he has fought against BDS and challenged antisemitism in Congress and beyond.

At the same time, Engel worked to build on our strategic alliance by advancing economic ties between both countries. As he recalled in a recent interview, “[The U.S.-Israel relationship] is no longer built on security and cultural ties, but on economic ties and cooperation in every sector, supported not just by Jewish Americans but by all Americans, or many Americans, and Israel is a strategic partner in every sense of the word.”

As we celebrate the many accomplishments of Rep. Lowey and Rep. Engel, I hope that friends on both sides of the aisle will honor Congressman Engel and Congresswoman Lowey’s legacies by resisting efforts to use Israel to score partisan political points. Instead, let’s continue to strengthen our efforts to make the U.S.-Israel relationship a bipartisan priority – and add onto the significant successes we’ve already achieved on the path toward peace in the Middle East.

Rep. Lowey and Rep. Engel leave big shoes to fill at a critical time.  While the pro-Israel community will miss them, we are fortunate that so many new and returning members of Congress share their passion for a close U.S.-Israel relationship.  At this moment, we will help honor their legacy by working closely with the next generation of pro-Israel leaders in Congress to build on the strong bipartisan foundation they have built.