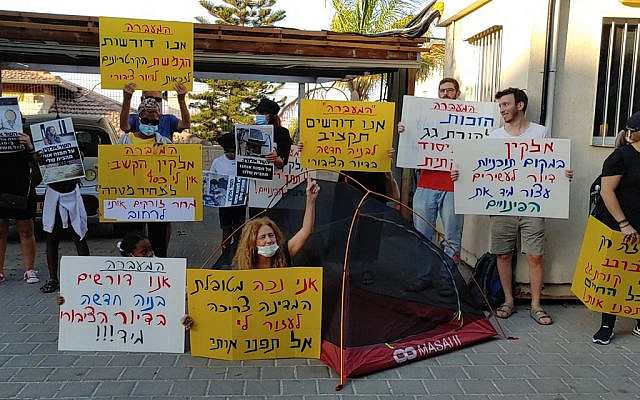 Sukkot and Shemini Atzeret/Simkhat Torah are both considered “Zman Simkhateinu” (The Season of Our Joy). However, our joy is also tempered. Our farmer ancestors were quite aware of this. They were in a better financial situation than any other time during the year if the harvest was good, and also desperately anxious that there be sufficient rain at the right time. The prayer for rain we will recite tomorrow was likely the key element of this entire holiday season. For those of us who are not farmers (or work with farmers and shepherds as I do), our sages ordained that read Ecclesiastes on the Shabbat that falls during Sukkkot. It sobers us up rather quickly, with a bit of hope at the end. We have also been dwelling in a sukkah, which can be rather fun if it isn’t too cold or rainy. However, we are taught that the sukkah is meant to teach us something about the fragility of life if God doesn’t spread God’s protective shelter over us. This connects to the warning we hear repeated again and again in the Bible, that we forget God when all is well.

Our sages were wary of excessive joy for various reasons, including that it ignored the realities of our not yet redeemed world:

What is the meaning of rejoice with trembling? Rav Adda bar Mattana said that Rabba said: One may not experience unbridled joy; even where there is rejoicing, there should be trembling.

On that note, the Gemara relates: Abaye was sitting before his teacher Rabba, and Rabba saw that he was excessively joyful. He said to Abaye: It is written: Rejoice with trembling, one’s joy should not be unrestrained.

Abaye said to him: It is permissible for me because I am donning phylacteries now and as long as they are upon me they ensure that the fear of God is upon me.

Rabbi Yirmeya said to him: It is permissible for me because I am donning phylacteries.

On a similar note, the Gemara relates: Mar, son of Ravina, made a wedding feast for his son and he saw the Sages, who were excessively joyous.

He brought a valuable cup worth four hundred zuz and broke it before them and they became sad.

The Gemara also relates: Rav Ashi made a wedding feast for his son and he saw the Sages, who were excessively joyous. He brought a cup of extremely valuable white glass and broke it before them, and they became sad.

Similarly, the Gemara relates: The Sages said to Rav Hamnuna Zuti at the wedding feast of Mar, son of Ravina: Let the Master sing for us. Since he believed that the merriment had become excessive, he said to them, singing: Woe unto us, for we shall die, woe unto us, for we shall die. They said to him: What shall we respond after you? What is the chorus of the song? He said to them, you should respond: Where is Torah and where is mitzva that protect us?

In a similar vein, Rabbi Yoḥanan said in the name of Rabbi Shimon ben Yoḥai: One is forbidden to fill his mouth with mirth in this world, as long as we are in exile (ge’onim), as it is stated: “When the Lord returns the captivity of Zion we will be as dreamers” (Psalms 126:1). Only “then will our mouths fill with laughter and our lips with song” (Psalms 126:2).

And yet, along with their decision that we read Ecclesiastes, we are taught that they celebrated Sukkot with almost wild abandon, and that one who had not seen these celebrations had never seen joy in his/her life. )Mishna Sukkot 5:1)

I relate more to our sage’s statements in the Talmud than to Ecclesiastes.  I don’t believe that everything we do is futile, or that there is nothing new under the sun. When I pray “Are not all the heroes as nothing before You, those of great renown as if they didn’t exist? The intelligent as if they no nothing, and the the wise as if they lack understanding?,” I skip “For all our deeds are chaos, and the days of our lives futility before You.  Humans are no better than other beasts, for all is vanity.” I proceed to where we recall that as descendants of Abraham we are covenantal partners with God, and therefore “Ashreinu.” In spite of our human limitations, we are blessed and lucky to serve God.

In his last interview shortly before his death, Rabbi Abraham Joshua Heschel was asked if he had a message for young people.  He answered,

“Let them remember that there is a meaning beyond absurdity. Let them be sure that every little deed counts, that every word has power, and that we can do, everyone, our share to redeem the world, in spite of all absurdities, and all the frustrations, and all the disappointment. And above all, remember that the meaning of life is to live life as if it were a work of art…” (From Heschel’s final interview with NBC-TV journalist Carl Stern, December 4th, 1972)

Similar to some of our sages, I do ask whether it is possible to be entirely happy when there is so much suffering in the world. Shabbat is “a taste of the world to come,” and one day out or the week we allow ourselves to celebrate as if the world is perfected. But, seven days? Eight days if we count Shmini Atzeret/Simkhat Torah? Nine days outside the Land of Israel?

The penultimate verse of Ecclesiastes is “the sum of the matter, when all is said and done: Revere God and observe God’s commandments! For this applies to all humankind:” Forget about the search for wisdom, recognition and accomplishments. Forget about simply pursuing pleasure, or any of the other pursuits that Ecclesiastes tries. Simply observe God’s Commandments, and it will be well with you. Ashreinu. We will be blessed. Many see this as a late addition. Others as a cop out.  Late addition, or not, it is not a cop out.

What exactly does God command is arguably a matter of debate and arguably a lifetime pursuit.  “Seek God always.” (Psalm 105:4) When I recite our blessed obligations that precede Ashreinu, I add to the traditional list our obligation to serve God as God’s partners in Tikun Olam (repairing and redeeming the world) as best we humanly can. I do so realizing that “You are not expected to complete the task, but neither are you free to desist from doing your part” (Pirkei Avot 2).

However, I do believe that, in spite of the absurdities, frustrations and disappointments, and in spite of all of our shortcomings that we reminded ourselves of through Yom Kippur, that which sobers us can ultimately help us make this the season of our joy. When the Sukkah speaks to us, making us partners with God in spreading a protective and empowering shelter over fellow human beings in need, we bring joy into our lives, and into the lives of others. We joyously dance both physically and spiritually with the Torah when we make that penultimate verse from Ecclesiastes a reality in our lives.

One of the most meaningful acts I took part in this Sukkot was attempting along with families in danger of being evicted from public housing, to set up a Sukkah next to the home of Housing Minister Zeev Elkin.  I am usually not in favor of demonstrating in front of sombody’s home, but when that somebody is endangering the homes of others, it is kosher. The Ministry has reversed the policy of the previous government, and has evicted some 90 needy families from public housing.  This is supposedly in order to give the apartments to those on the waiting list. However, rather than evicting one needy family for the sake of another, it would make sense to evict NGOs and urban kibbutizim that have been given public housing apartments, and/or increasing the number of apartments. We wanted the Sukkah to fulfil its traditional purpose of sensitizing Minister Elkin to the need for shelter and his ability to provide it.  When police squad car after squad car arrived, ti became clear that these families, some of them with eviction dates in October, could not even create alternative shelter for themselves where Minister Elkin would need to see what he was causing. We can only hope that we will succeed in delivering the message in other ways. On Saturday night, Economy Minister Orna Barbivai promised activists that she would speak to Minister Elkin about the recommendations of a committee she chaired not to evict families from public housing. 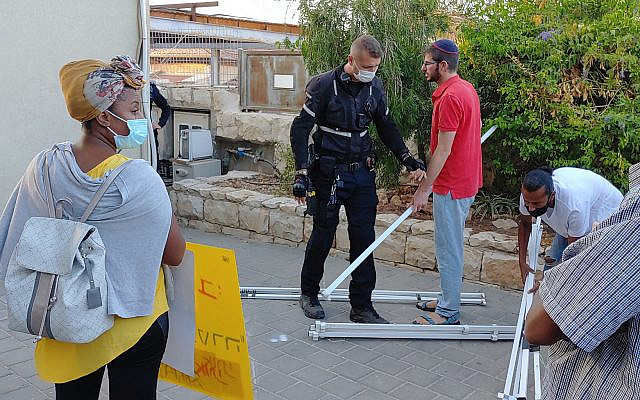 We attempt to build a sukkah

As I contemplated over this past week what was my spiritual harvest this past year, as well as that of Torat Tzedek (The human rights NGO I direct) and the State of Israel, I felt that this was a year with more “bikurim,” the first fruits that we would bring to the Temple on the Shavuot holiday, than assif.  The attempt to build that sukkah and subsequent efforts to get Minister Barbivai to take a stand are first fruits, as is the groundwork we have laid to save the thousands of dunams from settler takeover. Evictions have not yet been refrozen, nor have the takeovers been definitively prevented. Families we have housed may be a more full blown accomplishment.  Our joy must still be tempered, and we cannot say that our work is done, or simply be satisfied because we have made an effort. But, there is also joy in bikurim. I believe that our first fruits will lead to the harvest. It is not guaranteed any more than rain, but it is truly realistic to believe that we will stop evictions (maybe also in East Jerusalem) and takeovers. We can therefore joyfully celebrate that we are dancing with the Torah when we continue to do our best to fulfill our vital and essential role. Ashreinu. Khag Sameakh