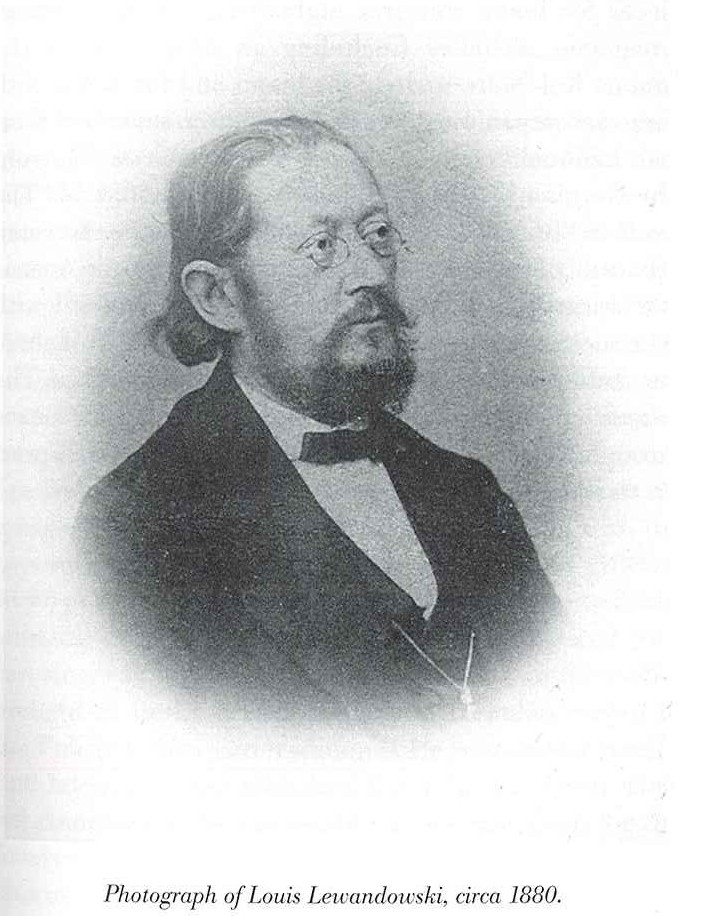 (Image in the public domain)

Over the past few decades many Shul goers have become familiar with the concept of the “Carlebach Minyan.” The late, great 20th century Neo-Chassidic composer created a repertoire of tunes which has enhanced the experience of our Shabbat services. But besides Carlebach, how often do we think about the composers behind the beautiful traditional songs that enlighten the spirituality of our prayers?

The 1st of Nissan, corresponding to the 14th of March 2021, marks the two-hundredth anniversary of the birth of Louis Lewandowski, one of the outstanding members of the cadre of 19th Century Jewish Choral composers. His greatness is reflected in the fact that to this day, many of his pieces are sung in shuls and concert halls around the world. Without many of us knowing, a huge number of Ashkenazi Jews, reform to hareidi, sing Lewandowski’s beautiful settings to a number of our prayers, among them, “Lecha Hashem Hagedulah” and “Tsaddik Katamar Yifrach.” (See minute 4:11 of this video)

Lewandowski was born in Wreschen, then in Prussia, now part of Poland. His poverty-stricken parents and teachers recognized the inherent musical ability of the young boy and at the age of twelve, following the death of his mother, he was sent to Berlin to study piano and voice and to sing as a solo soprano in the synagogue. At the recommendation of the Mendelssohn family, he was the first Jew to be admitted into the school of composition of the Berlin Academy of the Arts.

The Emancipation of European Jewry and its accompanying “Age of Enlightenment,” were in full swing with Berlin being considered the center of the “Haskalah” movement. The revolutions of 1848 resulted in various civil rights given to the Jews and despite Antisemitism, Jews were flocking from the ghettos to the big cities.  In 1850 there were less than ten thousand Jews in the Berlin. By the turn of the century there were over 100,000. There, far removed from loosely organized “Shtibelach minyanim” they encountered the orderly communal rituals of Christian prayer conducted in impressive churches. One of the main features of these services was beautiful choral singing led by a choir.

Around 1840, the young Lewandowski was appointed choirmaster of Berlin’s Old Great Synagogue, and in 1866  he was installed as choirmaster of the Neue Synagogue, which seated 3,000 worshipers. He was probably the first of his kind as until these appointments, the cantor was tasked with training and leading the choir. 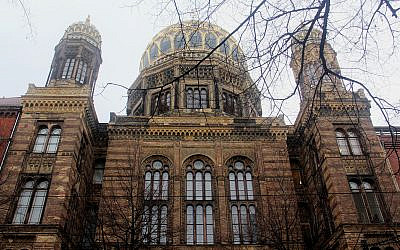 Over a 50 year period, Lewandowski composed and arranged music for services across the Jewish liturgical year. Rather than discarding tradition, he successfully synthesized his works with the time-honored Eastern and Central Jewish musical modes (what we call Nussach.)  Lewandowski himself wrote, “The musical portion of our services can only thrive if we know how to carefully cultivate and artistically shape the immortal melodies that our fathers passed down to us…” At the same time, just like the vast majority of artists through history, his music was shaped by the local culture. He was influenced by the works of Felix Mendelssohn as well as local Germanic folk music.

It is evident that Lewandowski had a deep understanding of the texts, his melodies reflecting the meaning and profound emotion of the words. Wonderful examples are his Rosh Hashana compositions, the soulful, nostalgic “Zacharti Lach,” see here, contrasted with the majestic “Halleluya.” Although he wrote for formal choral ensembles, much of his music can be sung by all who enjoy communal singing.  As eminent Jewish composer, arranger, musician and educator Raymond Goldstein notes, “Lewandowski had the innate ability to write a tune that once heard, was never to be forgotten.”

In his lifetime, Lewandowski was a contentious personality. He zealously protected his status in the community, he promoted the  use of an organ in shul and was accused of plagiarism. However, as in all cultures, if Judaism was to discard the glorious works of its great creative minds who have displayed flaws of character, from King David to Carlebach, we would be left with few spiritual resources.

In 1890 Lewandowski was feted with great pomp by the community on the occasion of the jubilee of his service to the community. He died in Berlin in 1894. 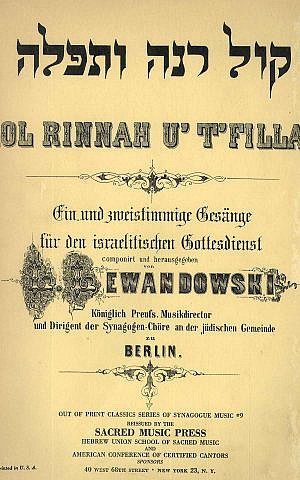 (Image by the author)

His works survived the Holocaust because they were published, mainly in two seminal works, “Kol Rinnah U’Tfillah,” for cantor and “Todah ve-Zimrah,” for choir, solo, and organ. As a result of their great value, these volumes made their way to congregations across the continents.

Over the past decades Lewandowski’s music has been celebrated in many forms.  These include albums by The “Zemel Choir” of London and the Hungarian Radio Choir. The “Lewandowski Chorale, Johannesburg” brings his music to a wider audience and since 2011, each annual Louis Lewandowski Festival in Berlin featuring choirs from around the world, has been attended by thousands of enthusiasts. A tiny example of how his music remains relevant is the fact that at the Friday night “Carlebach Snif Minyan” in Jerusalem’s Ramot suburb, “Tsaddik Katamar” is often included, sung by hundreds of devotees. 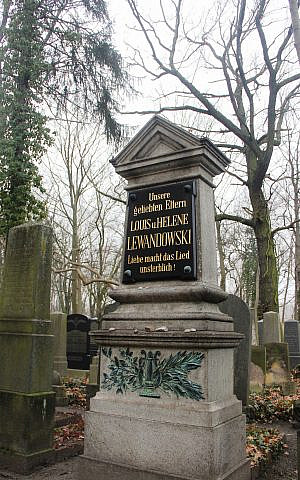 Image by the author

Together with his wife Helene, he is buried in Berlin’s Jewish Weissensee Cemetery. The inscription on their tombstone reads, “Love makes the melody immortal.” If so, it is apparent that Lewandowski’s music emanated from a deep love for his faith and people.

The author is the director of Jerusalem’s Ramatayim Men’s Choir which has performed at the Lewandowski Festival.