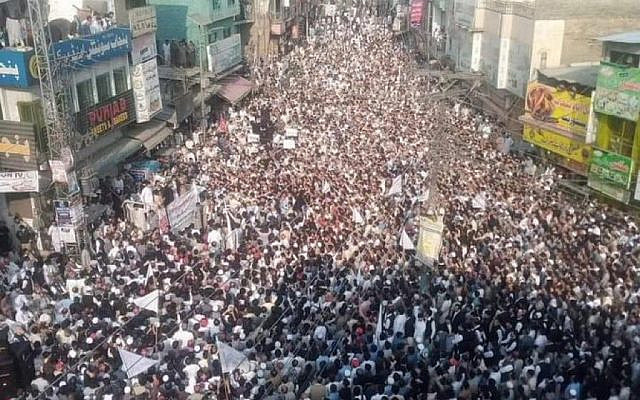 Rally for peace in the SWAT region. (Source twitter: user @________Fifi_ used in accordance with Clause 27a of the Copyright Law)The people of swat REJECT Taliban and TTP.

Militants now hold sway in the tribal belt all along the Afghanistan-Pakistan border, creating a security nightmare for Pakistan which had expected strategic depth with the Taliban control of Afghanistan. The sufferers are millions of civilians displaced from their homes with nowhere to go who join the millions displaced by floods in Pakistan.

Reports emerging from the region indicate that Pakistan can neither prevent its militants from using the Afghan territory, nor can it prevent Afghan militants from intruding into its territory.

Half a million civilians have been uprooted from their homes in Swat region of Khyber Pakhtunkhwa province of Pakistan. For the last few weeks, cases of terrorism have surged, forcing thousands of locals to stage street protests.

Slogans of “we want peace” were raised in end-September after eight people, including a former “Aman” (peace) Committee head and two policemen, were killed by a remote-controlled bomb that struck their vehicle in the Ghlo Kandaw area of Kabal tehsil in Swat valley.

Seeking peace in the terror-stricken valley, the agitators comprised a large number of youths, elders, lawyers, transporters, traders, doctors, and students who held placards inscribed with slogans against the terrorists and seeking peace, Dawn reported.

The Express Tribune newspaper said in an editorial September 3, 20220: “The source of consolation is that political parties across the divide are pouring out to shun militancy, and are on the same page in seeking a credible firewall of deterrence.”

The flashpoint was evident as members of local peace committees were attacked last month in Kabal tehsil, which led to the killing of six including police personnel. Since then, houses and businesses are under attack from militants.

The protests are catching on. Besides lambasting the government for not taking appropriate actions against terrorists and the surge in criminal activities in Pakistan, protestors also questioned the silence of Chief Minister Mahmood Khan and the elected representatives over the matter.

Media reports say militancy and violence are on the rise as the federal government in Islamabad is busy fighting its battles with ousted former Prime Minister Imran Khan.

The latter, reports say, has been moving in and out of the province that his party, PTI rules, to draw ground support for his agitation against the government while making no contribution to law, order and peace.

The troubled Afghanistan-Pakistan has seen it all before, the one big difference being the advent of the Islamic State Khorasan Province (ISKP) in recent months, which spells trouble for the region and the world as a whole. ISKP is now gaining prominence among the IS divisions, including the one quickly gathering root in Gaza.

To Pakistan’s chagrin, the advent of the Taliban government in Kabul that it facilitated with great hopes, has only resulted in a resurgence of militancy on both sides. In sum, the region is yet again the hub of terrorism and any semblance of control that Pakistan exerted in the region has now vanished creating a security nightmare for the country.

The militants, with or without outside affiliations are essentially Sunni, and this explains why repeated attacks take place on Shia and Hazaras. The ISKP considers Shia as heretics. Even otherwise, the majority Sunni in both countries has been hard on Shia, Hazaras, and other minority groups, no matter who rules there.

Western media has reported killings of Hazaras by the Afghan Taliban, firing in the air to subdue women protesting over the death of a young girl, a Shia, in Iran and a suicide bomber exploding at a Shia-run school, preparing for their examinations, killing 43 of them.

The situation has become complex with both governments blaming each other while doing little about cleansing their respective regions of militancy.  Kabul insists that there are no militants, and no foreign groups on its soil, while it is fighting the ISKP.  Islamabad has taken to official protests against Kabul’s failure to do the same.

The Express Tribune editorial blames it on a “feud between various non-state actors pushing hordes of gun-trotters into Pakistan.”

It has warned: “While Afghanistan is slowly slipping into anarchy, its repercussions will surely be felt across the porous borders.”

“With more than three million people languishing on Afghan borders, helpless as they face food and shelter problems, the non-state actors will try to disguise and sneak across the porous borders. Time to up the guard on frontiers and ruthlessly mop Swat of militants and their abettors,” it has further warned.

Swat is on the boil even as Islamabad tries, with little success, to persuade Kabul to either evict the Tehreek-e-Taliban Pakistan (TTP) cadres operating from its soil or at least, broker a peace deal. After one was struck in November last year and failed and the TTP unilaterally ended a ceasefire, Kabul has taken it easy, contending that this is Pakistan’s “internal problem” to be settled locally. This has changed Islamabad’s once-friendly stance to subdued hostility and mild diplomatic protests, and Kabul has also paid back in the same coin.