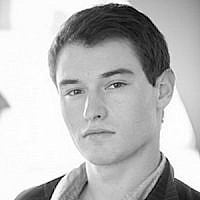 The Blogs
David Chernobylsky
Apply for a Blog
Advertisement
Please note that the posts on The Blogs are contributed by third parties. The opinions, facts and any media content in them are presented solely by the authors, and neither The Times of Israel nor its partners assume any responsibility for them. Please contact us in case of abuse. In case of abuse,
Report this post.

The year 1943 was a blessing and a curse. Yet, we can only say this now looking back. Even after numerous decades, this year strikes fear into the hearts of thousands, even millions—it remains a symbol of human triumph as well as human treachery.

The year 1943 was that year the world flipped right-side up again. It was the year of the turning point in the history of the Second World War. But the years leading up to 1943—1942 and 1941—can only be a deadly curse upon the wickedest of worlds. In the years 1941 and 1942, the bloody petals of man’s most darkest and devious nature blossomed to the shimmering sunlight of artillery fire under the crackling sounds of deadly cannons singing like dilapidated Jack-O-lanterns.

In the two years preceding 1943, hundreds of thousands of Soviet soldiers died fighting against the Nazi forces as they invaded further into Soviet soil. The Ukraine was one of the first thick slices of juicy human sustenance and life force that the Germans managed to seize control of within the first two weeks of their invasion. But that same cannot be said of 1943. The year 1943 was a year of change—things started to turn in favor of the Soviets, despite the thousands of Ukrainians that had already been slaughtered and with them hundreds of thousands of Jews living in those regions.

Babi Yar, to this day, is remembered as the event in in 1941 in which a abysmal pit was dug by a hundred thousand Ukrainian Jews, after which those very same Jews were lined up in rows before the ditch and shot point blank, their bodies flinging and ricocheting into the ditch like flailing table cloths ready to be served their last meal; incidentally, they had been forced to dig their own graves.

But it did not end there, for Babi Yar lasted for several weeks. By the end of the first day, over 105,000 Jews lay dying in the giant heap of decaying human mass. Yet while most of the mass was composed of people which were dead or dying, there were some unfortunately tragic souls who lay suffocating or still fighting the threat of death to try and squeeze past the countless bodies of that death mound to escape and hide in horror of the terrible memories they had to endure. After four weeks or so, the mound finally stopped moving.

This is why after so much horror and tragedy, the year 1943 erupted as a shining light of unfathomable proportions in the history of the war.

This also happens to be the same year my grandfather, Dedushka Yusia, met my grandmother, Babushka Rita, shortly after which they married and subsequently spent the rest of their long lives together deeply caring for one another and sharing a love so strong it would befit the jealousy of kings and queens.

But in 1943, Babushka Rita was a still just young and beautiful 20-year-old, third-year medical student who had been evacuated from her medical school in the Ukraine to one in Asia, located in Samarkand. This way, she and the rest of her medical school classmates were able to continue their education without the dangers of the Nazi forces. Also, in the same year, Dedushka Yusia had been recently appointed to a high-ranking lieutenant position in the Soviet Army, and at the young age of 24.

His rise in rank was so sudden due to the onslaught of the war. After all, for every German killed, ten Soviet soldiers lay dying in his place. Stalin, the Soviet Union’s leader at the time, did not hesitate to throw Soviet soldiers as castaway canon’s meat to the German forces. He had millions upon millions to spare. Why did he need worry about tactics when all he needed to do was drown the German soldiers in the blood of their own kill?

It is known that while the Germans used heavy artillery and hand-machine guns, the Soviets used bayonets and cannons because within the first two weeks of the German invasion, almost all of the Soviet planes, heavy artillery and sophisticated weaponry was obliterated. So, as my dear father told me, if you were a Soviet soldier and you saw an oncoming German tank, the best thing to could do was to strap on a handful of grenades to your back and jump right into the path of the oncoming tank. Forget the canon you were manning, it was of no consequence any more. At least, this way your friends and family back home would have a chance to survive.

This is exactly what my Dedushka Yusia witnessed as he manned his own five cannons against the forces before him. He had to endure this countless times as his fellow comrades fell before the barrages of oncoming tanks!

He had only meant to stay in the army for the two years necessary in his post-Revolutionary Communist Russia. In those two years as a soldier, he carried and manned the telephone communications for the high ranking Generals. Yet, with the sparking of the Second World War, he was required to continue his service and assume artillery and combat roles even as he witnessed his comrades die in the pits of the many battles he had endured.

By 1943, he had risen to the position of lieutenant of his legion and was venerated by many medals of honor and bravery in battle. But as fate would have it, he was wounded in battle when the shrapnel from a renegade cannonball landed in the flat of his back, almost piercing his heart from the backside. He was swiftly transported away from the front lines, away from the Moscow area where the first decisive victory against the Germans was fought, and onto a medical train which kept him in stable condition until he was delivered to the medical hospitals of the injured soldiers in Samarkand. Yes, the very same.

In fact, within the first few weeks of his stay at the hospital there, he received a letter from his aunt-in-law telling him of a relative she wanted him to visit once he had healed. This relative was of no relation to him, but was the favorite niece of his aunt’s husband. This niece just happened to be my grandmother, Babushka Rita.

But Dedushka Yusia didn’t know that. In fact, all he knew as he stood in front of her whitewashed, wooden apartment door was the address he was given inside his aunt’s letter and the promise of some good food inside his starving stomach.

He stood in front of the door, contemplating on his knock. He was a strong man and many metals adorned his uniform, albeit his cast was feeling a little heavy and uncomfortable as the elastic bands strained the muscles in his neck and shoulders. His back still ached from the shrapnel which had sufficed to spare his life on that faithful day in the battlefield. Instead, it had brought him here. A serendipitous thought, he pondered to himself as he rat tapped the wooden apartment door

From inside, the door unlocked and at first it opened just a crack and then a bit more. Inside stood Rita. She was a good two heads shorter than Yusia but the moment her gaze caught his, a sudden sparkle like that of a thousand diamonds burst in her eyes. As Yusia looked at Rita he could immediately tell that the sparkling gaze with which she held him now would be the very same that would never let him go.

She asked him to please come in, both into the room and into the rest of her life.

An Excerpt from the forthcoming book, THOSE WE LOVE, by David Chernobylsky. Retold in dedication to David’s dearly beloved father, Gennady Chernobylsky (1956-2015).

About the Author
David J. Chernobylsky is a medical student at Tulane Medical School. He graduated UCLA in 2016 and is the author of "The Perspective: A Medical Volunteer Experience" (Nobyl Books, 2012) and recipient of the 2014 Jewish Academic Innovation Award. He loves scuba diving and puppies.
Related Topics
Related Posts
Comments