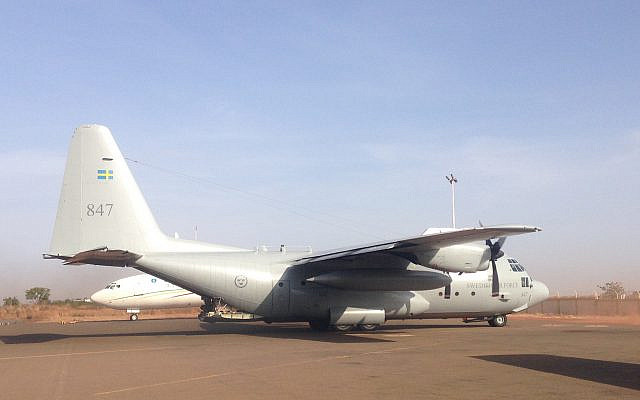 The plane stood out from the crowd. It was gray. 302 seats were available. Most of the seats were so-called hanging bunk seats where you basically sit in your little bunk strapped on. In the middle there were rows of six seats filled to the brim. In the forward part all luggage was thrown in. The rules were easy – do not get up from your seat, there is one bottle of water each, the flight will take 7 hours. The toilet is only for the crew. Accept it or pee your pants. No photos.

A balagan, commotion, occured when the crew of 6 who initially flew down the aircraft came to the set-aside boarding area and told that 6 passengers would not board. One of those was me. I just happened to be singled out. I set aside all civilized swedishness I had acquired and turned full Israeli. “I am having a spot on that flight! I have a family at home! I have a job! Look at the rest they usually live here and just seizes the opportunity to get a free flight home! They can go to hell! They have an apartment to return to, I do not!”I excluded all swear words which were a mix of Spanish, Swedish, Arabic and Hebrew. I got my spot.

The next phase included Spaniards and counting. They counted us at least 10 times, comparing us to the list they received and all seemed fine until the Swedes started counting. 8 people too much. It was impossible to fit them in the plane. No way José! They were left with their luggage on the tarmac.

I’m writing this as I’m flying, I do have a conscience. I do understand and I do feel for the people who were left stranded. I know they can buy an ordinary ticket and just get the f*ck home. But it was not the place and time for me to put on my hero cap and scarf. These were Swedes who live in Spain. I don’t. So yes, of course I don’t know their history or why they were supposed to be on this flight. But go ahead and call me an A-hole. I’ve already given up 5000 euros to Spaniards in need. I helped out every single one that needed help. At my hotel. Outside the hotel. Anywhere and everywhere. What more could I do? Have I cleared my conscience? Of course not. This will be my next mental battle to fight, while being in some sort of semi-quarantine.

I have some things I need to come to peace with and accept. Sound and smart people have helped me along the way. To be honest those 12 days in Spain have been nothing but a surreal nightmare. Now I will in a few hours touch down at Oslo airport in Norway. Norway has imposed draconian lockdown on the entire country. The Swedish Prime Minister will speak to the nation tonight 21:15 CET. When the Prime Minister speaks to the nation in Sweden, you know it’s serious. It’s not one of King Bibi’s countless video comments on everything every now and then. The last time this happened was during the Tsunami in 2003/2004 which struck Asia and Thailand. Another occasion was the sinking of M/S Estonia in 1994 – where 800+ citizens drowned in the storm of the Baltic Sea. Oh wait – yeah. The terror attack in Stockholm 2017 was also the case for the Prime Minister to speak. Otherwise – quiet.

So – there will be a lockdown in the Nordics as well. No question about it. The army is building field hospitals at record speed.

And what am I doing? I am having a mental breakdown because of my conscience. Of the stress. Of seeing all the frightened people. This has gotten totally out of control. Swedish people are like the Japanese – you stand in the line and wait for your turn. This was a scramble to get on the flight. I still can not believe what I did. I took a spot instead of someone else’s. I will have to live with this for a very long time. If I would meet those people left behind, I would bow my head in shame and rewind everything. What if it was me left behind? Well I don’t know if I would forgive myself for staying either. I have a family. A smart, well-educated and friendly wife. Should I have given up my spot to the stranded people and miss my family even more?

Now I’m finally cleared – tested negative for Corona and can continue my journey home from an eerily empty Oslo. Bye Norway, may I don’t see you again in a long, long while.