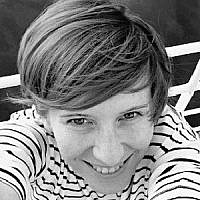 The Blogs
Laura Callisen
Apply for a Blog
Advertisement
Please note that the posts on The Blogs are contributed by third parties. The opinions, facts and any media content in them are presented solely by the authors, and neither The Times of Israel nor its partners assume any responsibility for them. Please contact us in case of abuse. In case of abuse,
Report this post.

Herzl Rosenblum was born in 1903. Sadly, in his home city, Herzl was the victim of anti-Semitism and was not allowed to become a law student. Rosenblum moved to Vienna to further his education. He eventually settled in Palestine after a stint in London to work for a newspaper, the Haboker. While he was working for the Haboker, Rosenblum adopted the pseudonym, Herzl Vardi. During this time period, Herzl Rosenblum became involved in the Revisionist Zionism movement. His association with Vladimir Jabotinsky was what caused Herzl Rosenblum’s introduction to Revisionist Zionism, and what would influence Herzl Rosenblum to join the movement. Jabotinsky was the founder of Revisionist Zionism, and this would later factor greatly in Rosenblum’s influence on the development of Israeli culture. Herzl Rosenblum was one of the signers of the Israel Declaration of Independence in 1948. Under pressure, he signed the document as Herzl Vardi. He later expressed regret that he had not used his birth name. Mr. Rosenblum finished his journalism career as the editor of the Yedioth Ahronoth. His son, Moshe Vardi eventually followed in his footsteps and became editor of the publication.

Herzl Rosenblum was very active in the Revisionist Zionism movement. This movement played a key role in the establishment of Israel as a political state. In fact, Revisionists believed that the establishment of a Jewish state was needed because Jews were entitled to control over the entire land that was once all of historical Israel. This includes what is now present day Israel, the West Bank, Gaza, and Jordan. As part of this movement, Rosenblum supported the idea of taking a firm stance against any territorial rights of Arabs or British in this area. While this initial goal was not achieved and ultimately modified significantly, the transformation of early Zionism to a more secular and political one.

In addition to his desire to establish a Jewish territory, as a Revisionist, Herzl Rosenblum also supported the establishment of military training for Jewish youth. This is one example of Rosenblum’s far reaching influences over Israeli culture today, as all able-bodied young adults in Israel must commit to a time of military service.

It may have been the anti-Semitism Herzl Rosenblum experienced in his youth that drew him to Revisionist Zionism. Many believers in this ideology felt as if Jews were not safe out in the world due to anti-Semitism, but that they would be safe within the borders of a Jewish majority state. Herzl Rosenblum was a strong advocate of the emigration of Jews from all over Europe to the land that ultimately became the state of Israel. In addition to reasons of safety, Herzl Rosenblum and other followers of Revisionist Zionism believed that Jewish entrepreneurs would be able to pursue educational and business opportunities that had been denied to them in their countries of origin. In fact, Revisionist Zionists felt so strongly about this that, in the 1930s, they pressured governments in Europe to allow Jewish citizens to freely leave their countries in order to establish residency in what is now Israel. Further, the much earlier Balfour Declaration (1917) that was a part of negotiations that began the end of World War I, gave the Revisionists greater justification for their secular and political advocacy of Israeli statehood.

In 1948 Herzl Rosenblum was one of the three members of the Revisionist Zionist Alliance who sat on the provisional state council. The provisional state council was a temporary legislative body that was established prior to the declaration of Israeli independence. This legislative body came to power before the Declaration of Independence was signed, and it remained in power until the first official elections were held in the year 1949. Unfortunately for Revisionist Zionists, the establishment of the Israeli state did not meet all of their wishes. They did not receive control of the entire region, in spite of their belief that they were entitled to that. However, they did receive acknowledgment of Israel as an independent nation that had a right to exist.

The majority of Benjamin Netanyahu’s political policies are heavily influenced by the beliefs of Herzl Rosenblum and other Revisionist Zionists. This includes his aggressive and conservative foreign policy strategies, and willingness to use military force to maintain Israeli sovereignty in the Middle East. And, the continued Jewish settlement on the West Bank is certainly a part of Revisionist Zionism.

Rosenblum has clearly influenced political ideology of the conservatives in Israel and is one of the heroes of older Israeli Jews who see him as one of the heroes in the movement to establish an independent and militarily strong Israel. As Israel evolves, and as younger generations come to positions of leadership, it will be interesting to see how the ideologies of Rosenblum and other Revisionists can be blended with the more practical ideologies of youth.

About the Author
Laura Callisen is an inspired blogger who works with educational and cultural issues. She always tries to share her discoverers though to motivate people for studying. Therefore if you want to contact Laura feel free to do it via social profiles.
Related Topics
Related Posts
Comments