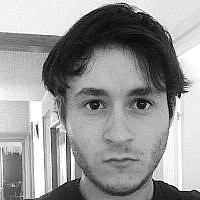 The Blogs
Micha Efron
Apply for a Blog
Please note that the posts on The Blogs are contributed by third parties. The opinions, facts and any media content in them are presented solely by the authors, and neither The Times of Israel nor its partners assume any responsibility for them. Please contact us in case of abuse. In case of abuse,
Report this post.

My past week was characterized by a comical juxtaposition of imagery. On Wednesday I watched the footage of the American riots at the capitol. On Thursday I watched Star Wars: A New Hope. As time passed, two visuals remained with me – the first was of an angry mob, violently storming the congressional building, and the second, of a young Harrison Ford piloting the Millennium Falcon through a barrage of enemy lasers. The dichotomy between the two runs much deeper than their soundtracks; one was a picture of pandemonium, a lurid depiction of carnal rage, hate and treason, while the other was the story of courage, perseverance in the face of overwhelming odds and the triumph of good over evil. One I found exciting and uplifting while the other filled me with shame and anxiety. One was set overseas among the marble monuments of Washington D.C, and the other, in a galaxy far far away.

The inherent disparities between the two scenes make the suggestion of even a tenuous correlation between them sound absurd. The comparison is challenging to begin with, seeing as we approach films and newscasts with significantly different mindsets. However, if we could set them aside and consider what we’re watching unprejudiced by the context in which we’re watching it, aesthetic similarities do arise. If I had seen the events unfold at the capitol sitting in a movie theater and not on the evening news, I might have been enticed to root for the rioters.

As I contemplated this, I was reminded of something I had studied in my high-school philosophy class, about Plato’s theory of forms, as presented in his “Allegory of the Cave”. In essence, Plato asserted that the physical world is composed of imperfect embodiments of what he called “ideas”, or in other words, that there was a superior plane of being which was paralleled by the flawed material representations we’re familiar with. He also believed that humans are born privy to the world of ideas, but forget most of it in their infancy and spend their lives progressively recalling it.

To illustrate this concept, albeit in a crude and oversimplifying way, imagine if you will, a table. Picture its size, shape and texture as best you can. Chances are, your mind conjured the image of a medium-sized, plain wooden table, resting on four legs. Though this is in fact, a completely valid way to imagine a table, I invite you to consider the infinite variations that the word “table” encapsulates. It can be any size, any shape, made of any material and constructed with any number of legs, and still qualify as a table. The reason most people would picture the particular design I detailed above, is simply because that is its archetypal form. Regardless of which tables you may have encountered in your lifetime, or what currently is furnishing your dining room, your mind is bestowed with the mystical power to mentally fabricate the quintessential variation of things, begging the Orwellian question, are some tables more table than others?

To grasp the intricacy, and overall complexity of Plato’s theories was, and is to this day, a feat beyond the scope of my comprehension, however, I am persuaded by the notion that we all hold an inexplicable, shared perception of the epitome of things. As for the origin of those perceptions, I personally believe that they most likely derive from our consumption of shared media, settling in our minds through some sort of mental osmosis. We gaze at the silver screen and believe that what we see is the world as it’s meant to be, and that the world as it appears in practice, is nothing but an imperfect representation.

Though false ideas have always existed, the age of television has greatly accelerated their propagation. In our flatscreen society, we unwittingly shape our ideas and perceptions according to their distorted and unreasonable depictions in movies and TV; Bravery has become a soldier, charging headstrong into the heat of battle and intelligence is a janitor working at MIT, solving complex mathematical equations afterhours. We watch formulaic sitcoms and become subconsciously convinced that friendship looks like an entourage of inhumanly bright and beautiful 25-year-olds, sitting together in a bar or a coffeehouse, and that the typical life is a never-ending series of stunts and escapades. We dream of becoming doctors watching House and Gray’s Anatomy, or of pursuing a career in law watching Suits and Legally Blonde, we admire guns and combat watching Mission Impossible, and define the word ‘hero’ using a vocabulary we acquired watching Marvel movies. It is an influence which frames our understanding of, and feelings about, nearly everything we know, and touches every aspect of our lives. And no matter how much we criticize it, or how much we publicly meditate on the topic, that influence endures, disillusioning and disappointing us when we don’t look or act like what we’ve seen on TV.

One interesting instance of this effect is our societal interpretation of rebels. Generally speaking, the portrayal of rebels in film and television is exceedingly positive. Countless are the films that pit a defiant protagonist against a malevolent government or corporation (Spartacus, The Matrix, The Hunger Games, Robinhood and Robocop to name only a few). They thrust the hero into an unfair and unbalanced war, which they inevitably end up winning by virtue of their moxie and ethical high ground.

Our admiration for this character type is grounded, I believe, in a more fundamental affinity we have for underdogs, an affinity which possibly stems from our individual aspirations. Perhaps in the narratives of their own lives, many see themselves as ‘the little guy’, suing the world for what it owes them (a view which could also shed light on Donald Trump’s rise to power in the 2016 elections). Rebels are innate underdogs, arguably the purest manifestation of underdogs. By definition, they are a disadvantaged minority fighting a stronger institution. And following the reasoning which casts the rebel underdog as the story’s hero, it becomes the only logical conclusion that the institution oppressing them be the villain. This is another ubiquitous notion which factors into the pride we feel at confronting authority and our attraction to the ‘bad-boy’ motif.

One of the most straightforward depictions of such a clash between rebel underdogs and an oppressive institution in mainstream cinema is the Star Wars saga. It tells the story of a galactic struggle between the ragtag rebel forces and the nefarious empire, which mirrors the fight between good and evil, dark and light. They were pivotal cornerstones in film history, which redefined the science fiction genre and are critically acclaimed for being generations before their time in terms of visual effects. What they did not accomplish however, was a nuanced portrayal of the establishment. The empire was wicked through and through, leaving no moral ambiguity whatsoever in regard to the righteousness of the rebel’s plight, even going so far as to assign each side a color palate that reflected their moral standing.

I don’t condemn the Star Wars films for their simplistic rendering of an evil government. Though presenting the antagonistic in a sympathetic, equivocal way is always appreciated, it is certainly not necessary. The films remain an enjoyable, imaginative jewel in movie culture. Still, as I re-watch the footage of last week’s assault on the capitol. I can’t help but wonder if that kind of rendering has played a role in endearing us to insurgency and making us distasteful of establishments. Of sowing within us an association between government and tyranny, and between rebellion and liberation. If the connection between them sounds forced and farfetched due to the futuristic backdrop of Star Wars, I would point out another cult classic film, V for Vendetta, which ends with the successful detonation of British parliament by the film’s titular hero.

I don’t mean to imply that films are the root of all our societal troubles, but that they are a prism through which we can better understand the motivations of others. We are natural storytellers, with the reflexive tendency to frame the events of our lives as a narrative, drawing from movies and books when we do so. Supposing that every person is the protagonist of their biography, we would have an easier time making sense of their actions, not by questioning their intelligence or moral fiber, but by asking ourselves what score was playing in their heads at the time.

I reviewed the devastating images of that day, which has rightfully been called one of the greatest upsets to American democracy since the civil war. I watched the unmitigated destruction, the mass frenzy and the blind violence of the enraged horde. Then I studied the individuals of whom it consisted: the people who broke doors and windows, who paraded confederate flags across the halls of congress and who assaulted police officers with bare fists and flagpoles. What did they see? Fueled by the conviction that no one is beyond sympathy and that the common ground shared by almost any two people is greater than their differences, I asked myself what they must have thought as they ambushed the building? What internal narrative was running through their minds as they spread terror through the hearts of an entire nation? Could they too, recognize themselves as rioters wreaking havoc upon one of the United States’ most sacred institutions, or in the throes of adrenaline was their view perhaps colored by one of Luke Skywalker, destroying the Deathstar?

About the Author
Micha Warchaizer Efron was recently discharged from the army, where he served as an infantry soldier in the Nahal Brigade.
Related Topics
Related Posts
Comments