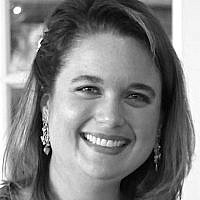 The Blogs
Susan L.M. Goldberg
Apply for a Blog
Please note that the posts on The Blogs are contributed by third parties. The opinions, facts and any media content in them are presented solely by the authors, and neither The Times of Israel nor its partners assume any responsibility for them. Please contact us in case of abuse. In case of abuse,
Report this post. 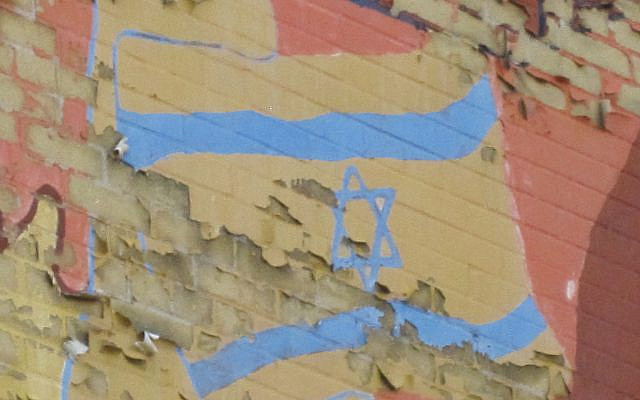 Tonight I’m talking with an instructor about enrolling my Jewish American son in Hebrew lessons. Not Hebrew school lessons and not the kind of Hebrew lessons that stop at “Tav makes the t-t-t sound like in toot!” I mean real conversational Hebrew lessons with the goal of teaching him how to both speak and read a modern, living language, something I still struggle with having only ever learned Hebrew-via-American-phonics. My linguistic disconnect rendered both the Biblical and the living language of my people a mystery to me that I was largely content not to solve. That is, until we visited my husband’s family in Israel and I found my inability to read and speak the native language deafening. All my life I considered myself a Zionist and yet there in the heart of my ancestral homeland I felt like a complete foreigner. I couldn’t be a responsible Jewish mother if I allowed my sons to grow up feeling the same way.

What told me it was time to move forward with our family’s Hebrew language immersion was a line I read in a recent demographic study on the future of American Judaism in Tablet Magazine: “Over the past 72 years Israel has reemerged as the world’s largest and most consequential Jewish community.” Read a little further and the reality for parents of young Jewish children in the diaspora becomes crystal clear: Not only do the majority of Jewish children now live in Israel, “…by 2030 Israel could become, for the first time since early antiquity, the home to a majority of all Jews.”

Israel, not the synagogue, not the JCC, not Jewish camp, is the arbiter of our children’s identity as Jews. The results of the latest Pew Survey on Jewish American life only serve to further this point. They confirm earlier-reported results showing the failure of liberal streams to survive the progressive politicization of tikkun olam, a politicization that carried with it a nasty anti-Zionist persuasion. So where does that leave Zionist families like mine who aren’t Orthodox, but long for a Jewish connection that goes deeper than “Shin stands for ‘sh’ as in ‘sh-sh-shoe’?”

Even more to the point, how do I take my sons, born to an Israeli father, to a synagogue that teaches them that black lives matter but Israeli lives held hostage by Hamas rockets do not? If demographics aren’t enough to convince you, just read the reality checks from progressive Jews on Twitter, subscribe to Bari Weiss’s Substack, or check out this Tablet Magazine piece by Odd Mom Out creator and star Jill Kargman who can’t believe she’s the only Leftist who can agree that gays have rights and Hamas is evil in the same breath. If you aren’t attending an Orthodox synagogue, chances are you’re being exposed to some level of anti-Israel prejudice in your Jewish engagement.

Progressives, including progressive Jews raised in Judaism’s liberal streams, have been actively working to purge Zionists from The Party since the rise of the Bernie Bros in 2016. The return of the Democrats to power in D.C. along with this latest Mid-East conflagration has only served to put the mic that Trump dropped back into their seditious little hands. The rise of The Squad of powerful anti-Semitic voices in Congress impacts liberal Jewish life in a number of ways ranging from nasty comments on social media, to physical attacks on both “visible” and secular Jewish Americans, to professional relationships lost to political beliefs. And because the politics of progressivism have become the theology du jour of much of liberal Judaism, they impact the pulpit as well. A letter signed by over 90 rabbinical students from Conservative, Reform, Reconstructionist and other liberal Jewish streams drew connections between BLM and the Israel-Palestinian conflict and demanded that charitable funds earmarked for Israel be scrutinized in the name of “human rights”.

Along with their increasingly progressive political bent, the demographics indicate that liberal Rabbis aren’t being trained to keep up with the needs of current and future generations. As Caroline Glick noted in her recent Tikvah Fund lecture entitled, “Does American Jewry Have a Strategy?” Jewish identity stands on three legs of belief: the people of Israel, the land of Israel, and the Torah. If a growing number of young liberal rabbis wish to knock the land of Israel and the Jews living in it out from underneath their expansive tent, they have only the Torah and their declining population to rest on for job security. It’s only too bad that, as Rabbi John Moscowitz concisely explained in Mosaic Magazine, “Identity formation and the cultivation of a religious worldview is seen not as mutually reinforcing, but as incongruous,” in liberal Jewish streams. Perhaps that is why the junior rabbi of our previous synagogue who offered classes on whether or not blood-sucking werewolves and vampires could be Jewish responded to my idea of a Nerf-reenactment of the retaking of the Kotel with, “I’ve been told not to talk about Israel in militaristic terms since that can offend some people.”

Programming and pastoral care have become the domain of the liberal Jewish rabbi. In real world terms that translates into prioritizing the social hall over the sanctuary, and life cycle events over Torah study. Liberal suburban synagogues have, in effect, become micro Jewish community centers better known for Purim Carnival blowouts and fundraiser galas than intellectual inquiry and spiritual fulfillment. This stands in stark contrast to the kind of liberal Judaism that is thriving through entrepreneurial projects like Romemu in New York, Ikar in Los Angeles, and the Adventure Rabbi in Colorado. Not unlike Rabbi Lord Jonathan Sacks’ (z”l) “dignity of difference” open Orthodoxy, the new liberal Judaism is one that meets the young Jewish need for spiritual fulfillment on an individual level in a communal setting defined by egalitarian prayer and Torah study.

This isn’t an impossible model to replicate in the suburbs where most Gen-X and Millennial Jews are raising their families. In fact, it’s becoming necessary to start thinking outside the box for synagogue survival. The future of American Judaism isn’t going to be secured through meaningless trope-by-memorization bar and bat mitzvahs and gala fundraisers replete with name plaques on synagogue walls. It isn’t going to be secured by anti-Zionist progressive politicking, either. Writing on the seismic shift currently happening in Jewish American culture, Liel Liebowitz explained it best. “Liberal and non-orthodox circles,” or “Team A” as he defines them, will continue to experience a decline in membership until they dissolve altogether while,

The challenge for the other side [Team B] is in whether it will shift to accommodate the refugees from the “right” of Reform and Conservative Judaism, people seeking both Jewishness and modernity who want spiritual and religious depth without bigotry or exclusion. If they’re dim, the leaders of team B will treat these newcomers with suspicion, subjecting them to all manner of impossible and undignified purity tests. If they’re smart, they’ll welcome them with open arms, realizing the immense potential for Jewish revival at hand.

Either Orthodox synagogues will rethink their minhag, or liberal synagogues will reassess their relationship with progressivism. It’s more likely that something new will be birthed somewhere in the middle, an egalitarian Judaism that embraces Israel as our ancestral homeland and Hebrew as a living language spoken by a living people. It will be a Judaism that also prioritizes the value of engaging with Torah and Tanakh instead of looking to create a cut-and-paste Jewish identity out of diaspora popular culture.

The challenging bottom line is that for American Judaism to survive, American Jews need to stop seeing themselves in terms of religion and once again take up the mantle of peoplehood. We can no longer question why anti-Semites seek to associate attacks on diaspora Jews with the Israel-Palestinian conflict; we no longer have the luxury of divorcing ourselves from a land battle thousands of miles away. Despite facing endless wars our Israeli cousins are thriving while we are disappearing. We can’t afford to remain a mere religion any longer. I know what I am suggesting is a radical culture change, but given our demographic realities, isn’t it about time?

About the Author
Susan L.M. Goldberg is a mother, writer and passionate Zionist with a Master’s degree in media studies. With her Israeli-American husband she stands at the crossroads of Israeli and Jewish American culture, politics and religious practice.
Related Topics
Related Posts
Comments