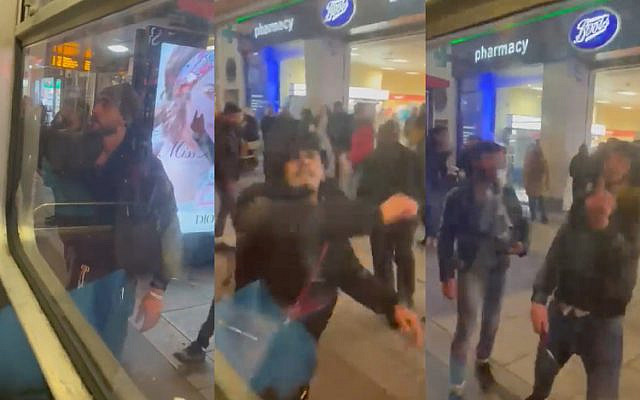 Frames from video of men attempting to smash the windows of an open-top bus carrying Jewish teens celebrating Hanukkah in London. They also spat on the bus, swore at the passengers and yelled verbal threats and abuse. Nov. 29, 2021

Unless your only sources for information are the Guardian and Novaramedia, by now you know that a group of Jewish teens were assaulted on Monday, November 29, in London.

You also know that the assailants were non-white. According to the BBC, this is not a minor detail. The news was indeed packaged with an extra unverified bit, in other words, with a lie. The reporter made up that anti-Muslim slurs were shouted by the terrified teens and/or by the adults.

It was a lie, as the UK Board of Deputies pointed out. Apologies have been demanded. The BBC has answered clumsily: the initially reported Islamophobic furore has been downsized to one single slogan on its website. Such a slogan is nowhere to be heard, but the public loves to hear how racist Jews are and antisemitism is deserved. Why bother telling the truth?

I call it the legend of the worldwide Zionist Islamophobic conspiracy. You find it in its undiluted form in public statements such as Ms Zahra Biloo, Executive director of the Council American Islamic Relations, the largest Muslim organisation of America.

The weekend before the London assault, the American politician went on a rant against (hold on, it’s a long list): “Zionist synagogues”, the Anti Defamation League, the student organisation Hillel, the Jewish Federations and other Jewish organisations. They were all responsible for spreading Islamophobia around the USA. The hateful and conspiratorial public speech was given at a national conference entitled, guess what: “On the Road to Free Palestine”.

Zionism is not the movement for Jewish self-determination but just another name for the perpetual anti-Muslim hate in such a perverse worldview.

The hardcore version of the legend of the worldwide anti-Muslim Zionist conspiracy goes this way. Racism against Muslims and Arabs is an essential element of Zionism and Jewish supremacy; wherever Muslims suffer, Jews benefits (“see Palestine, for example!”). Therefore, part of such a strategy is to encourage and spread Islamophobia all over the Western World.

But then there is also a softcore version of the same legend. It is evoked through references to a “problem of Islamophobia in the Jewish community”, which Far Left activists on social media are obsessed about. Don’t you dare to ask for sources; you will be suddenly labelled -in pure conspiratorial fashion-, as a complicit and a racist yourself.

The fact is that Jews are human beings (big surprise, I know). They may have the same prejudices as their non-Jewish fellow citizens, including Islamophobia. Based on my personal experience, I would suggest that the less popular minority among us Jews are not the Arabs/Muslims but rather the Travellers and the Roma. Which I don’t believe are so popular among the Muslims either.

To my knowledge, there has never been any sociological research on this much talked anti-Arab racism among the British Jewish population. The “alarming extension of Islamophobia in the Jewish community” is an unsubstantiated rumour.

AntiZionist activists such as David Miller talk about the Jewish institutions that spread Islamophobia. They lie. Jewish activists (sadly, it happens) refer to the same legend in its hardcore or softcore version. They lie. And the do lashon haraa.

Jewish teens have been assaulted. The immediate reactions should be compassion for them and indignation towards the attackers, regardless of their ethnicity or skin colour.

Instead, reporters (well fed by a light version of a conspiracy theory) took time to insinuate that the kids deserved what they got. And they could do it because the readers have been fed the legend that there certainly is some Zionist Islamophobe among these kids’ friends, teachers, and family.

There’s a name for this evidence-free activism on social media: trolling. Now we begin to see the damage they cause in real life.