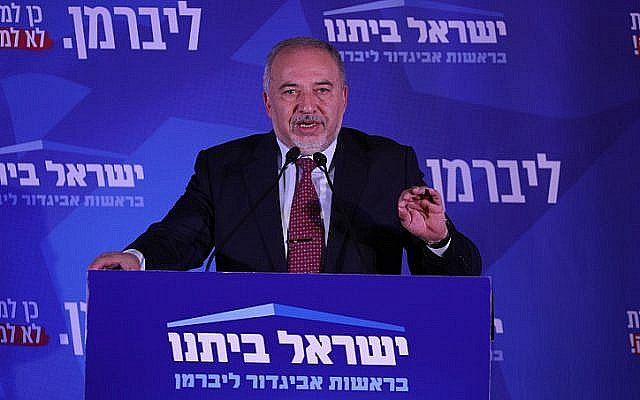 There was much rejoicing on the left when Avigdor Liberman said he would support a rumored bill banning criminal defendants from becoming prime minister. With the help of the Joint Arab List it could pass, and some called it “check-mate” against Benjamin Netanyahu, whose bribery trial is to begin within weeks.

Be careful when playing chess. Your new Soviet-born friend may be thinking several moves ahead. Aside from the procedural, political and legal challenges the bill will face, the law might not help Benny Gantz. It could rather end up paving the way for another Likud figure instead.

The idea of the bill became public on Thursday as final results gave the Netanyahu bloc 58 seats only, three shy of a majority and crushing the Likud victory narrative that set in on election night. But Gantz’s 62 backers are not cohesive: Liberman’s 7 won’t sit with the Arabs’ 15, and without either he can be outvoted.

When Liberman let it be known he would cooperate with the Arabs on a law blocking Netanyahu, it in theory suggested willingness to collaborate in a coalition as well. But that begs the question: Why not jump to that cleaner outcome instead of fiddling around with messy legislation?

Sure, it’s absurd that a loophole currently allows defendants to be PMs and vice versa, but the fact is that almost half the country voted for Netanyahu knowing that would be the case. Rest assured that Bibi (who in a reverse scenario would pass the bill in a second) will whip them into a frenzy that could turn violent. He will use arguments that seem reasonable involving “retroactivity,” and falsely but effectively claim Likud’s status as the slightly larger party with 36 seats (which in Israel’s system means little) gives him moral standing.

On the opposition side plenty of people will play into his hands by considering these arguments; the left is the timid master of self-doubt and hesitation. And it is not inconceivable that the Supreme Court will strike the law down.

I think the proposed bill is worthy, but if that is the thing that ends Netanyahu’s tenure it will be forever tainted as political and could be ultimately reversed. Better to pass it after Netanyahu is gone, as a much-needed correction.

After all, if the intention of the bill is to get Netanyahu out of the way, there is a faster way to do it: with the Arabs and Liberman, plus Labour’s 7 seats and his own Blue and White’s 33, Gantz can be installed. All it really takes — just as with the bill — is for Liberman and the Arabs to agree. The elegant solution appears to be for the Arabs to back the government without formally joining it – as occurred in 1992 under Yitzhak Rabin. Then they can start passing laws (including term limits, secular reforms and many other fine things).

What, then, does the law serve now? Think several steps ahead, like Liberman.

Relatively late in life Liberman has decided to make a brand of his word being his bond. In  September’s second election campaign he said he would support only a unity government, and he stuck to that line fanatically; when such a government became impossible he refused to accept an Arab-backed Gantz coalition, leading to the third election last Monday. So let us look at what he has recently been saying:

One can hope he will violate the last two items — but I wouldn’t bet on it.
If the law passes it will become clear that Netanyahu cannot for now serve. His trial would begin on March 17, just as the new Knesset is being sworn in. Likud’s three-dozen “parliamentarians” would be looking at long years in opposition.

Liberman could then make clear to them that if Likud replaces Netanyahu he would support whoever the new leader is for prime minister of a unity government. That could be for a full term; it could be in rotation with Gantz (or with Liberman?). Other details will arise – who goes first? what’s the regicide mechanism? – but you certainly get the picture.

Liberman has no problem with Likud’s ultranationalism. He just hates the right’s attachment to the religious parties, and that is easy to understand given the extreme secularity of his Russian immigrant base. This would be a beautiful way to prise Likud loose from that alliance.

It could work. Israel could end up with Nir Barkat, Yisrael Katz, Gilad Erdan or some other Likud genius as prime minister. (Gideon Saar seems to have burned bridges by challenging Netanyahu in the December Likud primary, and Yuli Edelstein has some issues as well, though they may not be fatal.)

Gantz will have a hard time resisting. Blue and White has unwisely laundered Likud of its many sins by focusing almost entirely on Netanyahu – as if the only thing wrong with the party that is turning Israel into an undemocratic binational theocracy is a few charges handed down by the attorney general. Indeed, its leaders have made clear they yearn for a unity government – just not with Bibi. Gantz’s case to lead it is now weakened by the fact that unlike in the fall his is not the largest individual party. And it is Liberman who will call the shots.

The gambit could also not work. Expect Netanyahu to insist on remaining as Likud leader. He will argue that it is in Likud’s interest to call everyone’s bluff, and see if they dare set up a government that will collapse the next time Hamas fires a rocket from Gaza and the Arabs prevent Gantz from reacting. He will argue that the government will be a joke that will last a year at most, and after that Likud will storm back stronger than ever. Once it does, he will say, they can reverse the anti-Bibi law and reinstall him on his throne.

He may have a point. But also maybe not. Leadership sometimes requires a paradigm-shattering leap of faith, and a leader can change behaviors and drive a new narrative, new assumptions, new understandings. It also helps to satisfy your base. If Gantz formed a government backed by the Arabs, it is true that right-wingers would howl, and a few soft-right Blue and White voters would scowl. But the majority of the anti-Bibi majority will be ecstatic at seeing this reckless agitator finally, mercifully gone, for any period – a year, a month, a week or a minute.

Much depends, as it has for years, on Netanyahu’s superhuman determination to cling to power. I wouldn’t count him out. Netanyahu is Israel’s real chess master.