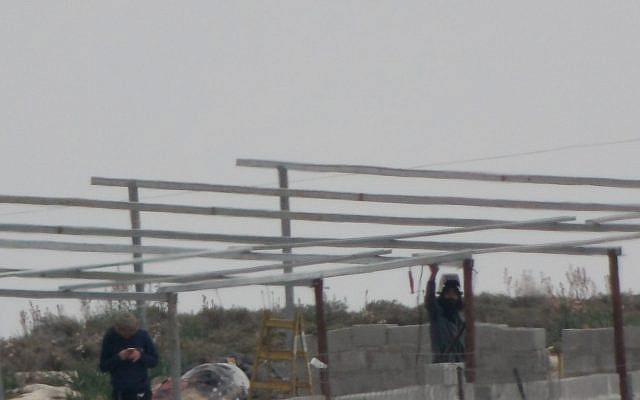 Settlers building a permenant structure at the illegal even according to Israel Ma'aleh Ahuviah, days after the army 'evacuated' them, and in the full sight of the army. (courtesy)

Leaders are very often either demonized, or can do no wrong.  When I was in rabbinical school one rabbi told us that there is an incredible amount of transference going on between congregants, and a rabbi standing in front of the congregation with the ark holding the Torah and the eternal light behind him/her. He advised us not to take it too badly when some seem to be angry with us for no reason, and not to let it get to our heads if some practically worship us. They may be working out their relationships with their parents.

We see how leaders are related to in our Torah portion, Ki Tisa. I believe we are taught a lesson of what can happen when we choose pragmatism over a principled stand.

Many of the classic commentators do everything in their power to absolve Aaron of responsibility for his role in creating the golden calf.  Rashi says that when Aaron declares, “This is your god  O Israel, who brought you out of the land of Egypt!” (Exodus 32:4), it was the only the “erev rav,” the non-Jews who joined the exodus, who were responsible, “It does not state that they said “this is our god, O Israel”; hence we may learn that it was the mixed multitude which came up from Egypt that gathered themselves together against Aaron, and it was they who made it and afterwards led Israel astray after it “ (based on Midrash Tanchuma, Ki Tisa 19). This explanation conveniently forgets “O Israel.” He also writes that Aaron was thinking, ‘better me than them.”

Even Rabbi Shimshon Rafael Hirsch goes to great length to defend Aaron. It seems to me that when Moses demands to know how Aaron could have allowed this, he passes the buck:

“Moses said to Aaron, “What did this people do to you that you have brought such great sin upon them?” Aaron said, “Let not my lord be enraged. You know that this people is bent on evil. They said to me, ‘Make us a god to lead us; for that fellow Moses—the man who brought us from the land of Egypt—we do not know what has happened to him.’ So I said to them, ‘Whoever has gold, take it off!’ They gave it to me and I hurled it into the fire and out came this calf!” (32:21-24).

Hirsch says that Aaron doesn’t go into everything the people did, and that arguing that the people are bent on evil is a sort of “Don’t blame them. You know they can’t help it.”

Ramban is a bit more equivocal. He notes the passivity defense of Aaron, but also says that he is trying to downplay what the people did:

“  Aaron is saying: ‘They proceeded along the path of evil. They told me to make them a guide in the place of my lord until he returns to me, for perhaps he will return, and then they gave me the gold and I cast it into the fire and behold there came out this calf for them, for they had an evil intention as to the gold, [and wanted] to worship it and sacrifice to it.’ But because Aaron did not want to speak at length about their corruption, he spoke briefly and said, and there came out this calf, meaning, ‘there came out for them this evil matter that my lord sees.’” (Commentary to 32:22)

Ramban also suggests that “Elohim” here is not “god,” but “leader.” Sometimes in the Torah this word does appear as “leader” or “judge.” The original idea was a replacement for Moses, but the people then descended into idolatry

It is true that Aaron does everything he can to stall, and the Midrash also says that Miram’s son, Khur, was killed when he tried to stop the mob that gathered around them, and demanded a new god.  It is also true that it doesn’t seem that Aaron was punished, which may indicate that Moses and God didn’t blame him.  However,  a verse earlier Ramban makes it clear that a leader’s responsibility is to stand for what is right, even at the risk of his/her life:

WHAT DID THIS PEOPLE UNTO THEE, THAT THOU HAST BROUGHT SO GREAT A SIN UPON THEM? “How many pains did you endure, and how much suffering did they inflict on you, before you brought this sin upon them?” This is Rashi’s language. But it does not appear to me to be correct. For this transgression [of idolatry] is of the kind for which one must sacrifice one’s life and submit to death rather than transgress it [and from Rashi’s words it would appear that if Aaron had suffered much it was permissible for him to make it]. Perhaps Moses told him so in order to magnify his guilt.

The correct interpretation appears to me to be that this is like the verse, What have I done? what is mine iniquity? and what is my sin before thy father, that he seeketh my life? Moses is thus saying: “What hatred did you have for this people, that you have [almost] brought about their destruction and annihilation?” Moses told him this because Aaron had served them in the function of one who reproves and atones for them, and he should have had compassion and mercy on them [and should have made them desist from their course of conduct]; thus the meaning is: “You conducted yourself towards them as an enemy who desires to see their calamity, when they had neither sinned nor transgressed against you.” (Commentary to 32:21)

Aaron is contrasted with Moses in that he was a peacemaker. Moses argues with God to defend the people here and elsewhere, but also reproaches them. In our Torah portion Moses orders that those who worshiped the golden calf be killed.  Commentators note that is why we are told that “all” the people mourned Aaron’s death, but the word “all” is missing regarding the mourning for Moses. And then of course there is Freud, who claims that the people also murdered Moses.

Giving Aaron the benefit of the doubt, he chooses the path of trying to buy time until Moses returns. He thinks that the people will balk at giving up gold. Maybe he believes that they are only trying to replace Moses, and not God. But, he does not take the path of Khur, and directly say that what the people wish to do is forbidden, he will not lend his hand to it, and will try to prevent it.  Aaron’s approach does not work, and the people are allowed to create a terrible sin.

Today our leaders also often choose the path of least resistance, preferring industrial quiet to principled conflict.  Even among human rights activists, there is sometimes a debate between a principled position that negotiating with violent settlers to try to get them to throw some crumbs to Palestinians is like negotiating with the thief in your home, and those who say that pragmatically the Palestinians will be worse off if they don’t compromise.  To this day, Benny Begin believes that those of us who opposed his compromise plan for the Bedouin in the Negev colluded with the right wing to the detriment of the Bedouin.  I argued that our role was to stake out a principled position. Politicians don’t need us to fashion compromises. Had we moved to the center, the center would also have then moved further to the right. When fighting on behalf of Israelis living in poverty, we are often faced with the dilemma of whether to support, remain silent or continue to be critical of leaders who are offering insufficient improvements.

These are difficult decisions. However, just as Aaron discovers, the pragmatic decision often turns out to be an illusion.  Recently, some Israelis tried to negotiate in the name of Palestinian shepherds without their consent. The deal was to be that, if the shepherds respected red lines around Omer Atidya’s illegal even according to Israel outpost, the settlers would cease to harass them further away.  Just this last Friday, one of the shepherds was attacked and injured, as a settler ATV again plowed into their sheep, injuring several.  Other settlers then showed up to threaten retaliation if the victim complained to the police.  So much for agreements made behind the backs of shepherds. And, I have seen so  many cases where giving into threats simply leads to more threats.

Last week I already wrote about how on the very day that the illegal even according to Israel Ma’aleh Ahuviah” outpost was “evacuate”, settlers began rebuilding their base for terror, violence, the destruction of vineyards and olive groves, vandalism, theft and their flock eating what Palestinians plant on their registered lands. I won’t name the names of those who assured me that this time it wouldn’t happen.

Emboldened by the obvious impotence or lack of interest by the army and those responsible for the army, Ma’aleh Ahuviah’s settlers are going even further. They are now building a permanent structure!  Every day army vehicles pass by on their way to a local base.  Even if we don’t want to conclude that the settlers are actually carrying out Israeli policy of taking over Palestinian lands, the passive allowing the settlers to rebuild has not satisfied them. It has only whetted their appetite.  I was also told by several police officers on the day Ma’aleh Ahuvia was first set up in December 2020 that the local brigade commander had allowed it, perhaps to let the friends of Ahuvia blow off some steam… We see how well that has worked.

I won’t categorically state that appeasement never works.  The entire world waits with bated breath to see whether either Ukraine’s conciliatory gestures towards Russia, or threats of consequences, prevent an invasion. However, our Torah portion and subsequent history teach us that appeasement often fails, or worse.

May we be imbued with the peace making characteristics of Aaron, without giving up our ability and willingness to stand uncompromising on principle when necessary.