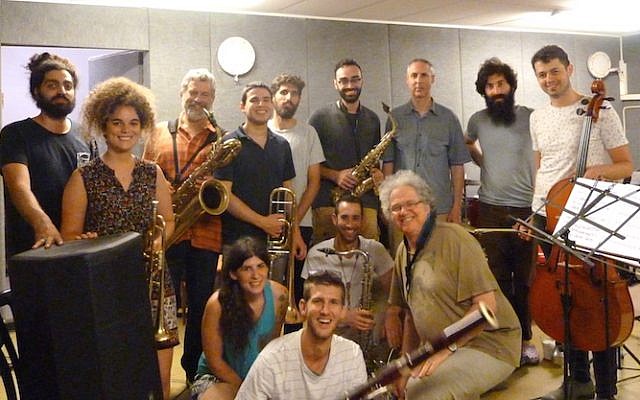 The Holistic Ensemble: The Lab Orchestra

I am overwhelmed with the news.  It happens from time to time.  Yes, for the next days I will forgo all elections predictions, accusations, and rumors.  I will imagine myself in a luscious forest somewhere in Oregon, or vacationing on a secluded island in Greece.  Most of all, I will return to my music composition.  This requires the utmost of concentration, necessitating quiet and calm.  There are so many projects to start.  One of them, an evening length work with poetry and music, a collaboration with Ed Codish, is perhaps the most intriguing.  Another is a new collaboration with conductor/composer Matan Daskal (“Castle in Time Orchestra”). The third is a an extended work for my own ‘Lab Orchestra” which I founded and conduct; I call it a “holistic ensemble”,  a kind of community of like-minded musical souls.

In many of my previous posts, I have a said that such immersion might be a “cop-out”.  Will I be like the horse with the blinders, or as my late teacher/friend Bill Dixon used to call it: “apple pie vision”.  What would happen if everyone had apple pie vision?  We’d probably die as a civilization.  So how can I give myself this luxury of stepping away to do my “work”?  On the other hand, will this society “let me”.  In To Jerusalem and Back, Saul Bellow alludes to this; he quotes A. B. Yehoshua’s realization that it is difficult, even impossible, for an artist to achieve artistic solitude in Israel. The artist is  constantly “called to solidarity” from newscast to newscast.   (See the author’s previous blog at Why do you live the life of a hermit? )

Furthermore, does the work have value to this society?  As Rilke said in “Letters to a Young Poet”, one should only create if one absolutely NEEDS to:

“No one can advise or help you – no one. There is only one thing you should do. Go into yourself. Find out the reason that commands you to write; see whether it has spread its roots into the very depths of your heart; confess to yourself whether you would have to die if you were forbidden to write. This most of all: ask yourself in the most silent hour of your night: must I write? Dig into yourself for a deep answer. And if this answer rings out in assent, if you meet this solemn question with a strong, simple “I must”, then build your life in accordance with this necessity; your whole life, even into its humblest and most indifferent hour, must become a sign and witness to this impulse. Then come close to Nature. Then, as if no one had ever tried before, try to say what you see and feel and love and lose.” (Rainer Maria Rilke, Letters to a Young Poet, Letter #1)

So what about one’s need to turn the computer on and see twelve news sites to approximate some near truths about world’s situation?  The answer: both “needs” really cannot co-exist a various seminal points of one’s creative life.  It is like trying to mix vinegar and oil.

My way of creating is doubly challenging, as I know the players I am writing for. This way of composing takes additional skills, sensitivities and concentration.  The method is not new. It was pioneered by many of the earlier Afro-American musicians, especially the composer Duke Ellington.  Ellington always composed with each of his musicians in mind: their sound, their inflection, their range, their way of doing things.  He didn’t write for alto saxophone, but rather wrote for Johnny Hodges (whose musical voice was unique and epic).  The same with Ben Webster, whose sound was breathy, plaintive, and expressive in an inexplicable way.  Also members of the Ellington band could always turn to “Duke” and say, “Hey Duke, how about if I play this instead?”.  If he liked it, they did it (and it then became part of the oral score).  Here’s an example of that style: Ellington’s extended piece entitled Tone Parallel to Harlem, where Duke imagines the various windows/rooms of a Harlem tenement, and the sounds and musical voices emerging from them:

So in the music I do, whose basis I inherited from teachers who believed in the sound of collective “individuals”, I imagine each and every player playing, not an anonymous flute, trumpet or cello sound.  I hear Tal Abraham (trumpet), Tom Klein (cello), and even myself on the alto flute.  Likewise for double bass or drums (I hear Or Siday and Shay Hazan; or I hear Haim Peskoff, today on brushes).  I also love to dialogue between two drummers, creating a piece spontaneously with my physical gestures, as in this video:

Building a working ensemble is like creating any small community.  Not only do members learn and play the music, but they also share their lives and feelings. Such a “holistic ensemble” can also become an incredible vehicle for teaching youth, especially youth at risk.  The key is to focus on the individual person and their needs (as Martin Buber stated in his essay, The Education of Character).  Instilling feelings of belonging is so important in such work, as well as creating collective and individual successes through the music making.  The realization that not only each player is unique, but that also the sound of the ensemble, the sound of the “whole” (and the sum of the parts) is greater than any one of the individual parts.  That is to say, where much of pop music revolves around a lead singer/personality, the holistic ensemble is truly a cooperative community of shared leadership.

Such is the Black American musical tradition that I was privileged to inherit from my teachers and hope that my former students will pass it on to the future generation.   Meanwhile, please excuse me. I must now I retreat to my daily composing and after then enter Shabbat, where the imagination still bubbles in all its blazing glory!