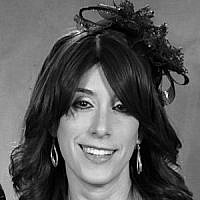 The Blogs
Sara Bonchek
Apply for a Blog
Advertisement
Please note that the posts on The Blogs are contributed by third parties. The opinions, facts and any media content in them are presented solely by the authors, and neither The Times of Israel nor its partners assume any responsibility for them. Please contact us in case of abuse. In case of abuse,
Report this post.

Israeli Haredi women are 30% more likely to die of breast cancer than their secular counterparts (although they are 70% less likely to get the disease in the first place).

The reason for this, says women’s rights activist Shoshanna Keats Jaskoll, is because Haredi society neglects the needs of Haredi women and prioritizes the value of modesty over health care: “In Haredi society, speaking of breasts and other female body parts is immodest. So they aren’t spoken about.” Thus Haredi women are less aware of cancer screening’s life-saving role and fewer women comply with mammography recommendations, leading to late-stage breast cancer diagnosis and less chance of recovery.

But the reality on the ground suggests differently.

It’s difficult to accept the claim that Haredim refuse to discuss women’s body parts on grounds of modesty, when every married Haredi woman (and man) is well versed in the laws of family purity, the laws that deal with menstruation and sexual relations, taught to them by a teacher and reviewed annually, often in a group setting. Discussion of intimate topics isn’t avoided; it’s just done discreetly and delicately, often euphemistically, such as referring to the vagina as “the place,” sexual relations as “something done in private” and breast cancer as “women’s cancer.”

Even 17 years ago, leading Haredi rabbis published a ruling that it is a religious obligation for women over 50 to have a biannual mammography. A 2013 study found that 75% of Haredi women were complying with national recommendations for mammography screening, and that the gap that had existed at the beginning of the millennium between Haredi and secular women’s compliance had narrowed significantly.

In Israel, the life expectancy trend is that women outlive men. Haredi women are no exception to this. A 2013 survey found that in the almost exclusively Haredi city of Bnei Brak, the average life span for women was 83.1 years, while men’s was 80.1. The claim that Haredi women rank 10th and men 2nd is based on a misinterpretation of this survey; relative to women in other large cities, women in Bnei Brak ranked 8th out of 13, coming ahead of the secular bastion of Tel Aviv, while men were at 2nd place out of 12 relative to men in other larger cities. In fact, of all large Israeli cities, the discrepancy between the life spans of men and women was smallest in Bnei Brak.

Having said that, the fact that relative to women in other cities, Bnei Brak women do die slightly earlier means that health promotion among Haredi women deserves attention.

But the lens through which this is done needs to be changed.

The issue is not one of modesty restrictions, but of other factors pertinent to the Haredi community.

There is a belief in the Haredi community that engaging preventive health care borders on “playing G-d.” An Israeli research study found that when it comes to dealing with screening for breast cancer, there was “confusion and ambiguity when the women tried to determine whether undergoing the recommended tests represented taking responsibility for one’s health, rather than overdoing it and thus a sign of lesser faith…”

It was this very issue Rabbi Moshe Sternbuch, the vice president of the Eidah Hacharedit, was addressing when he issued a letter stating that, “You should not rely on the biblical verse that God will protect, but rather be vigilant about check-ups,” printed in the Yated Neeman in April of 2016. The best way to combat this misconstrued perception is through Rabbinical directives which counter it.

“Women in general put themselves at the end of the totem pole,” says Sara Siemiatycki and as a result, don’t make their health care a priority. Women, from the earliest age, need to be taught that while self-sacrifice is an admirable virtue, the more developed one’s self is, the more one has to offer, and thus taking good care of one’s self is essential for society’s well being.

Many Haredi women are working mothers of large families, which means time constraints are a serious issue. Research studies have shown that Haredi women are often overweight and do not engage in much physical activity. Eating well and exercising are time-consuming practices; it is far easier to reach for a bag of Bamba or spread a piece of bread with chocolate spread — ubiquitous snacks Israeli Haredi children take with them to school — than to chop a salad or slice some fruit. Better education on the benefits of healthy eating and regular exercise, by way of promotional content published in Haredi print media, would encourage more women to make this a priority in their busy lives.

Healthy eating also comes with a high financial price. Whole-grain bread, for example, costs an average of 12-13 NIS a loaf, while white bread can be purchased for as little as four shekel a loaf. Subsidizing healthy food and taxing white flour, sugar and snack foods would go a long way to improving the health of lower-income members of Israeli society.

Yes, there’s work to do when it comes to improving Haredi women’s health.

But even though we’re talking about Haredim, the outlook isn’t black at all.

About the Author
Originally from Australia, Sara Bonchek now lives in Beit Shemesh with her husband and five children, where she writes, edits and keeps house.
Related Topics
Related Posts
Comments