Raising the electoral threshold to 3.25% was a success. Many of the concerns raised against it have been mitigated. Is it time to raise it to 5%? 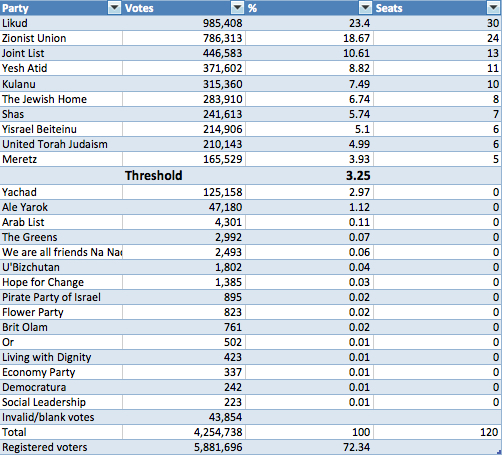 Results of the 2015 Knesset Election

In a story buried in the results of Israel’s recent election, Dr. Ofer Kenig, who leads the Forum for Political Reform in Israel with the Israel Democracy Institute (IDI), was surprised that raising the electoral threshold led to fewer “wasted votes” and increased numbers for Israel’s larger parties. In fact, there were 80% fewer votes cast for parties that had no chance of clearing the threshold.

With the electoral threshold raised by 1.25% from the previous election, observers like Dr. Kenig expected to see more wasted votes not substantially fewer. In the 2013 election alone, 268,000 votes were cast for parties that did not clear the threshold to earn seats in the Knesset; 7% of the total number of votes cast. In this year’s election the total number of wasted votes was only 50,000 about 1% of the over 4.2 million votes cast; 72% of the eligible electorate.

The Yachad (Together) Party received just over 125,000 votes which had them .25% (about 13,000 votes) below the threshold. These votes are not considered “wasted” per se, because the party came very close to passing the threshold. Is it time to consider a higher threshold? Would raising the threshold higher hold still greater benefits for Israeli voters?

When I volunteered in the 18th Knesset there was quite a lot of buzz about electoral reform. The goal of the discussion was to encourage larger political parties and thus more stable future coalitions. Raising the electoral threshold was one primary avenue for affecting this reform. The argument was that a higher threshold would discourage votes for parties that would have no chance of earning seats and redirect those votes to larger parties.

In proportional systems, the threshold is the minimum percentage of votes a party must receive in order to earn seats in the legislature. If the party fails to meet the threshold it is excluded and the votes cast for the party in question could arguably be seen as “wasted votes.” Israel has dozens of political parties, including Israel’s own version of the Pirate Party, which receive a very small number of votes at each election. In the past many Israeli voters would choose a small party with which they strongly agreed, even though that party had little chance of earning seats. It is often the case that voters might settle for a larger party with which they generally agree, albeit not completely.

When I was involved in the discussion, I noticed that the larger parties, Kadima and Likud at that time, were willing to support raising the threshold all the way to 5% over time. The 5% threshold is same used in the German System. In Germany, widely seen as a model for proportional democracy, parties must clear this high bar in order to earn seats in the Bundestag, Germany’s lower house of parliament. Germany has five parties that currently serve in the Bundestag and enjoys a more stable political situation than many multiparty proportional democracies. Smaller Israeli parties are reluctant to see any increase in the threshold, for the obvious reason that these small parties might fail to earn seats. There is a balance to be pursued between a more stable political system with larger parties and the demands of some voters for smaller parties with which they more strongly agree. 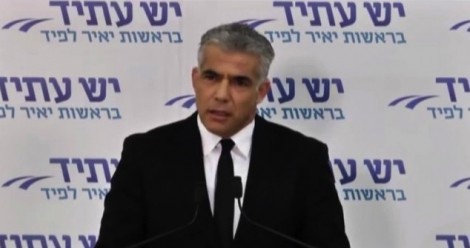 Kadima was not to earn a substantial presence in the 19th Knesset, having divided into two parties. Yesh Atid (There is a Future) Party leader Yair Lapid took up the issue, pushing for a 3.5% threshold for the next election. This was the level I had pitched, so I was naturally excited to see the reform championed. Ultimately, the coalition party members in were only willing to support a 3.25% threshold, which was close enough. Groups like the IDI, led by Dr. Kenig, have promoted the gradual increase of the threshold by increments of .5% to give parties and voters time to acclimate to the higher bar. The rapid increase of 1.25% all at once, pushed into enactment by Lapid, was quite a bit higher than they would have preferred. The shock to the system has been quite mild and seems only to have sped up the process of encouraging larger parties.

There were several concerns about raising the threshold when I discussed the matter with Knesset members back in 2010. One was that it might lead to more wasted votes, which, as we have seen turned out not to be the case. Another, was that the small Arab parties might fail to earn seats and thus deprive Israel’s Arab minority of representation. Israeli Arabs make up fully 19% of Israel’s population, including Arab Christians, Bedouins, Druze, and Arab Muslims. As it happens, neither concern materialized. The three main Arab parties formed a joint list and all together earned 13 seats in the Knesset. Given the general agreement among these parties on major issues, it is well that they should all fit into one joint list.

Yet a further concern was raised that a higher threshold might prevent new parties from arriving on the scene bringing new ideas and a fresh perspective to Israeli politics. In 2013 Yair Lapid’s Yesh Atid Party arrived on the scene as a centre-left party earning a perviously unimaginable 19 seats. While Yesh Atid fell to 11 seats in this last election, still another party arrived on the scene: Moshe Kahlon’s Kulanu (All of Us) a centre-right party earned 10 seats. Thus in two elections two centrist parties were thrust into the Knesset from nothing and not only cleared the threshold but earned a substantial number of seats. It is clear that change and refreshing new perspectives are quite possible with higher thresholds.

One might then ask if perhaps a still higher threshold would be a good idea? If the parties, blocs, and voters were able to adapt to a 3.25% threshold so easily, why not 5%? If a 5% threshold had been in place in this most recent election, Meretz and United Torah Judaism (UTJ) would not have earned seats. The other major parties would have earned more seats to their advantage.

In the next election, Yachad is not likely to be an issue, and the Haredi (ultra-orthodox) Bloc parties will likely earn more votes, meaning that both Shas and UTJ will almost certainly earn seats. As for Meretz, voters for this is a far left protest party could satisfy themselves nicely by voting for Zionist Union, which includes Labor, an equally far left party. Meretz could also push to make itself more relevant and worthy of the 5% of votes to earn seats. Thus, the voters would decide whether these parties ought to remain.

A possible compromise would be a 4.5% threshold for the next election and 5% thereafter, which would provide time for the parties and voters to adjust. If the threshold were simply raised to 5% it would likely have the same positive effects on Israeli politics: larger parties and fewer wasted votes. Parties would simply have to remain above the threshold in order to remain politically relevant, as is currently the case at 3.25%.