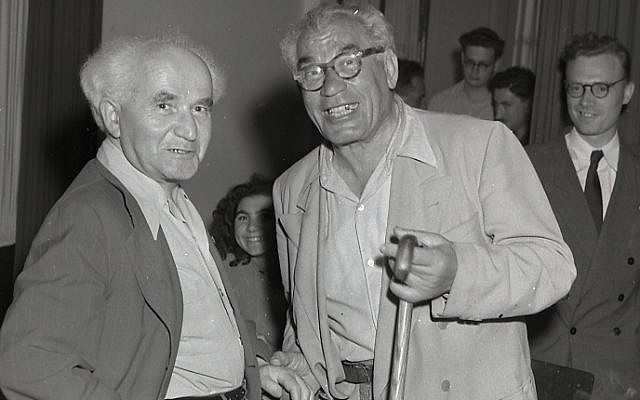 About an hour before the first meeting of Israel’s inaugural government on February 14, 1949, David Ben-Gurion entered the Yeshurun Synagogue in Jerusalem. He was there because he had promised a prominent religious Zionist rabbi that he would be.

It was the first time the Jewish state’s secular founding father had been in a synagogue in the Land of Israel during prayers. He’d already lived in the Land for some 40 years.

This uncharacteristic and incongruous event was perhaps a portent of things to come in Israel’s strange, and — in some ways — trendsetting first national government.

Voting for something else

The elections for Israel’s First Knesset in 1949 boasted the country’s highest-ever voter turnout (some 87 percent of eligible voters).

Yet the roughly 440,000 people who voted were not voting for the Knesset at all!

They were voting for the “Constituent Assembly,” a body intended to create a constitution for the young Jewish state, not necessarily govern it. 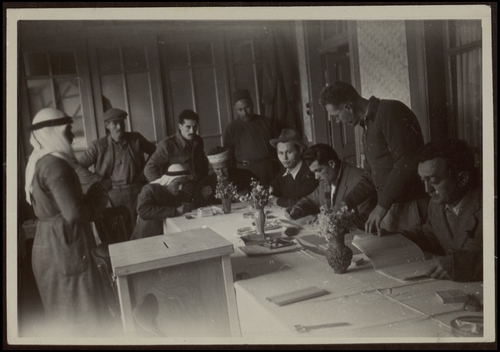 Polling station in Abu Gosh during the Constituent Assembly elections, 1949 (Keren Hayesod. From the Pritzker Family National Photography Collection at the National Library of Israel)

Two days after their first meeting, a proposal led by David Ben-Gurion was passed and the “Constituent Assembly” became known as the “Knesset.”

To this day, Israel does not have a constitution.

The two biggest winners in the election, Ben-Gurion’s Mapai Party and Meir Yaari’s Mapam Party, were both left-wing and secular, yet Ben-Gurion refused to include Mapam in his coalition, preferring the inclusion of four smaller parties presenting a rather diverse and seemingly bizarre group of Haredim, Religious Zionists, Sephardic Jews, liberal secularists and Arabs…

Ben-Gurion, though, of course, had his reasons for choosing these partners. It was important to him that parties representing divergent constituencies — especially more established and traditional communities — also be part of the country’s first government, in order to provide it with broader legitimacy and support, rather than simply rely upon mainstream secular Zionists.

The largest party in the coalition besides Mapai was the United Religious Front, made of four religious parties spanning the gamut, from the historically anti-Zionist (and later non-Zionist) Haredi Agudat Yisrael and Poalei Agudat Yisrael parties to the fervently religious Zionist Mizrachi and Hapoel Hamizrachi parties.

The United Religious Front won 16 seats and to this day is the broadest religious party to run in a Knesset (or in this case, Constituent Assembly) election. 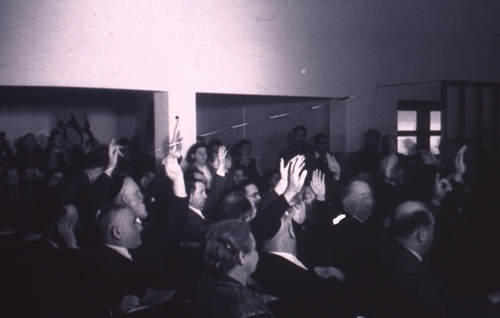 The party known as “Sephardim and Oriental Communities” also joined Ben-Gurion, with the goal of promoting the interests of its eponymous constituency in the new state. The Progressive Party joined, as well. Though not socialist like Mapai, it was also largely representative of secular Ashkenazic Jews.

The smallest party in the coalition, with two seats, was the Democratic List of Nazareth, led by two Arabs from the Galilean city: Seif el-Din el-Zoubi, who had fought in the Haganah, and Amin-Salim Jarjora, a respected educator and jurist. The Democratic List of Nazareth was aligned with Mapai, part of Ben-Gurion’s efforts to show that Jews and Arabs could coexist in the new State of Israel.

“Living in a movie”

A popular Hebrew expression meaning “to live in a movie” is often used to describe an improbable, unrealistic or unbelievable person, event or situation.

If the circumstances around the establishment of the “First Knesset” or its composition were not enough to employ this expression, then the setting of its meetings certainly could be, because the first Israeli government met in a movie theater.

Yes, a movie theater…. and one named the “Magic Cinema” no less.

When it opened in 1945, the Kesem (“Magic” in Hebrew) Cinema in Tel Aviv was the city’s most luxurious, boasting more than 1,100 upholstered seats and screening the international blockbusters of its day. 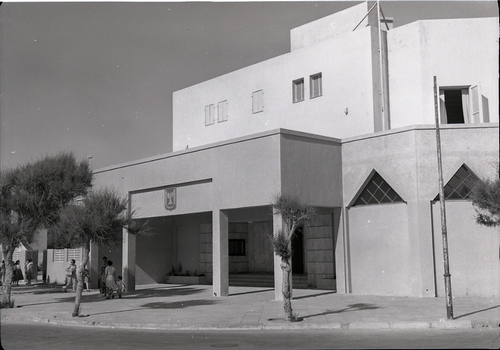 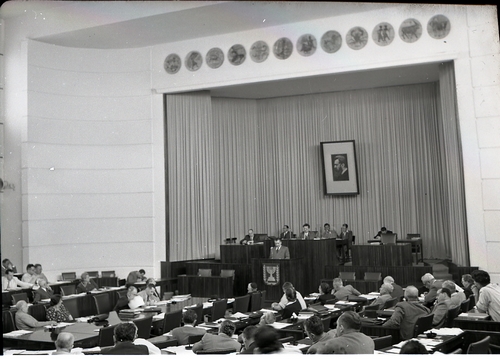 The structure’s life as a cinema, however, was short-lived.

With the establishment of the State of Israel in 1948, Kesem was repurposed to serve as headquarters for the Israeli Navy.

In 1949, it became the Parliament building, as the Knesset met there for most of its inaugural year. While it may seem strange for a national legislative body to meet in a movie theater, given the dearth of large assembly halls and the fact that Kesem was relatively new, spacious and centrally located, it actually made a lot of sense for the “Magic Cinema” to host the First Knesset.

In addition to ongoing Knesset meetings, Kesem was also the site of a bizarre, nearly successful attempt to assassinate David Ben-Gurion by a deranged kibbutznik shepherd who simply walked into the cinema building with an automatic weapon and a suitcase of pamphlets he had printed outlining his plans to bring world peace. 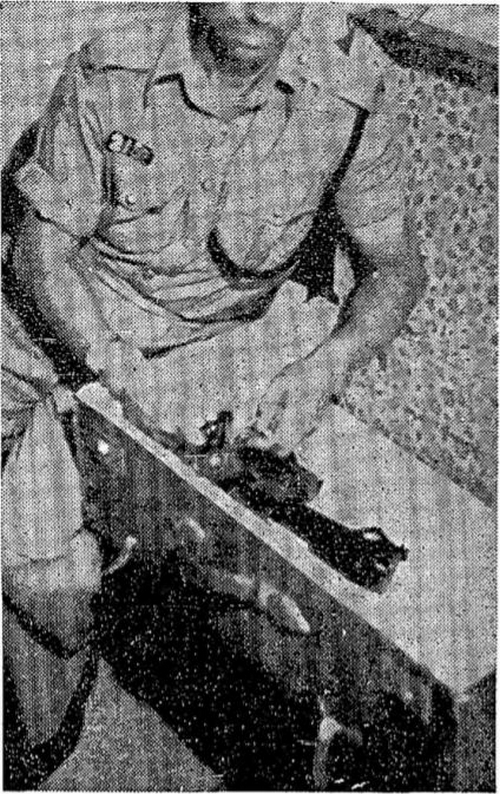 A policeman with the failed assassin’s suitcase and gun. (Published in Maariv, September 13, 1949. From the National Library of Israel Digital Collection)

Though he claimed that he wanted to commit suicide in the Knesset in order to bring attention to his plan, some contemporary reports recounted that the would-be assassin yelled, “I will kill Ben-Gurion!” after being tackled to the ground.

Israel’s first government didn’t last much longer after that — ending rather abruptly (and absurdly) when Ben-Gurion resigned on October 15, 1950.

He wanted to name a new Minister of Commerce and Industry, and according to the rules at the time, the appointment of a new minister required that the entire government resign…

That rule was soon fixed, but the next few governments led by Ben-Gurion did not last long either. He resigned again in early 1951, yet again in 1952 and once more the following year. 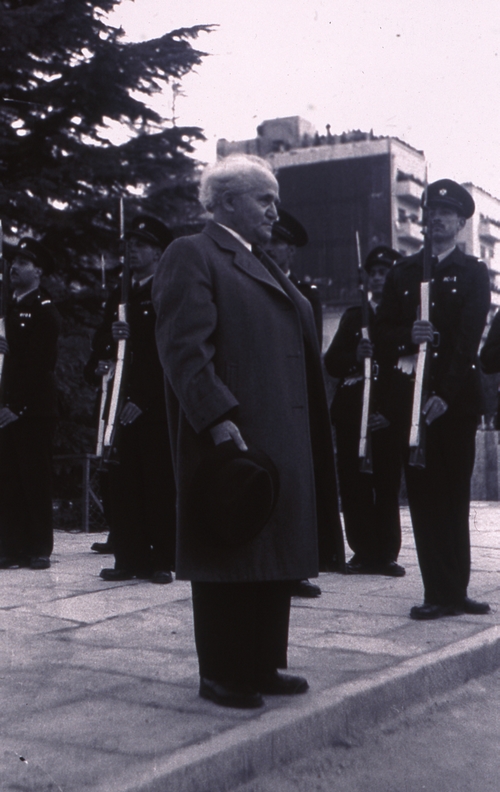 David Ben-Gurion on the first day of the Constituent Assembly, 14 February 1949 ( Marlin Levin. From the Meitar Collection, National Library of Israel Digital Collection)

The importance of establishing an initial functional government — no matter how short-lived — cannot be understated. Ben-Gurion and his diverse political allies deserve significant credit for that.

In many respects, that rather strange first government also set the stage for the country’s political landscape to “live in a movie” ever since.

This article first appeared on “The Librarians,” the National Library of Israel’s official online publication dedicated to Jewish, Israeli and Middle Eastern history, heritage and culture.