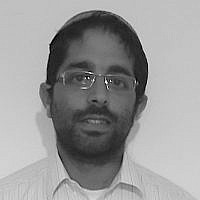 The Blogs
David Gross
Apply for a Blog
Advertisement
Please note that the posts on The Blogs are contributed by third parties. The opinions, facts and any media content in them are presented solely by the authors, and neither The Times of Israel nor its partners assume any responsibility for them. Please contact us in case of abuse. In case of abuse,
Report this post.

And it was in those days that there were Jews who lived by the sea in the Land of Israel. They lived among many Arabs surrounding them, and for many years that the Jews and Arabs would mingle in the markets and on the beaches. And the Jews created a burgeoning industry with hydroponic greenhouses, which created jobs for both Jews and Arabs. And lettuce without bugs did they create, and the Jewish mothers were exceedingly happy.

Yet at that time there arose an evil spirit among the Arab population, and they came to hate their Jewish neighbours, for the imams that were in their midst would declare them to be ‘pigs’ and ‘monkeys’. And the nations of the world did gather together, and they gave unto their gatherings names; and chief amongst them was UNRWA, and verily did the nations give much silver to the Arabs. But the silver fed the evil spirit of hatred amongst the Arabs, but the nations of the world cared not, and no oversight was forthcoming. And the Jews became fearful and were vigilant. And the Arabs did shoot rockets at the homes of the Jews, and they did augment their hatred still further.

Thus did the Arabs did shoot more rockets, and they did clamour against the “Occupation”. And the Israeli politicians did hear these cries and they said, “Why are we here in the first place?” And the ministers of Israel did bring forth the histories, and see that the land had been delivered unto them from their enemies. And they did say, “What are those crazy Jews doing there?” And a civil servant did tell to them, “Hath not we incentivised their presence there, and verily, doth not their produce constitute 40% of all produce exports?”

And there arose a Prime Minister in Israel, and his name was Ariel Sharon, and he was known as the “Father of the settlers.” And he did declare that ‘Netzarim was like Tel Aviv’.

Yet he did confound the nation by advocating removing the Jews who had invented the bug-less lettuces from their homes. For he did say, “They will no longer shoot at us once we are no longer in their midst.”

And those who had condemned the Prime Minister previously did praise him with great vigour, and they did cast doubts on those who remained unconvinced by the Prime Minister. And many did stand at the Knesset podium and did assure all and sundry that there was nothing to fear, for the State of Israel could always return its soldiers in the event of hostilities.

But many amongst the children of Israel remained unconvinced, and they did don orange garments. They did cry out to the heavens and to their elected representatives, and many prophesied amongst them, for they said “those brothers who live in the South will fall victims to concerted rocket attacks”, and there was much wailing and gnashing of teeth. Yet the response to their concerns was nought but a collective raspberry.

And it came to pass on the 9th day of the fifth month, that Israeli soldiers did remove every single Jew from Gaza, and they did reinter all the graves, and they did leave all that they had built, including the houses, schools and synagogues as well as the hydroponic greenhouses.

And it became clear that the government had not planned properly for their resettlement, and so the Jews of Gush Katif dwelled in caravans in the wilderness.

And the nations of the world noticed this tumult and they heralded a new era of peace, for behold! the stiff-necked Jews were finally listening to them and adhering at least in part to international law. For doth not the law of nations clearly state that the building of a house is more dangerous than the shooting of a missile.

Now once the Jews had left in their entirety, The Arabs came upon these very dangerous houses and the hydroponic greenhouses that had been constructed in defiance of all human morality, and in their zeal to stick it to the infidel, they smote down the structures until brick no longer lay upon brick. And they were exceedingly joyful, and danced upon the ruins while shooting their guns in the air.

And it came to pass, that a week went by, and the Arabs saw that the cowardly Jews had withdrawn and were downcast, and they resolved, “Let us shoot more missiles upon the Jews, for they are a stupid and cowardly people.” And they did so, night and day, in very great numbers for many years. And the nation of Israel cried out for their government to protect them, and to the nations of the world to defend them. Yet their cries went unanswered.

About the Author
David Gross was born in Geneva and grew up in London. He graduated from UCL in 2010 with a B.A. in Hebrew and Jewish Studies. He has previously served as Southern Fieldworker of Bnei Akiva UK. He has studied and taught in Yeshivat HaKotel, and currently teaches in Yeshivat Eretz HaTzvi. He will be starting an MBA at Bar Ilan in the coming academic year.
Related Topics
Related Posts
Comments