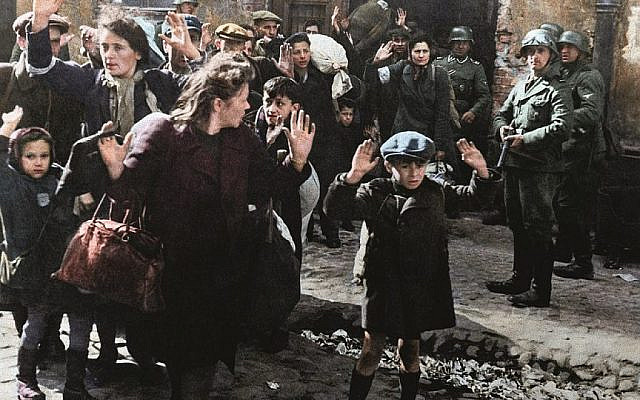 The Boy with Raised Hands (Jewishnews.timesofisrael.com)

Holding my magnifying glass, I study the enlarged print of the photo.

The boy stands apart from the crowd.

My eyes fixate on his hands.

I stand, raise my arms and try to capture his image and his pain.

For minutes, I hold my hands and the photograph high in the air.

My arms collapse to my sides.

I drop into my chair and refocus my attention on the photo.

“Was the boy ordered at gun point by the smirking SS officer, to leave the safety of the crowd, to be captured on film?

No, I can hear the photographer yelling, ‘Achtung Yid, yah you with the newsboy cap on, move away from those vermin, keep your hands up and don’t move until I tell you to.'”

The boy obeys the command, as the sun’s rays smash on his newsboy cap, exposing the face of fear.

A face that brings tears to my eyes.

The photographer smiles, “That shot will be selected for publication in “The Jewish Quarter of Warsaw is No More!”  Herr Himmler will be so pleased with that photo.

Knees that have tasted the rough cement edges of bunker floors and walls.

How long had this little Yid hid in that Warsaw Ghetto bunker?

When did he eat his last meal?

When was the last time he saw his momma and papa?

When did the kid hear the news that the Nazis were rounding up the Jews to be sent to extermination camps? To be gassed?

No, the Nazi propaganda photographer did not ask any of these questions.

The Nazi propaganda photographer was too busy planning his next shot to think about the boy’s life, his fate or the boy’s predicament.

A predicament which offered a few more days of life in exchange for the act of surrender.

Did the boy understand that surrender was only an illusion?

An illusion that by raising your hands toward the sky you would not die in a gas chamber.

A Hobsonian choice, a take-it-or-leave-it choice, well understood by the Warsaw Ghetto Jewish fighters and the Sicarii rebels based on top of Masada.

My eyes shift to the other Jews leaving the bunker.

Some carry their possessions in bags.

Yet the boy carries no sack.

I wonder, “What items hide inside the boy’s coat pockets?

A photo of his momma and papa;

A crust of stale bread;

A tin toy cowboy or Indian;

The names and addresses of relatives in America;

Or a sheet of paper bearing the Shema Yisrael.”

“Did the boy pray the Shema when he heard the sounds of battle as Jewish resistance fighters killed Nazis in the Warsaw Ghetto?”

For close to four weeks, the boy hears the cracks and whistles of bullets, the bang, bang, bang of rapid fire submachine guns and the booms of exploding bombs and hand grenades.

He hears the screams of the bunker babies after each explosion.

The bunker shakes and stinks of burnt carbon mixed with sulfur.

The dust causes the boy to choke and cry.

The boy coughs and closes his eyes picturing a Nazi soldier holding a flame thrower.

The flames explode in the bunker—incinerating all of occupants.

For almost a month, the boy must have thought:

“Thank G-d we’re fighting back. I wish I had a gun or a grenade.

How many Nazis have died or were wounded by Jewish bullets?

During those 28 days, the boy must have asked:

Are my momma or papa still alive?

Where are my brothers or sisters?

How many days do I have left?

Why was I born Jewish?”

I stand as if I am in temple and with both of my hands, I hold the enlarged print of the Warsaw Ghetto boy over my head—surrendering it to the heavens.

My arms ache, my tears fall and my heart weeps for the one and a half million Jewish boys and girls murdered by the Nazis.