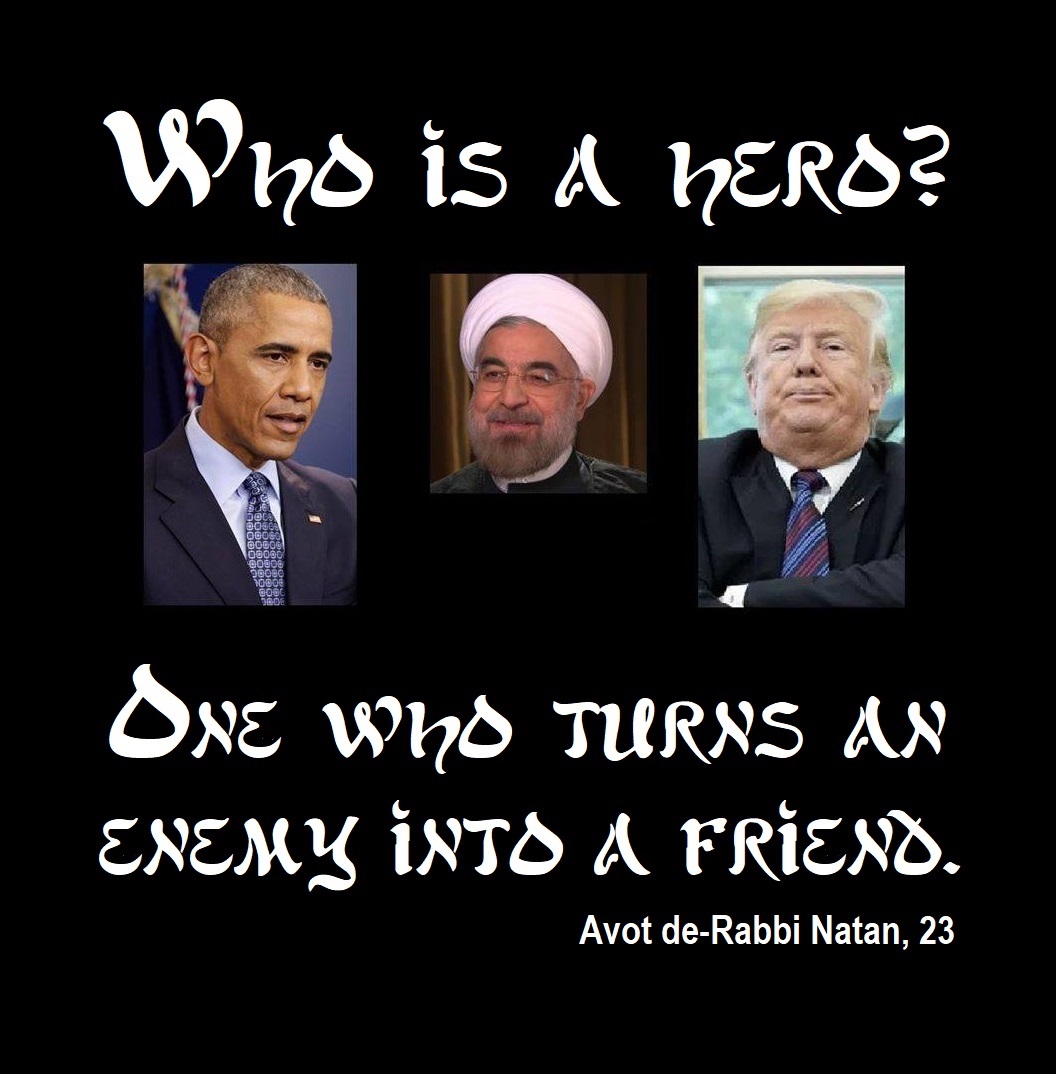 With the chaos created by the recent killing of Iran’s top military leader, understanding what things were like before Donald Trump gave his famous anti-Midas touch (turning gold into lead) to U.S.-Iran relations one needs to look back about seven years.

It’s 2013. The nuclear sanctions are not working. They’re causing considerable strain on Iran’s economy. But the nation’s nuclear efforts aren’t slowed at all. The IAEA, which had the sort of access it never had in Iraq under Saddam, reported that Iran had dug in and was actually accelerating its enrichment.

Then in mid-June of 2013 cleric and former nuclear negotiator Hassan Rouhani was elected. And his irrational predecessor Mahmoud Ahmedinijad no longer set the tone.

So, Obama acted. While there’s no way to establish this as causal, from the moment of his first overture things got better.

In late August IAEA inspectors reported that Iran slowed its accumulation of enriched uranium that can be quickly turned into fuel for an atomic bomb. (The IAEA has its own website which contained its inspection reports from before and after the JCPOA.)

Still, this had nothing to do with Obama.  Nobody seems to know WHY Iran had slowed enrichment. But the speculation at the time was that Rouhani, a moderate cleric and former nuclear negotiator, wanted to set a different, less confrontational tone.

In late September of 2013 Obama spoke by phone with President Rouhani, the first direct contact between the leaders of Iran and the United States since 1979.

Obama said the two leaders discussed Iran’s nuclear program and said he was persuaded there was a basis for an agreement.

One month later Iran agreed with the UN on a road map for inspections. No game-playing with inspections like Saddam Hussein did.

And at the end of that year, IAEA inspectors reported that for the first time in years, they had PROOF the Iranians slowed their enrichment. In 2013 some sanctions were eased.

Obama decided to enter the Persian nuclear bazaar to haggle with the masters of negotiation. And it worked out well.

Did I ‘like’ this deal? Of the countless imaginable choices, the West could have made to get Iran to back off on nuclear weapons research, the JCPOA could be considered the second worst.

What is the worst?  Every other possible choice. The stridency of objections to the Iran agreement were unfettered by anything remotely plausible, including doing nothing.

It’s not a fraction as bad as its detractors make it out to be, something they would understand were it not for ‘going Trump in the head’  – filtering everything that happens through hatred of Obama.

Moreover, it was ultimately in Israel’s interests for the US and Iran to reach an agreement, even if it is a less than an ideal one.

To begin with, an agreement was the only way to prevent Iran from acquiring nuclear weapons short of an invasion and occupation of the country. Bombing by itself will not do it. In fact, unless a coalition was willing to attack and invade Iran, bombing would have made things worse.

Israel would have benefited both directly and indirectly from this nuclear deal and especially larger rapprochement. Israel would gain several direct benefits from a larger warming of U.S.-Iranian relations, which a nuclear deal could have facilitated. Iran was paying in separate sanctions for its anti-Israeli tirades and actions. The JCPOA did not ease those.  But the trust built by the agreement could have been the basis for further diplomatic progress in other areas.

An easing of tensions with the U.S. would have forced Iranian leaders to constrain their anti-Israeli rhetoric and actions, or risk losing their new partner.

While Israel and Iran might never enjoy the same relationship it did under the Shah or even the first decade of the Islamic Republic, a U.S.-allied Iran would be MUCH less of a burden for Israel.

History is quite clear on this point: U.S. Middle Eastern allies—notably Egypt since Sadat—have been much less hostile to the Jewish state than countries that have been U.S. adversaries.

Israel would also benefit indirectly from a U.S.-Iran nuclear deal and possible rapprochement. That’s because either of these agreements would spark panic in Sunni Arab capitals. For the foreseeable future, then, Israel would enjoy some breathing room, which it would obtain as these governments would be preoccupied with Iran for the foreseeable future.

Indeed, just the possibility of an interim nuclear deal between the U.S. and Iran had created rumors of Saudi Arabia seeking tighter cooperation with Israel without having to suffer a president bought by Saudi Arabia for tens of millions of dollars.

The nuclear deal made it less likely, at least for the time being, that Israel would attack Iran. That being said, the possibility of an Israeli attack on Iran was already remote long before Iran and the P5+1 began to hold their talks.

On the other hand, if the agreement was ineffective as Bibi and other like-minded people insist it was, Israel could have decided to take more substantive measures.

The P5+1 (EU3+3. Whatever) didn’t have a choice. Sanctions did nothing but make Iran dig in its heels on its nuclear program. Of all the possible scenarios, this was the best.

A military solution was out of the question, no matter how much some people fantasized about one.

If Israel was going to strike Iran’s nuclear facilities, it would have done so a long time ago.

Since getting caught off-guard at the beginning of the Yom Kippur War in 1973, Israel has generally acted proactively to thwart security threats. On no issue has this been truer than with nuclear-weapon programs.

For example, Israel bombed Saddam Hussein’s program when it consisted of just a single nuclear reactor. According to ABC News, Israel struck Syria’s lone nuclear reactor just months after discovering it. The IAEA had been completely in the dark about the reactor, and took years to confirm the building was in fact housing one.

Contrast this with Israel’s policy toward Iran’s nuclear program.

The uranium-enrichment facility in Natanz and the heavy-water reactor at Arak first became public knowledge in 2003.

In that time Israel watched as the program expanded into two fully operational nuclear facilities, a budding nuclear-research reactor, and countless other well-protected and dispersed sites.

Furthermore, America’s extreme reluctance to initiate strikes on Iran was made clear to Israel at least as far back as 2008.  It would be completely at odds with how Israel operates for it to stand by for 13 years, until the last minute when faced with what it views as an existential threat.

Countless Israeli and American military leaders have shunned the notion of a military solution.

The nations of the P5+1 didn’t “like” it. And you can be sure that the mullahs in Iran didn’t like it. But politics is the art of the possible. And the people of Iran loved it.

All things considered, nothing else that would have retarded their program at the time.

A military strike was out of the question, unless the goal is to inject even more resolve in the regime and to destabilize the region more than at any time since the toppling of Saddam Hussein’s regime.

When Donald Trump walked away from the Iran agreement, he showed the world that as long as he is president, the United States cannot be trusted,

The United States has now killed Qasem Soleimani, leader of the Islamic Revolutionary Guard Corps’ elite Quds Force, and one of the most infamous military operators in the Middle East.

But unlike the assassination of Osama bin Laden, killing Soleimani is the analog of killing the General of the Army or Commander of the United States Air Force. As such, it might soon have the United States in armed conflict as Donald Trump sends Americans not named Trump to fight and die in a war entirely of his making.