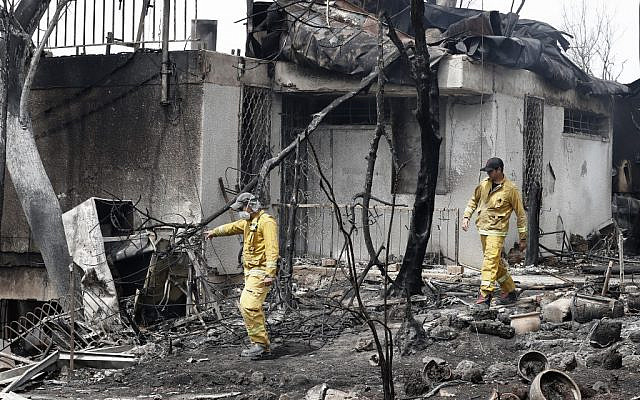 Israeli firefighters check a house that was badly damaged by a fire amid an extreme heat wave in the village of Mevo Modi'im, in central Israel on May 24, 2019. (JACK GUEZ / AFP)

Expectations were running high for the government cabinet meeting this past Sunday. On the agenda was a long-term climate change policy of singular importance to Israel’s wellbeing and survival. This was the first government for which the climate crisis emerged as a salient issue during coalition negotiations. A climate law and a carbon tax were part of the ultimate platform to which all parties in the government agreed.

Unfortunately, the ultimate decision was a far cry from what environmentalists had anticipated and what our beleaguered planet needs.

Some context: The UN Paris Climate accord from 2015 was far from perfect, but it was the best deal that could be made and still keep China and India engaged as partners in the global effort. The Paris strategy relied on the assumption that there would be iterative progress in future years, as countries became more committed to the issue and new technologies offered greater opportunities for greenhouse gas reduction.

In November 2021, in Glasgow Scotland, the same international community is to reconvene to see what progress has been made. Countries are expected to up their game, presenting a new “National Determined Contribution” (NDC) containing an improved, national climate change mitigation program.

In 2015, Israel attended the Paris conference and presented its NDC. This in itself was unprecedented: never before had an Israeli prime minister joined an international environmental UN event, and never before had it made quantifiable commitments to reduce its greenhouse gas emissions. But the actual level of Israeli commitment proved anemic. While other countries spoke of meaningful cuts in their emissions, Israel agreed to reduce its emissions only on a per capita basis, which meant that it continued to increase its greenhouse gas emissions at a time when scientists said that everyone needed to reduce them by 7% annually.

Six years later, we in Israel presumably have learned a lot. Not only have the extreme weather events – flooding, forest fires and heatwaves – begun to manifest themselves locally. A new movement concerned about imminent climate chaos had emerged. Inspired by Gretta Thunberg, the tenacious, teenage Swedish climate advocate, thousands of young Israelis are vociferously demanding a safer future. No less important than the change in the local political calculus is the change in the economic calculus: renewable energy today is far less expensive than electricity powered by fossil fuels.

And so, on Sunday the government convened to discuss the program assembled by the professionals at Israel’s Ministry of Environmental Protection. The plan had been vetted by climate experts and closed many of the gaps with the European policies, which for some time have taken the climate crisis seriously. Sadly, just days before it reached the cabinet table, the proposed government decision was amended, one could even argue eviscerated. What remains is far more ambitious than the pitiful program submitted at Paris, but a far cry from the kind of commitment that is required.

Looking at the “half-full” components of the decision, there were a number of important objectives that survived the Treasury and Energy Ministries revisions:

Many long-term goals in many areas are actually impressive: By 2050, the government sees an overall reduction of 85% in emissions relative to 2015. This will be possible due to the 96% reductions in greenhouse gas emissions in transportation anticipated, 85% reduction target in the electricity sector and 92% in municipal waste which were endorsed.

For the first time Israel’s defense minister, Benny Gantz, weighed in on the issue and explained that from a security perspective, electricity production, based on dispersed solar facilities was far more secure than the present system, which relies on large gas-fired facilities that will surely be targeted by our enemies in any future round of military conflict.

Yet, environmentalists were ultimately disappointed: scientists tell us that we have roughly ten years to make massive cuts to avert climate chaos. Unfortunately, the critical short-term objectives proposed by the environmental ministry were left on the cutting room floor.

These omissions include: 40% renewable electricity by 2030 (and 95% by 2050); a commitment that 50% of new buildings in 2030 be based on low carbon, green technologies; and adoption of reasonable energy efficiency standards by 2025. The all-important carbon tax – critical for influencing the polluting decisions of individuals – was conspicuously absent. And even before the proposed policy was cut back, no one ever dreamed of reigning in “popular” greenhouse gas culprits, like plane flights or beef consumption

Today, Israel lags far behind the accepted level of renewable energy production, energy efficiency and low carbon industrial standards found among its peers in the OECD. For example, Israel only set its renewable electricity target for 2030 at 27%. Joe Biden’s 2035 US target is 100%.

If this was an ordinary environmental issue, such pouting by environmentalists after clear progress might be criticized as being ungrateful or extremist. But climate change is not an ordinary environmental issue. Carbon dioxide released into the atmosphere remains for an average of 300 years. Climate scientists explain that the global impacts are not linear: the planet may soon cross a threshold where the weather, sea-level rise and related effects will worsen dramatically due to a cascade of synergetic, and irreversible effects, such as melting ice or ocean acidification.

Israel took an important step on Sunday. Unfortunately, it is not enough.