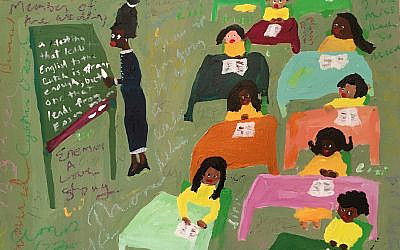 In America, grievance writ large has recently been deployed to great political gain on the right: witness the ramping up of white rage against so-called “elites,” the more than 74 million votes that did indeed go to the former liar-in-chief, and the resulting violent and vile insurrection at the nation’s capital.  Call it what you will — grievance, resentment, grudge, pique, indignation — it’s all the same, and it’s all corrosive. Have you ever held a grudge or nursed resentment? I have, and it isn’t nice. As they say in 12-step circles, “Holding a grudge is like drinking poison and waiting for the other person to die.” So no, I wouldn’t personally recommend it.

But resentment is a powerful motivator, an intoxicant in its own right, and once it gets a hold of a crowd, it’s virulent. Pogroms, anyone? Or to take a much more recent example, why not walk into a synagogue in Pittsburgh and murder the worshipers?

Even so, Jews in America are rarely the target of mass hatred, injustice, economic disadvantage, or fear.  Black people are. That’s just a fact. Racism is ongoing, systematic, and corrosive, and it shows up most glaringly in the large wage-, housing-, health-care-, and educational- gaps between white and Black Americans. (I am not addressing other minority groups, such as Latinos or Asians, who also face challenges.) The reasons are complex, historical, and deep-rooted. But that doesn’t mean that the suffering that Black Americans experience is their fault (single-parent households! drugs!) any more than it was the fault of Ashkenazi Jews living in 19th-century Silesia that they dwelled in hovels, ate raw onions, had rough manners, and rarely bathed. Just for starters, the U.S. federal policy of redlining, wherein Black Americans were more or less herded into urban neighborhoods, isolated, and subsequently deprived of public services, pretty much-guaranteed ghettoization. Not to put too fine a point on it, but this s#&!! was on the books until 1968. That’s five minutes ago.

But now we’re in the era of Black Lives Matter — about time, if you ask me — and it’s a whole new set of stupid. It’s no secret that, on the whole, the more elite the American university or college, the more committed the institution is to liberal ideology, with its underside of squelching non-liberal opinion, including on matters concerning Israel. The same rigid ideology that holds that English departments rid themselves of the teaching of The Adventures of Huckleberry Finn because it contains the “N-word” has widened out into academia at large, such that even at big public universities faculty are wary of committing the slightest misstep, for fear that a slip might be construed as a racially demeaning or motivated. This is bad for everyone.

Call it what you will, but the hypersensitivity of some students to take offense had an apotheosis — brought to light brilliantly by reporter Michael Powell in The New York Times — in a recent case concerning a Black student named Oumou Kanoute at Smith College, in Massachusetts, who claimed that she’d experienced racism and intimidation at the hands of a white campus police officer and white janitor.

“All I did was be Black,” Ms. Kanoute wrote [on Facebook}. “It’s outrageous that some people question my being at Smith College, and my existence overall as a woman of color.”

And with that, Ms. Kanoute set off a whole series of events, including copious apologies from the President of the college, the suspension of two working-class Smith college employees, and the overall ramping-up, at Smith, of the youthful proclivity to claim the moral high ground without actually knowing the facts. After an extensive investigation, Smith College determined that racism had not been at play concerning the incident that Ms. Kanoute found so troubling. From what I understand, nothing at all occurred other than what occurs on college campuses everywhere:  a student who wasn’t where she was supposed to be was asked what she was doing there.

I can’t even count the times I’ve been told by various authority figures to get lost.

As for the young lady who started all the trouble: I get it. Once upon a time, I was a Jewish kid with curly Jewish hair and a terror of sports in an otherwise ur-waspy hyper-competitive school where if you didn’t do well on the hockey fields, God help you. My years there were uncomfortable.

But that doesn’t mean I got to start my own little reign of terror because the popular blonde girls didn’t invite me to go to their once-restricted country clubs. Nor did it mean I got to cry “antisemitism” when a beloved teacher asked me about why I wasn’t in school on Yom Kippur. Should we, as Jews, ask universities to scrub their Art History curriculum of Medieval art because so much of it depicts Jews as monsters and demons? Or get rid of The Great Gatsby because it contains a criminal Jewish character straight out of central stereotype-casting?

Because the thing is, bitches: people are going to rough up your sensibilities, hurt your feelings, and attempt to cross your boundaries no matter what you look, sound, or smell like. It’s what people do.

To my mind, there are two equally invasive and toxic tendencies here. The first is the repression of the free exchange of ideas in academia, without which academia isn’t academia at all, but indoctrination.  At Smith and elsewhere, middle-aged (and older) professors have to undergo racial and gender sensitivity training, and if sensitivity training isn’t nearly dire as the public humiliations, beatings, and “reeducation” of such evil-doers as classical musicians, “capitalists,” well-off farmers and other baddies at the hands of youthful Red Guards during the Chinese Cultural Revolution, we should still be wary.

More troubling is what campus mono-voice could mean for the millions of Black Americans who don’t get to go to Smith College or its equivalent, who aren’t represented by the ACLU of Massachusetts (as Ms. Kanoute is), and whose outbursts, when they have them, can land them in jail. Any student of any race or ethnicity who attends a solid four-year college is already ahead of the game no matter what.  That’s why as soon as my own people — Jews — landed in America they started sending their children to college. More than any other factor in America today, a college education is the great leveler, and the more elite the institution, the bigger the bounce afterward. Is it fair? Of course not. But does it serve its Black students in the same way it traditionally has for everyone else with the brains, smarts, balls, connections, or money to get in? Absolutely.

What pisses me off the most is how each time a (typically) white dean, college President, or senior faculty is cowed by the accusation of racism into a display of apologies or more, (including such goodies as “identity-based” dorms) two extremely bad things happen. The first, as I’ve already mentioned, is that the very real injustice against a whole broad swath of struggling and working-class Black Americans gets sidelined. The second is that white grievance is stirred up all over again, so much so that lefty liberals like me find themselves agreeing with the likes of Tucker Carlson when he called what happened at Smith College a “hate crime hoax.”

The kind of dust-up that occurred at Smith and continues to occur on campuses from coast to coast is grist for the white-grievance mill — the same mill who brought us four years of Trump and Co. and could readily deliver Trump II in 2024. That’s not good for the future body politic, and it’s terrible for minority groups, including, and perhaps especially, Black people.