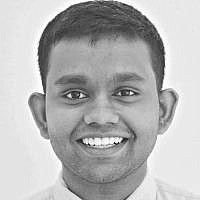 The Blogs
Andrew Jose
Independent Analyst & Freelance Writer
Apply for a Blog
Please note that the posts on The Blogs are contributed by third parties. The opinions, facts and any media content in them are presented solely by the authors, and neither The Times of Israel nor its partners assume any responsibility for them. Please contact us in case of abuse. In case of abuse,
Report this post. 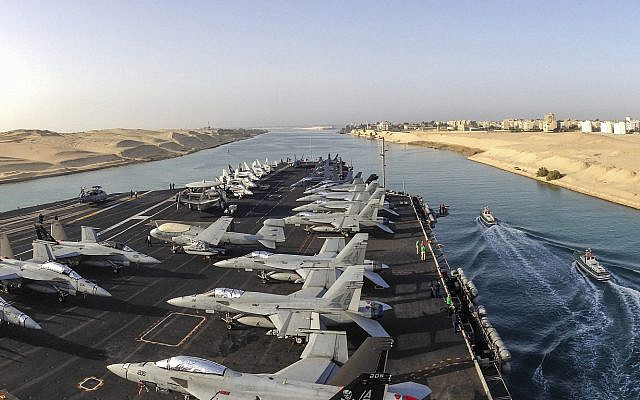 In the last decade, the Suez has facilitated the transit of 841.525 million tons of goods, on average. Many ships, including Israeli ones, heading east utilize it to reach their destinations quicker than by sailing around Africa. Permanent closure of the Suez will heavily hit international trade.

Whether Israel and the UAE discussed this idea remains outside this discussion’s scope. What is relevant, however, is the idea itself. The case for building an Israeli Suez Canal alternative, and consequently ending Egypt’s monopoly on Red Sea-Mediterranean transit, is that such a canal will benefit Israel’s and the world’s economy and benefit Israel’s international relations and security.

These numbers prove that demand for Red Sea-Mediterranean transit has been rising, bringing Egypt a revenue-boom (assuming  COVID-19 is a temporary, adverse demand shock). This revenue, considered a lifeline for Egypt’s economy, pays for some of Egypt’s state expenditures and has been responsible for the Arab republic’s economic recovery since its 2011 political crisis. If this trend in traffic growth continues, Egypt will be gaining more revenue post-COVID.

Israel, like Egypt, has a geographical advantage favorable to the construction of a competing waterway. Egypt’s edge, which enabled the Suez’s creation, was the Isthmus of Suez, resulting from the Gulf of Suez jutting in and reducing the land distance between the Mediterranean and the Red Sea. Israel has a similar advantage, with the Gulf of Aqaba being close to the Mediterranean.

This Israeli geographical advantage, and the rise in demand for the Suez, signals that if Israel digs a Mediterranean-Red Sea canal, it can channel some of the revenue from ships sailing between the two seas away from Egypt towards itself. And like Egypt, Israel can use its canal’s revenue to reduce some of the Israeli taxpayer’s tax obligations.

The consequent rise in Israelis’ disposable incomes will raise consumer spending, thereby stimulating the native economy. It can also increase savings, which banks can then lend to start-ups while paying depositors an interest, thus providing the necessary funding for innovators. Their innovation can then increase Israel’s productivity and uplift its economy.

Furthermore, the canal’s construction will also create new jobs and spur the development of communities nearby.

The benefits of an Israeli canal won’t be exclusive to Israel — the world stands to gain. In recent months, reports emerged of ships avoiding the Suez by going around southern Africa, choosing longer travel time, because of Egyptian tolls, which go up to 700,000$. Egypt’s near-monopolist position and the relatively inelastic demand for the canal allow them to charge high fees without suffering much loss in demand. Some ships need the Suez for certain goods, despite the expenses.

However, when Israel constructs another canal, ships now forced to go around Africa can retake a shorter route, thanks to fees for Red Sea-Mediterranean transit falling due to Israel-Egypt competition. No longer will Egypt be powerful to set whatever price it wants for the Suez because Israel’s canal will become a close substitute. If Egypt sets prices too high, ships will use Israel’s waterway. And vice versa. The falling prices will then serve as a price signal, encouraging more shipping through both canals, thus benefiting international trade.

One might ask how falling prices will benefit Israel; will they not reduce Israel’s revenue?

To find an answer, one must consider Israel’s advantage — it hasn’t built a canal yet. Hence, Israel can use available knowledge on the Suez to plan a waterway with fewer operation costs and greater efficiency and capacity. Egypt does not have this edge because it already has the Suez, and modifications might require expensive, destructive changes. Therefore, using insights gained from a study of the Suez, Israel can then construct a canal permitting them to charge prices below what Egypt can afford to levy while handling more ships, thus, ensuring Israel profits well through an economy of scale.

The Israeli canal will also give international trade security by offering the world an alternative Mediterranean-Red Sea canal. Any adverse shocks to the movement of goods between the two seas, due to closure resulting from civil unrest or repairs, would be less damaging if there were two canals instead of one. And the economic importance Israel will gain from its waterway will help its foreign policy and security.

Many countries in the Gulf, East Africa, and Asia need the Suez to send and receive ships to and from northern Europe and the Mediterranean region. When Israel opens its canal, offering lower tolls, these countries will be incentivized to use Israel’s waterway, thus engaging in transactions with Israel.

The World Bank notes that intense trading reduces the “duration” and “intensity of conflict” between countries while disincentivizing some from supporting civil conflict within another. Therefore, when Israel opens its canal, the economic benefits of the commercial relationships it will consequently establish will benefit Israeli foreign relations by reducing many countries’ hostilities towards Israel.

The waterway will also ensure that other states have a rational interest in safeguarding Israeli security because a threat to Israel will threaten the canal and, consequently, global trade. Therefore, they will have a stake in working against anti-Israel forces.

Questions arise, however, about the impact an Israeli canal will have on Israel-Egypt ties. It might create short-term Egypt-Israel tensions, an expectable situation when a new player enters a market long dominated by one. However, in the long run, as Egypt improves the Suez to facilitate lower prices and more traffic, both countries will acclimatize to coexisting in the market.

Furthermore, the growing pro-Israel consensus in the Middle-East and strategic forces pushing for co-operation against what many Middle Eastern countries consider to be common threats such as Iranian and Turkish aggression might quickly dissipate or significantly dampen any negative short-run effect this canal will have on Egypt-Israel ties. Therefore, there is no reason to worry about any long-term adverse effects Israel’s waterway would have on Israel’s relationship with Egypt.

In conclusion, an Israeli-built Suez alternative will benefit Israel’s economy, the global economy, Israel’s international relations, and security. It will help Israel by bringing revenue that can pay some state expenditures, freeing Israeli taxpayers from those tax burdens; the rise in Israelis’ disposable incomes will stimulate the economy through increased consumer spending, or indirectly through increased savings. The canal will also help the global economy by lowering prices for Mediterranean-Red Sea transit through Israel-Egypt competition. The lower prices will then stimulate an expansion of international shipping. Having two canals (including the Suez) will also provide the global economy security against the other’s closure. Furthermore, the waterway will tie Israel and its safety tightly with other countries’ self-interests, thus, promoting peace and security. The case for an Israeli-built Suez Canal alternative, therefore, remains strong.

About the Author
Andrew Jose is an independent analyst and freelance writer with interests in Political Philosophy, Comparative Politics, International Economics, Foreign Policy, Jurisprudence, and Literature. An International Economics major, with Government and Philosophy as minors, he is a student at Georgetown University's branch campus abroad in Qatar. Andrew is also a coordinator for the organization 'Students For Liberty,' an organization that seeks to sow the seeds for a freer future by promoting ideas of social, individual, political, and economic liberty. And, he is a contributor to the student publication Lone Conservative.
Related Topics
Related Posts
Comments