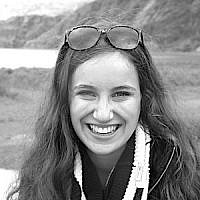 The Blogs
Talya Gordon
Apply for a Blog
Advertisement
Please note that the posts on The Blogs are contributed by third parties. The opinions, facts and any media content in them are presented solely by the authors, and neither The Times of Israel nor its partners assume any responsibility for them. Please contact us in case of abuse. In case of abuse,
Report this post.

I’ve walked into the Beit Hamidrash plenty of times, for years; then why am I noticing this now!?

These frantic thoughts ran through my mind for the first time last month as I glanced around my school’s Beit Midrash, scanning its dimensions and trying to make sense of my flared up anxiety. It was the same, slightly cold, beige-carpeted prayer room, with tall windows that stretched up to the ceiling and overlooked the cracked sidewalk in front of the building. The room was now darkened because school hadn’t started yet, though much natural light from the cloudy day outside crept through the windowsills. The innumerable religious texts and miscellaneous books lay in the shadowy bookshelves, as usual. I walked into the room, just as I did everyday, but for some reason today I was different. On this day I was more alert and perceptive than ever before. As I walked into the room I noticed that the Aron Kodesh, the ark containing the Sefer Torah, was off center towards the boy’s side. Since the Machitza is taller than the Aron, inevitably the girls’ view of the Aron is obstructed. The room was always set up like this, but the misogynistic implications now became blatantly obvious to me.

Now let’s go back in time. Just a few weeks earlier I recalled nervously sitting in my desk during class. I fidgeted uncomfortably while debating whether to ask my question. Eventually I raised my hand figuring I had nothing to lose.

“Rav, why do some shuls place the Machitza in different places,” I inquired curiously. My teacher looked at me inquisitively, trying to figure out my motivation. At the time I wasn’t talking about our Beit Midrash at school but rather the shul I attend every Saturday. He calmly answered, “well, many girls don’t even daven all the time so they should first work on themselves and then question the setup of the shul.”

While his claim did have validity, for just like everyone else, I am tempted to talk in davening, I was shocked at his insensitivity to my feeling of exclusion during davening. Later that week another teacher disregarded my concern with my role as a woman in Judaism by stating that “men and women have different roles.” While this was once again valid, I was growing increasingly frustrated with the unsatisfactory answers to my questions. I didn’t understand why I was shushed when I sang proudly during davening and why I constantly felt that the only possible position for me during davening was a passive one. As I grew more jittery I knew that I needed to seek out the answers to my concerns.

I don’t claim to be any expert on Halacha, Jewish law, and therefore knew the answer to my question would need to be answered by someone with higher authority. As I sought answers from reliable Modern Orthodox authorities that I felt understood my religious views, I realized that the question was more complex than I thought—there are many different valid opinions as to where to place the Aron Kodesh and the Machitza in a place of prayer. Intrigued and perplexed by which interpretation felt satisfactory to me, I delved deeper into my research and became even more troubled.

You see, what I realized was that there was an underlying issue which was more concerning: the inability for the students at my school, as well as students in countless schools, to respect one another. While on the whole authoritative figures tried their best to answer my questions with care and respect, many of my own peers scoffed at my concern of a woman’s involvement in prayer. Some of my peers were respectful, but those who weren’t had no shame. In fact, on one occasion when a girl was given the sefer Torah during shachrit (the morning prayer service) and brought it on to the girls side to be kissed by excitedly awaiting girls, chaos ensued. Boys moved the Aron Kodesh back onto the boy’s side and sneered as the girls kissed the Torah. A few of the boys even walked out of the room because they were so offended. And when asked why they felt so uncomfortable, they responded “that’s just how I feel. I don’t need to have a reason, or be grounded in a specific tradition.” My curiosity about the setup of the Beit Midrash now became my secondary concern; the main issue was the blatant lack of respect.

Praying to God in a place of worship is a matter to be respected, and the lack thereof astounded me. While we all claim to be religious Jews arguing about different ways to pray, we were clearly lacking a fundamental concept that is at the core of Judaism, loving your neighbor as you love yourself. Respecting different opinions and allowing yourself to sympathize with those who are a different gender, religious denomination, or belief system is essential in Judaism. Without the value of acceptance, the foundation of Judaism shatters. Human beings thrive on knowledge acquired from one another, and so we must open our ears to opinions that differ from our own. Now I know that during davening I sometimes impulsively whisper to my neighbor, but we all have room to grow in our connection to God. My weakness may be my inability to be silent for an entire school period, while my friend’s weakness may be his or her struggle with the laws of kashrut (dietary laws). Whatever it may be, we should strive to better ourselves with a foundation of mutual love and respect.

I might not be a halachic source but what I do know is that Modern Orthodoxy aims to include women within the realms of Halacha. This basis gave me enough of a motivation to delve into my research. I, along with the rest of my school, participated in a day of learning dedicated solely to studying the Halachic sources for how a Jewish place of worship should be set up. As we began to study the sources for where you place the Aron and Machitza I felt empowered—finally I was utilizing the texts to understand the reasoning behind various opinions. Whereas before I was ignorant, now I was finally learning how to back up my opinions with textual support and sound both educated and intelligent. The day of learning was necessary for it dispelled common misconceptions and supplied us with knowledge, and subsequently powerful arguments. What I also noticed was that while opposing viewpoints were certainly present throughout the texts, they were respectful of one another. If these Halachic authorities were able to respectfully disagree, then so should we. We should learn from their example that in order to solve an issue, a mutual respect must be present. Without that foundation we crumble, but with it we thrive and prosper, soaring to new heights.

About the Author
Talya Gordon is an 18 year old student studying at Midreshet Lidenbaum in Jerusalem for the year. She plans on studying at the University of Maryland next year. Talya is one of 5 children to South African parents. She attends congregation Beth Tefillah where she has been a youth leader for the past 4 years. Talya is passionate about her love for Israel and is an active member of the ATID program which empowers students to develop a nuanced opinion on the Arab-israeli conflict.
Related Topics
Related Posts
Comments