It’s a chapter in Israel’s short history which has not received the attention it deserved – until now. Channel 11 (Kan)  recently broadcast a three-part documentary series on the ma’abarot. These were transit camps which greeted hundreds of thousands of immigrants to Israel in the 1950s and 1960s, doubling the local population almost overnight. The newcomers were promised that their stay would be transitory, but some remained in the camps for up to 13 years.

While  arrivals could be housed in property abandoned by Arabs during the 1948 War of Independence, for instance in Jaffa, the vast majority were sent to former British army barracks and from 1950 to camps of tents, wooden or tin huts. The camps were fenced in with barbed wire and eerily reminiscent of concentration camps. One immigrant was shown to a large tent, only to learn that his family would have to share it with another family with seven children. Instructions were boomed to the residents through a megaphone. One religious family thought initially it was the  voice of God.

The conditions were dire and the camp residents were at the mercy of the elements. Refugees from Iraq recalled  their tents collapsing under the weight of  snow. Children tramped through puddles and mud. Meanwhile a war raged outside, taking a heavy toll – one percent – of the population. The meager rations the immigrants were promised often did not materialise.

Jews came from Poland, Romania and Bulgaria, but the bulk was from Muslim countries. Spraying with DDT to protect against ringworm was the norm. One European Jewess said that she had been sprayed with DDT on every stop she made on her way to Israel. Another was shown smiling as he was sprayed with the chemical. But the reason for the DDT was not explained to Jews from Muslim countries – hence the myth arose that the Israeli authorities were singling them out for discriminatory treatment. 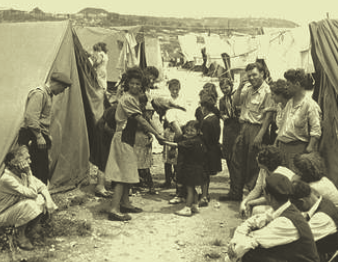 Refugees from Yemen at the Ein Shemer camp, 1950 (IGPO)

‘Bring a million Jews’, Prime Minister Ben Gurion had declared, even though many newcomers – especially the Jews of Yemen – arrived sick. The documentary showed starving children with twisted limbs. The new state tried to do what it could to save them, but nurses and doctors had stones thrown at them if they tried to move the children to hospital.

Inevitably, Part 1 of the programme dealt with the scandal of the ‘disappeared children’.  Parents were told that their children had died but were not given death certificates, nor even shown the bodies. One Yemeni father was told that he might lose his job if he complained.

A nurse said she did not think that children were being trafficked for an adoption racket. Chaos reigned. Parents moved from one transit camp to another, sometimes leaving their children behind, she claimed.

For many, their time in the ma’abarot was a  period of  discomfort  and distress. The disappointment was palpable – ‘for this we came to Israel?’ they asked. But ultimately, despite all the hardships, 586,000 Jews became successfully integrated into Israeli society and never looked back.