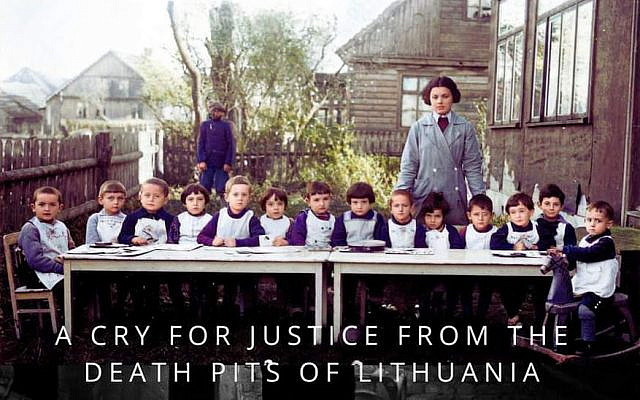 In 1941, Jews were murdered in Lithuania – everywhere. There were approximately two hundred and twenty thousand individual murder crimes, one, by one, by one. Of the many thousands of Lithuanian murderers, rapists and thieves who committed these crimes, Lithuania did not punish a single one. Rather, truth about their criminality has been suppressed – until now.

Jews were slaughtered with gleeful enthusiasm, their bodies dumped into death pits. Lithuanians and Nazis did not waste money on bullets, mostly, they threw children into pits and suffocated them under the dead bodies of their siblings, parents and friends. Babies had their heads bashed in with shovels, stabbed with bayonets, or smashed against trees. Often, young girls were mass raped prior to their murder. Even Nazis were horrified at the savagery Lithuanians displayed towards Jews.

The government of Lithuania rewrites murderers into rescuers. They soften the adjectives of the Holocaust calling their own barbarousness their “losses”. They mostly blame Nazis for their own crimes, just as they blamed Jews for Communism (or capitalism, or socialism, or witchcraft, or poisoning wells, or eating Christian children, internationalism, isolation, or anything else they could conjure up). Lithuanians did not “lose Jews”, they “murdered Jews”. Each time the Lithuanian Government uses the words “lost Jews” they are committing a form of Holocaust revisionism.

Calling for truth from the government of Lithuania has proven fruitless. Germain’s predecessor also called for the same truth. Lithuania ignored it then, they will ignore it again now. Many governments, organizations and individuals have voiced their staunch disapproval of Lithuania’s Holocaust deceptions, including – the International Holocaust Remembrance Alliance, the US State Department, the US Congress, Lithuania’s own Presidential Commission, Simon Wiesenthal Center, American Jewish Congress, the Lithuanian Jewish Community, the European Jewish Community, the World Jewish Congress and many more.

Currently, it appears the government of Lithuania has embargoed discussion of these Holocaust issues. Invitations to appear on internet talk shows about the Holocaust are unheeded. Invitations to attend showings of the documentaries J’Accuse! and Baltic Truth are ignored. Press requests for interviews with Foreign Ministry representatives are overlooked. The Government of Lithuania refuses to address the facts because they have been caught red-handed in their frauds and they cannot answer.

The Lithuanian government have responded to decades of the children’s continual cries by stonewalling and boycotting discussion. Instead of acknowledging the substance of the issue, their counterattacks are based on personality, distraction, substitution, delaying tactics or outright lies.

In his documentary J’Accuse!, Michael Kretzmer dissects the murders, and the Holocaust lies perpetrated by the government of Lithuania. He describes how Lithuania inverted the facts of the Holocaust and revised history. J’Accuse! speaks in the voice of the children, ending their silence from their death-pits. Kretzmer shows the extent of the government program of deception and the excruciating lack of shame by current Lithuania for their grandparents complicity in the murder of their Jews, and lack of shame for their own Holocaust denial now.

Just as Lithuania ascribes almost all Holocaust blame to Nazis, they ascribe virtually all calls for truth about Lithuanian criminality to nefarious Russian designs. At the start of the campaign to remove honors for Noreika in 2015, the government of Lithuania called these efforts a plot by “Agents of the East (Russians), Jews and other stupid people”. Many times, they have called me a Russian agent. Russia is their fallback tool to silence truth about their own Holocaust crimes. Disingenuous to be sure.

It comes, therefore, as little to no surprise that the modern Lithuanian hierarchy is panicking in its’ efforts to discredit those who refuse to perpetuate the murderer-hero fantasy. As the film J’Accuse! garners more and more awards and recognition, there cannot be doubts about the willing complicity of Lithuanians. Even in January 2023, the Government of Lithuania continues to silence the voices of the children. The Consulate of Latvia in Los Angeles intended to show Baltic Truth to their own community on February 4, 2023. The Government of Lithuania intervened to censor the showing by claiming the documentary was funded by Russia. Upon proving it was not, Lithuania claimed the filmmaker was a Russian agent. When that could not be substantiated, unknown further claims and pressure were brought upon Latvia to prevent the showing of Baltic Truth.

Despite the strongest continual efforts of the Lithuanian Government, the children’s voices are awesome in their intensity throughout the world. Michael Kretzmer’s documentary has already won “Best Documentary” awards in France, Germany, India, Macedonia, Serbia, Singapore, UK and USA, with many others awaiting adjudication in 2023. The only country where the children cannot and will not be heard is Lithuania. 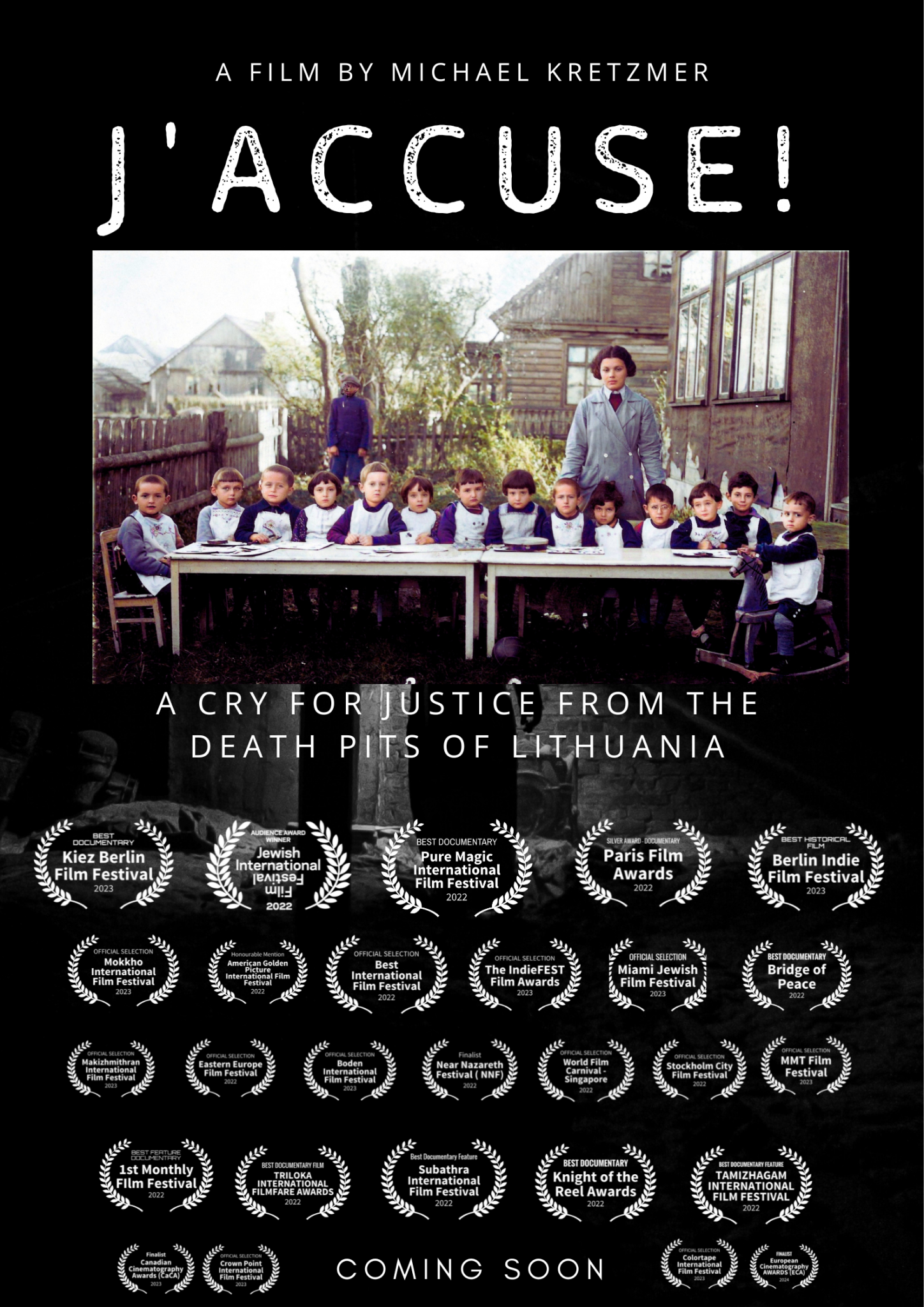 Lithuania has shown their ideology. There are no longer any grounds to believe any statements issued by the government of Lithuania. They have never previously displayed truth or sincerity, there is no reason to expect any now. We can expect only platitudes. Truth or sincerity now will merely be reactionary.

Every level of Lithuanian Government, and every one of Lithuania’s Courts is on record participating in silencing the children. They have worked so hard to silence the children’s voices, that it is now impossible for Lithuania to tell the truth without acknowledging that their courts are rigged, their government is antisemitic, and truth has no prior value in Lithuania. Truth now would be a total capitulation to their comprehensive rewriting of history. Truth now would be their own admission that Lithuania as a morally bankrupt country.

Lithuania has been hoisted by their own petard; they have no one to blame but themselves. Anything they do now is too little, too late. They have almost no path to redemption. The singular path out which might be considered truthful, sincere and redemptive would be a multi-step process:

There is nothing we Jews need from Lithuania any longer. They have exposed themselves and shown us their ethics. We have moved on and built successful lives. Lithuania’s issue is now about their own souls. The opportunity for Lithuania to tell the truth is over. We now only need the world to know the facts.

Both documentaries will go into widespread distribution in 2023. The children have bellowed from their graves, and at last, they have been heard by the civilized world.