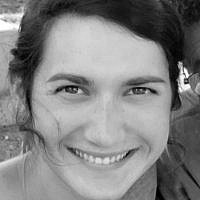 The Blogs
Hadassah Gotlieb
Apply for a Blog
Please note that the posts on The Blogs are contributed by third parties. The opinions, facts and any media content in them are presented solely by the authors, and neither The Times of Israel nor its partners assume any responsibility for them. Please contact us in case of abuse. In case of abuse,
Report this post. 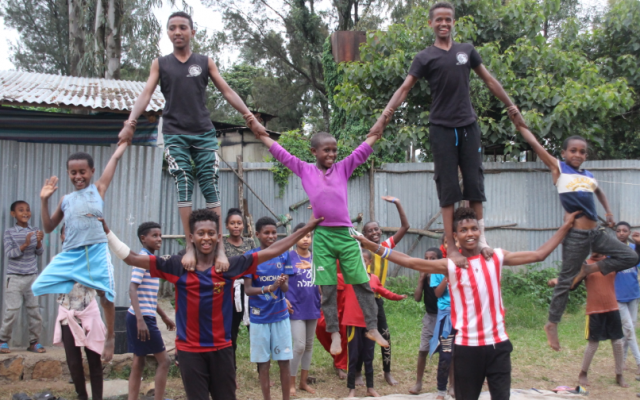 'Children of God' circus practices, smiles and all. (Gal Zeira)

On a rainy afternoon in the Jewish community of Gondar, Ethiopia, I found myself in the dusty storage room that houses the community’s circus troupe’s few treasured possessions. My arms were piled high with plastic bottles designated to join the collection as juggling props. Next to me, a bunch of boys battled with a unicycle, attempting to keep the contraption together with an intricate knot. When they seemed satisfied, they smiled and invited me to come watch their next practice that would take place the following afternoon. As a new volunteer from Israel, I had yet to be graced with an opportunity to watch the circus, rightfully named “Children of God,” perform.

The next day, I followed the sounds of music and popped my head into a large room, where I found a group of children and teenagers between the ages of 9 and 18. They were running along the periphery, barefoot on the cold stone ground made slippery from the recent rain. Two lean but strong teenagers paced the center of the room and scanned their movements like hawks. At their sharp nod, the troupe members formed a neat line leading to a limp mattress in the center of the room. One by one, they fell fluidly into complete splits or leapt into double backflips, as if with no effort at all. My amazed expression reflected in their grinning eyes as they meticulously organized themselves into balanced rows of a perfect human pyramid. They performed like a well-oiled machine, with solidarity and fervent discipline as integral components of their technique.

I gained further insight as I witnessed the implementation of a “Children of God” golden rule: if any one member stumbles or makes a mistake, the rest immediately burst into friendly applause. They chant, “It’s okay! Stand up and be strong! You’ll succeed next time!” This way, the no one ever feels ashamed. And each time, without fail, they rise like the sun, motivated to try again. The trust that tethers the circus members together gives them reason to feel safe.

The “Children of God” circus teaches more than simple acrobatics. These young people have created their own society in which they, with grave responsibility, look out for one another. It’s a miracle that considering all they’ve been through in their young lives, they still are emotionally available — so hopeful, earnest, loving and accepting. They never fail to arrive at circus practices, always radiant and eager to participate. Over the next months, I watched as they blossomed before my very eyes. Those smiles… there is nothing like them in the world.

That unique joy stands in contrast to the horrific crisis that permeates the lives of the community members. For decades, the Jews in Addis Ababa and Gondar have been living an unfulfilled dream to immigrate to the Land of Israel. They are victims of a government decision that has yet to be implemented by none other than the Israeli leadership itself. As these Ethiopian Jews wait, their existence is fraught with the pain of exile — an endless, macabre dance between hope and despair. Each family in Gondar and Addis has first degree relatives in Israel from whom they have been separated for years. Those denied entrance to Israel have been living in detrimental conditions forced upon them by local anti-Semitic policy. Many of them do not live to see Israel. And now, their circumstances are only aggravated by COVID-19, which, considering their intimate lifestyle, small living spaces and extremely limited resources, is bound to take a serious toll when it hits the community.

Who are these people? They are the remaining descendants of an ancient Jewish ancestral line that, according to tradition, made its way from the Land of Israel to Ethiopia during the First Temple period. Through the generations, they kept an authentic Jewish lifestyle and preserved their bloodline from the dangers of assimilation. However, more than a century ago, there were those that converted to Christianity under deafening duress. Even so, they were committed to keeping their Jewish tradition in secret and continued to pass onward the love of God and Israel that so deeply ran in their veins.

In the years preceding the turn of the century, many of them saw that the outside threat had subsided and the time had finally come to openly return to their Judaism and their Jewish homeland. Thousands of Jews from the scattered villages of Northern Ethiopia hastily migrated to the cities of Addis Ababa and later to Gondar, the rumored “Gates to the Holy Land,” where they would be processed and put on a plane to Israel. Their dreams of returning home were soon to be realized! They sold everything they owned in their villages, including land that belonged to their ancestors for generations, their clothes, their livestock, anything they couldn’t carry on their backs. Of course, with such short notice and under the fear of losing this long-awaited opportunity, they sold cheap, and whatever was not claimed, they simply left behind. Weeks of walking through forests and mountains, day and night, under the constant, chilling threat of bandits and wild animals around them, they risked their lives, many of them dying of hunger and disease on the way.

When they reached the city, expecting to be embraced and brought home after years of exile, they were turned away with a sharp answer from the Israeli immigration representatives, “You are not Jews. Go back to where you came from.” They refused to leave however, preferring to live as refugees in destitute conditions in Addis Ababa and Gondar, not allowing this objection to eradicate their dreams. They dared not risk missing a sudden opportunity to board a plane to their beloved homeland if it were to arise. So they stayed, in perpetual readiness, and those thousands who have not yet died are still there until this very day.

For more than 20 years, these Ethiopian Jews have been barred from entering Israel, which is their rightful homeland just as much as it is any of ours. Considering that their plight stems from unreasonable restrictions on their immigration, our apathy is inexcusable. The Jews of Ethiopia do not want favors; they want Israel. Israel does not know of the immense human resource it is missing out on. These are super-Jews, with heart and courage who live a life of relentless truth, respect and perseverance. The sparkle in their eyes reveals passion and boundless love for God and for Israel. Their extraordinarily powerful hope in the face of excruciating hardship must not be dismissed. Among the youth, dreams of drafting to the harshest of combat positions in the IDF are common. And in my heart, I know they will grow to be brave, contributing and influential citizens in Israel, if only we open our eyes and arms to them. 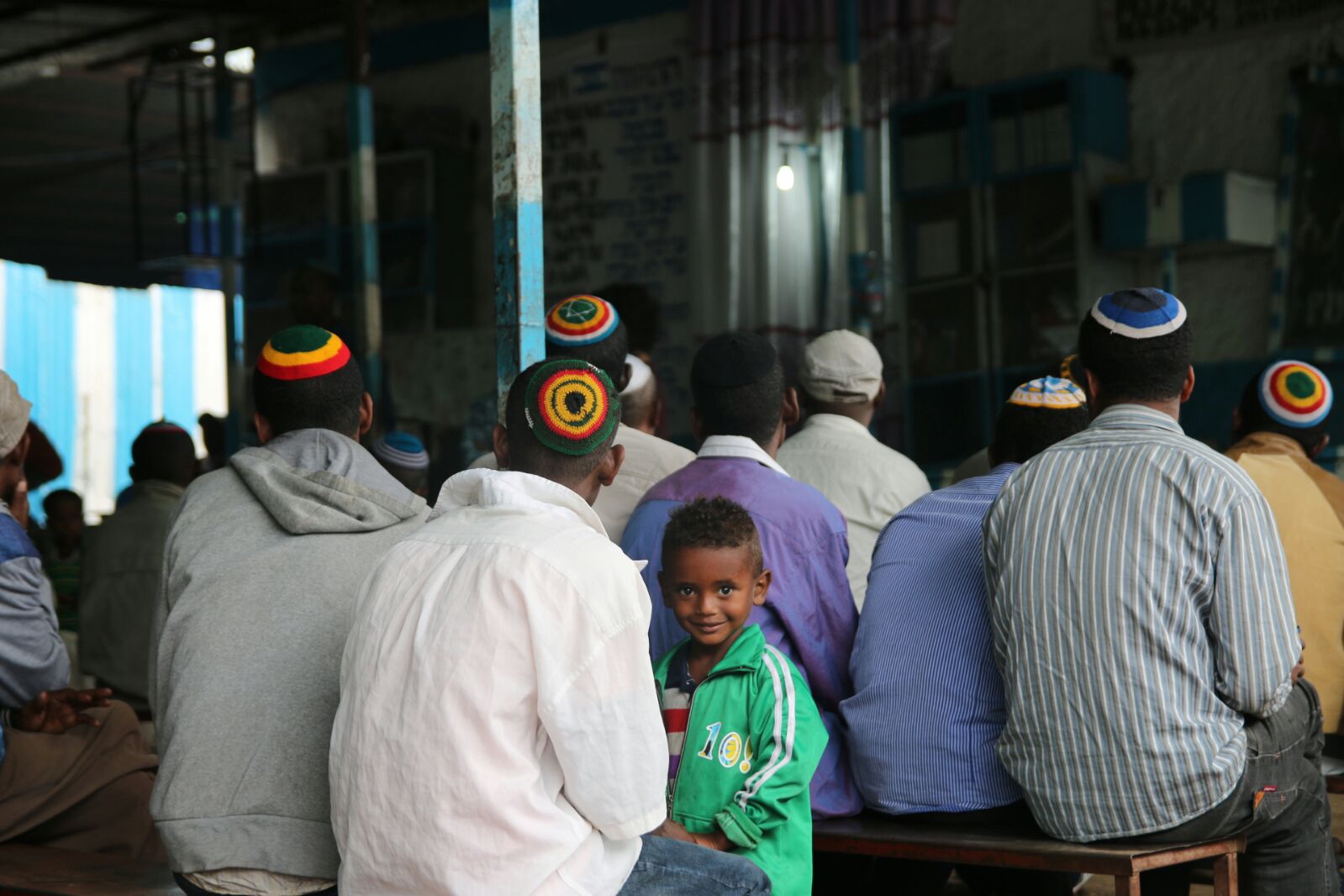 Inside the Jewish community of Gondar, Ethiopia. (Eden David)

The Jewish community of Ethiopia does not merely exist — it breathes, effervescent, a beacon of ageless beauty and humility. It serves as proof for what we believe to be the undeniable truth that lies in the long history of the Jewish people — we rise higher and grow stronger with every adversity we encounter and show the world exactly what determined survival looks like.

More than a year has passed since I first visited the Jewish community of Gondar and the joyful smiles I saw frequent my thoughts daily. Despite the challenges of existence in Israel, I know that our homeland cannot be complete until my own government opens the doors of Israel to unite these beautiful people with their brothers and sisters. When they do, the smiles of these Ethiopian Jews will make Israel brighter than ever.

About the Author
Hadassah Gotlieb made Aliyah from New Jersey twelve years ago and now lives in Neve Daniel, Israel. For several months last year, she volunteered in the Jewish community in Gonder, Ethiopia and has since been active in the struggle to bring the remaining members of the Jewish communities in Ethiopia to Israel for once and for all.
Related Topics
Related Posts
Comments