The Blogs
Mordechai Soskil
Apply for a Blog
Please note that the posts on The Blogs are contributed by third parties. The opinions, facts and any media content in them are presented solely by the authors, and neither The Times of Israel nor its partners assume any responsibility for them. Please contact us in case of abuse. In case of abuse,
Report this post. 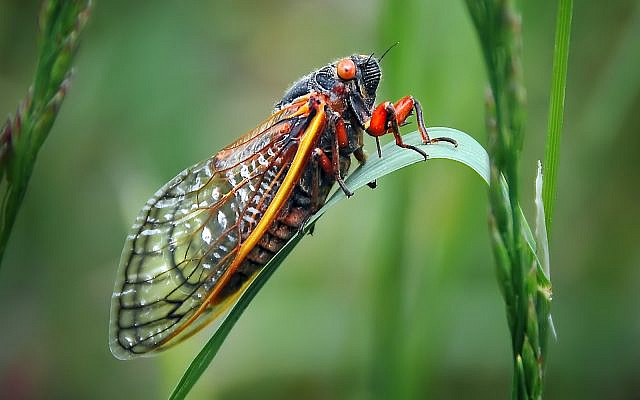 A cicada sitting on a blade of grass in western North Carolina. (WerksMedia / iStock)

This week’s Torah reading juxtaposes two seemingly unconnected mitzvos. The Torah tells us about the Nazir – a person who took a particular oath and then needed to abstain from wine, from cutting their hair, and from any contact with the dead. Right next to all the laws, sacrifices and details of the Nazir the Torah tells about the Sotah. A Sotah is a woman who was suspected of infidelity and went through a miraculous, if somewhat strange, ceremony in the Beit HaMikdash in order to prove her innocence. The Talmud offers an explanation for the juxtaposition. “Anyone who saw the Sotah in her degradation should be inspired to separate himself from wine!” That is, we realize that intoxication sometimes makes a person make choices that aught not, and seeing the Sotah in this predicament reminds us of that. And it should inspire us to maybe even take on a Nezirus oath – to withdraw from wine for a short period of time.

The main, actionable, lesson of this piece of Talmud (in our world so devoid of Sotahs and Nazirs) is that we should keep our eyes open for any circumstances that come our way so we can draw inspiration from them. Not that we are learning new lessons per se. But that we have a chance to reinforce for ourselves the things that we already know.

And that brings us to the adorable, red-eyed, soon-to-be cacophonous cicadas. In case you don’t live in Baltimore, or perhaps in case you are not reading this in 2021, you might not know that this is the year of Brood X – the 17-year cicada. There is a Bell Curve of Cicada Excitement in my neighborhood and everyone is finding a place on that metaphoric chart.

On the one end of the curve is my beloved DIL – freaked out, scared, and preemptively overwhelmed by the thought a trillion flying insects, singing cicada versions of Barry White songs and mating in the trees overhead. These people are buying beekeeper hats and making plans for having groceries delivered and other people walk their pets.

The other end of this curve is people who are excited by this amazing natural phenomenon. Like experiencing a majestic sunset or the ferocity of the ocean in a storm – it’s something to behold and be awed by. (On Shavuot, 2 ½ year old granddaughter and I went on a walk to see cicadas. I pointed out the shells and the cicadas emerging from shells, and the holes in the ground they came from, and we saw a dozen or so cicadas sitting on posts and some tall grass. Michal waved at the cicadas. “Hi ci’Cada!” she trilled. Then she waved at them and blew some kisses to the cicadas. It was an awesome moment. I hope she’s still enamored in a week.)

So let’s take a moment and think some Cicada Torah.

First, let’s say you’re walking to shul and talking to a buddy and you accidentally smoosh a cicada underfoot, with the loud and disturbing crunch reminiscent of autumn leaves and tortilla chips. Did Hashem decree that cicada would die? Or maybe it doesn’t work that way? Does the Creator’s providence (Hashgacha Pratis) extend to the squished cicada?

I know you’re know going to be shocked to learn this, but it depends who you ask. According to the Rambam (Maimonides) and those that follow him (including, surprisingly, the Ramchal) G-d’s direct providence does not extend to individual animals, only to the species as a whole. So, it was just Mr. Cicada’s dumb luck that you squished him, according to the Rambam.

But studying Torah means holding opposite truths in your mind simultaneously! The Talmud famously says that for every blade of grass there is an angle hitting it and telling it, “Grow!” Meaning, for every small aspect of nature there is great spirituality and direct providence. This is how our Chassidic brothers and sisters and how the Kabbalists among us would think.

That means, for reasons we might not comprehend, Mr. Cicada’s judgment on Rosh Hashanah was to come up to the light, come out of his shell, and meet his end with your shoe at just that moment. An infinite Creator has no limits, and the Creator’s providence contains all things. Even poor Mr. Cicada.

At this point in class about Providence and G-d’s interaction with the world, a student usually asks me what I think. Do I think the Rambam is right or the Kabbalists? Obviously, it’s not for little old me to pick sides. Some years ago I asked my rebbe what he thinks about these issues and my recollection of the conversation is that it’s basically up to you. Meaning, if a person lives life thinking that everything has meaning, that all the details of their actions are important and they seek whispers from Beyond in all that happens, and they are inspired to improve from all the little foibles in life, and they feel gratitude for all the “normal” blessings, then that is how Hashem deals with them. But if they live life like “Meh. Stuff happens,” then that is how they are dealt with. So, in fact, your little misstep with Mr. Cicada is a major inspiration to thinking about how the Creator runs our little blue rock.

As you probably know the heroes in today’s story spend 17 years underground awaiting the internal signal that the time has come. Then, if they successfully make it out of the ground and out of their little shells, they become magnificent winged creatures who fly up to the trees and sing their glorious songs of love and courtship seeking a mate. It must be so worrisome to have endured all that and finally make it into the world, and still be unsure about how to woo a Mrs. Cicada. Ho! Fear not! Hashem has given these creatures the ability to sing exactly the right tune so that despite the smallness of the cicada and the bigness of the world, they can still find The One.

This June, Wife-o and I will celebrate 27 years of marriage. Miraculously, I wooed her even though my singing sounds amazingly similar to the shrill cicada song. To me, being a spectator to the Love Festival in the Trees makes me feel grateful. Human marriage is complicated and it’s sometimes difficult. And it will come as no surprise to people that know me, I’m only moderately good at it. So the cicadas make me feel grateful that Hashem blessed me with someone to share my life with.

The other thing the cicada songs makes me think about is the Plague of Frogs. We’re not that far after Passover so everyone in class will no doubt remember that the 2nd of the 10 plagues was amphibious. Frogs were here. Frogs were there. Frogs were jumping everywhere. But what the what? If you were the Infinite Divine Ruler of Everything and these Egyptians had tortured and enslaved “Israel your firstborn,” and you wanted to prove that there was, in fact, no pantheon of gods, but only One In Charge of All, would you have come up with frogs? In my opinion, it is far and away the weirdest plague.

The Vilna Goan writes that the thing about frogs is that they make noise ALL THE TIME. They can croak away, asleep, while eating, literally all the time. The punishment of the frogs was not the yuckiness of them, but the sound of them. (He explains that the natural state of a Jew is that he is always learning Torah. Even when he eats, he eats so he has energy to learn. He sleeps so he is invigorated to learn. So eating and sleeping also “count” as learning. The Egyptians stopped our natural song of Torah with their forced labor so they were punished with the natural song of the frogs.) So hearing these cicadas can make us wonder at the miracle of that plague! How those Egyptians suffered for what they did! Thank your Hashem for your blessings.

The cicadas and their almost decades-long slumber and their “rebirth” into something glorious can make us think of the promise of a World to Come when there will be a resurrection of the dead as bodies and souls are reunited for an Ultimate Reward. The coordinated emergence of the cicadas and their “use” of a “strategy” biologists call “predatory satiation” to survive to bring another generation into the world can make us think of “kol Yisrael areivim zeh lazeh” – all Israel are responsible for each other.

The song of the cicada during these troubled times in Israel can remind us that “Hakol kol Yaakov vhayadayim ydei Eisav.” That though we need to fight when we need to fight, the real salvation of the Jewish people comes from our voice – our prayers – and not our hands or our soldiers (as beloved as they are.) This Shabbos I hope you’ll go outside, enjoy the miracle of nature Hashem has blessed us with, think some big Torah thoughts, and say, “Hi ci’Cada!”

About the Author
Rabbi Mordechai Soskil has been teaching Torah for more than 20 years. Currently he is the Director of Judaic Studies for the high school at Beth Tfiloh Dahan Community School. He is also the author of a highly regarded book on faith and hashkafa titled "Questions Obnoxious Jewish Teenagers Ask." He and his wife Allison have 6 children that range from Awesome to Fantastic. And now two precious granddaughters.
Related Topics
Related Posts
Comments