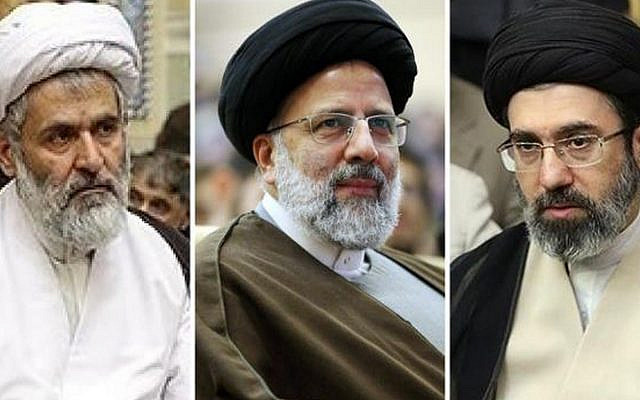 Left to Right: Hossein Taib head of the IRGC intelligence , Ebrahim Raisi, and Mojtaba Khamenei, the son of Ali Khamenei

The argument about Iran Presidential Election and 7 Candidates is not entirely persuasive or logically convincing for Iranians. Put aside the fact that most of campaigns have shaped to boycott the election entirely.

There are several flaws that under the autocratic regime of Khamenei and Shia religious octopus, preparation for the free election is an utopia. Additionally, its a joke and its very similar to a Circus.

The outlaw regime of Mullahs has blocked the way and the lack of desire among Iranians is increasingly important. Probably no one in the Europe or the USA can imagine the meaning of life under the rule of the Islamic dictatorship or the tyranny of Shia Mullahs.

It’s not clear, however, the scoop and validity of some analysis in the western media.  Most of the data are questionable because most of the active apologists in the media never explain and clarify the system candidly. The money or ransom talks for itself!

The substance of regime’s propaganda regarding election in the last days of Rouhani’s tenure is rifle with certain holes and ignored crucial assumption, and thus, not strong enough to lead to the satisfaction of the Iranian society. As well, its important to note that most of the media are under the control of so called reformist activists in Iran.

Alas, most of the Persian media outside Iran has infiltrated by pro-regime journalists that their job is advocating the controversial regime and portrait it in a good light.

Moreover, the intelligence community of Iran, try to control the public opinion globally. who wants to tell the reality of Iran? New York Times or BBC? in actuality, none of Them!

Let’s try to highlight the weak points in the Media’s report or their shaky assumptions about current situation in Iran. To illustrate the importance of understanding the logic of cruel mullahs, there are some points such as:

Even more than that, no one proclaim that Khamenei is a criminal coward Mullah with leftist mentality and radical ideology who supported terrorism from 1989 directly.

For example, the western media never try to efficiently show the reality of power system in Iran. Its inherently a matter of dispute. Sometimes they like to show a rosy picture which is too extreme to be true. None of reformists of radicals are trying to push Iranian society to democracy. Both sides like to preserve the current structure, because of benefits.

The bottom line is that, there is no evidence for the conclusion that in the current circus of Mullahs, the problems of Iranians will be solved.

Meanwhile, there is no alternative possibility to persuade the majority of Iranians to vote Mullahs once more. The people through the channels of social media, sufficiently demonstrate the reality.

Nowadays, most of the frustrated reformists inside Iran, with opposing view may argue that voting will be helpful, but this prescription does not necessary apply to the question at hand that when the problems and obstacles will be cleared!

Also, another gap is the lack of freedom which leads to shambles. one former activist in the terrorist group of FALAGH was a reformist’s candidate who is unqualified by the center of Khamenei. The reformism inside the Mullah’s system and Islamic caliphate of regime is a miserable joke!

In this coming performance of Circus, ostensibly, the main goal is preserving the regime of Mullahs! which candidates talks about the stopping of terrorism, missiles program, Nuclear activities, Anti-Semitism, enmity with the USA? the answer is clear, none!

The so called reformists or moderates only want to preserve the status quo and there is no transform the theocracy internally.

Simply put, The approval of Raisi’s candidacy is likely to strengthen his chances of an election triumph. a corrupted and blood thirty thug is supporter of anti-corruption campaign, who can believe that? but he is the preferred choice of Khamenei. This is the logic of absolutism and charlatanism.

How he can operate the political landscape in Iran? He cannot talk clearly in Persian for 5 minutes, because he has no education! only he knows the language of sword, bullet and blood, it’s the principal of all Islamic Caliphates in the Islamic history.

There will be dark days in front of Iran and its young society after this circus!

Among the all “Outposts of tyranny” [Belarus, Cuba, Iran, Myanmar, North Korea and  Zimbabwe] in the globe, Iran under the rule of Shia Mullahs is the worst! this is for Real! In the coming period, attention will be focused on the internal tension in Iran!