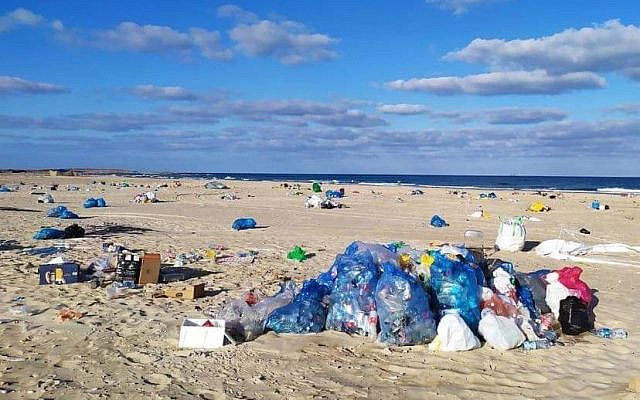 Trash on an Israeli beach, from a presentation by MK Miki Haimovich during a Knesset Interior Affairs and Environment Committee meeting on waste, June 2, 2020.

As the world’s leaders gather in Glasgow this week to set new international standards for addressing the climate crisis, last week’s report from the state comptroller here in Israel — which revealed the country’s lack of preparedness for the crisis — continues to reverberate and remind us that the “start-up nation” is far from the forefront of global efforts when it comes to the climate.

The scientific community is in agreement that it is now too late for humankind to avert the climate crisis. All that remains now is to minimize the expected damage. States that do not adapt will simply be left behind. This is the proper context in which to examine and assess the government’s new initiatives, led by the Ministries of Finance and Environmental Protection, to influence the behavior of consumers and corporations so as to reduce carbon emissions and environmental damage.

Important steps have been taken in this direction. At the initiative of Finance Minister Avigdor Liberman, the government recently adopted plans for a carbon tax, which will gradually come into effect beginning in 2023. Once the real costs to the economy of emissions and pollution are taken into account and charged to those responsible for them, this may spur companies to adopt cleaner technologies or to refrain from polluting activities. As most of Israel’s economic activity is based on exports, companies that fail to adapt will, in any case, have to pay similar taxes to the treasuries of other states. Clearly, local industry should be given time to prepare, and taxes should be imposed on products from industries in countries that do not institute similar reforms, so as not to discriminate against local production. But overall, this is a welcome advance, despite falling under the category of “new taxation.”

Another and no less important reform is the congestion charge set to be introduced in 2025, which will incentivize the use of public transport instead of private vehicles. A report published by the Israel Democracy Institute, which was prepared this year by Prof. Natan Sussman and a group of researchers, finds that “the main consumer of energy in Israel, and particularly of polluting energy from fossil fuels, is the transport sector, followed by industry.” Consequently, the report states that improving the efficiency of transport, and electrifying it, using renewable energy, can be expected to have the greatest impact on reducing emissions. Thus, it is essential that government policy will ensure maximum availability of transport solutions and will promote urban planning that encourages walking and using bicycles, alongside financial disincentives for private car use.

In this context, the purchasing tax on disposable tableware containing plastic has attracted criticism due to its disproportionate impact on families from lower socioeconomic brackets, who are more likely to use paper and plastic tableware. It is important to note that this is not a tax created to extract more resources from struggling families, but an economic incentive designed to change behaviors and purchasing patterns. Israel is a small, crowded, and polluted country, exceptionally so relative to the rest of the world. If current trends are not changed, this situation will only deteriorate until life in public spaces becomes unbearable. Around 90 percent of pollution on Israel’s beaches comes from plastic waste. Thus, instead of using a hard regulation approach and banning sales outright, it is perfectly reasonable to apply the principle of making the polluters pay the real costs of the results of their actions.

Unlike the COVID-19 pandemic, which arrived suddenly and brought the entire world to a halt, the climate crisis is here to stay. This is a real and threatening crisis that demands significant changes in public behavior, the economy, and public policy. It is true that some of the steps needed may have an unequal impact on different segments of the population, and that the more vulnerable groups may suffer in the short term. But this suffering can be mitigated by complementary policy actions.

The climate crisis is also an opportunity, and by taking the right actions we can foster growth and create jobs of the future that will raise employment rates. By the same token, failing to act methodically against the crisis will result in even greater damage to the entire population, and particularly to the most vulnerable. The early policy decisions taken in this area are the first steps in the right direction, placing us on a path that will support low-carbon and sustainable economic growth.