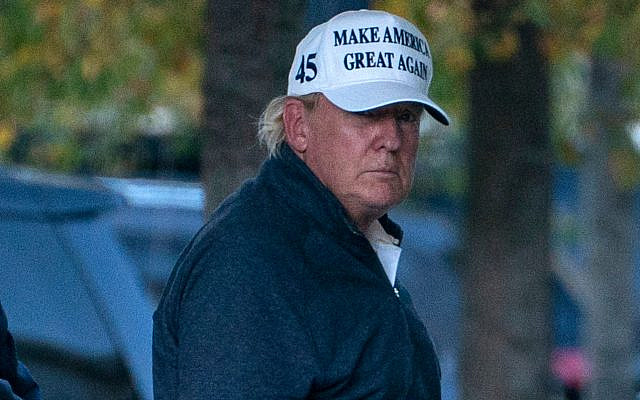 President Donald Trump on November 7, 2020, upon returning from a golf game during which he learned that Joe Biden had been announced the winner of the election (credit: NIMA / Wikimedia Commons).

The Donald Trump presidency is ending the same way that it has proceeded every day since he was elected, by feeding Trump’s fragile ego while not tending to the needs of Americans. He pursues his fantasy of overturning an election that he lost by a wide margin while the U.S.’s Covid crisis worsens every day.

William Kristol, former chief of staff of Republican Vice President Dan Quayle described Trump’s response to the election as, “A little coup, a lot of con, and a total and reckless disregard for the health of our democracy or country”.

For four years, Trump has been obsessed with his personal image. He seems to have never understood that the presidency is not about the individual who is temporarily holding the position but about the country and the citizens and he represents.

In the 2016 election, he was obsessed with the fact that he lost the popular vote to Hillary Clinton by 2.1%, and he falsely blamed it on voter fraud, including his false claim that millions of people voted illegally.

Throughout his presidency, Trump has attacked the media whenever the facts that they reported did not reflect favorably on him. His most consistent targets were centrist or left-leaning media, but he also attacked the right-leaning Fox News whenever it was not as completely subservient as he demanded.

Leading into the 2020 election, he warned repeatedly that the only way he would lose the election was if the election was rigged. As was reported on ABC News, “Trump has longstanding history of calling elections ‘rigged’ if he doesn’t like the results”, starting well before he became a candidate.

For four years, Trump has repeatedly assaulted America’s democratic institutions in an attempt to bring them to their knees so that they could better serve his individual purposes.

In his last few weeks in office, his assaults on those institutions have only intensified. He also intensified his efforts to rid the U.S. government of anyone who does not fully submit to his every whim, including Secretary of Defense Mark Esper and the highly respected director of the Homeland Security agency, Christopher Krebs.

Trump conned many people over the years, especially his supporters, half of whom now believe his fabricated claims of election fraud and continue to contribute to his campaign. According to the Washington Post, the Trump campaign “is raising money off false assertions that have apparently helped it pay down its outstanding debt and will help finance the leadership PAC that could allow Trump to retain influence in the Republican Party even after leaving office”.

Trump’s assaults on democracy are likely to leave long-lasting scars because they have reduced trust in America’s democratic institutions, both among Republicans who believe his claims that he was the victim of election fraud and among Democrats who are angered that the system allows him to make outrageous claims and hold up the transition process.

But despite all his bluster, Trump will never be back as president after January 20, 2021. Not only is he unlikely to be healthy enough to run again, but it is also unlikely that the Republican party will allow a Trump candidacy to occur again.

Trump now has the label of loser attached to him. He is only the eleventh U.S. president to seek a second term and fail, and he did more poorly in this election than even his own party. While Trump lost both the electoral college and the popular vote by a wide margin (306 versus 232, and 51% versus 47.2%), the Republican party increased its number of seats in the House and prevented the Democrats from gaining a majority in the Senate.

Trump is now clearly a drain on his party. The New Yorker reported that “a leading Republican pollster, who worked with a number of the party’s candidates this election and asked not to be named” speculated that the best outcome for the Republicans would be if Trump ends up “dead or in jail”. Even while he is still president, Republicans are increasingly expressing their disagreement with Trump openly.