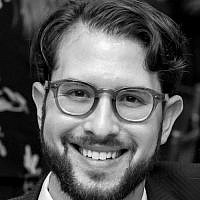 The Blogs
Alec R. Ewig
Apply for a Blog
Please note that the posts on The Blogs are contributed by third parties. The opinions, facts and any media content in them are presented solely by the authors, and neither The Times of Israel nor its partners assume any responsibility for them. Please contact us in case of abuse. In case of abuse,
Report this post.

The Israeli-Palestinian conflict, by virtue of its name, appears to have two sides. Anyone who’s studied the conflict knows it’s more complicated than that. On campuses across the US, where the issue can be an extremely contentious topic, it can be said to have 4 sides. On one are folks like Ken Stern, author of The Conflict Over The Conflict: The Israel/Palestine Campus Debate, and organizations like OneVoice, where I worked as a Regional Organizer, who believe that through discussion, negotiation, and compromise, the conflict can end through a permanent solution. To them, essential liberal values like free speech, reverence of the truth over “fake news,” academic freedom, and opposition to racist bigotry are not only essential in their own right; they’re also important tools to bring about a peaceful and just end of the conflict.

But on two other sides are folks with a far less complex understanding of the conflict. From the point of view of some pro-Israel and pro-Palestine activists, the conflict is nothing less than a zero-sum war of survival. From the hardcore pro-Israel lens, pro-Palestinian activism is simply another attempt in the 2,000+ year long history of anti-Semitic forces to crush Jewish self-determination, rendering them weak and at the mercy of a hostile majority. These forces, knowingly or not, are trying to create conditions that could easily lead to a second Holocaust. Why, then, should their rights of free speech, anonymity, and academic freedom be respected?

And from the staunchly pro-Palestinian view, this conflict is yet another example of a white supremacist settler-colonial state trying to wipe out an indigenous population. Since colonialism has been defeated before, and since Israel has and is continuing to engage in a slow genocide against the Palestinian people, why shouldn’t Palestinian activists use any means necessary, illiberal or otherwise, to fight back against the oppressor and level a blow against an apartheid state?

Ken Stern deftly navigates challenging waters on this deeply contentious topic, one where even a topic as simple as adherence to the truth over lies is debatable. “This isn’t about fairness,” he quotes a right-wing Zionist as saying. “We’re in a war. We have to keep on the attack.” If this is indeed a war for survival, where even the truth is an enemy if the outcome could lead to annihilation, might the Israeli-Palestinian conflict prove to be the issue where liberal values go to die?

The attempts to shut down and destroy activists, events, and discussion groups seen as helping the enemy creates the fourth, and almost certainly largest group in this conflict: the people who are terrified of being called an anti-Semite or a racist apartheid supporter for expressing the “wrong” opinion. The situation has gotten so extreme that they prefer to stay silent, purposely keeping themselves ignorant of such toxicity rather than deal with the grim experience of daring to care.

We end up with a political wasteland, where proponents of one side will insist that norms of free discussion be respected when it’s their turn to speak, but will cheer on attempts to shut down their opponents. Ken, a genuine advocate for free expression on college campuses, is harshly critical of any attempts by Israeli or Palestinian advocates to trample over the freedoms of the other. Ken’s perspective stems from his youth as a young, left-leaning lawyer. He repeatedly tried to get pro-Palestinian organization to view the conflict with more nuance, and pro-Israel/mainstream Jewish organizations to be willing condemn and criticize some of the most malicious actions perpetrated by the state of Israel. Overwhelmingly, his pleas were rejected. In both cases, the argument was the same: “What you’re saying has some merit, but supporting our side in the conflict comes first, and we won’t do anything that might weaken it.”

This is a recurring theme in the book. As a director at the American Jewish Committee (AJC), Ken repeatedly tried to push the AJC to issue less one-sided and more nuanced takes on the conflict. And time and time again, just as it looked like the AJC might be willing to take a stand that wasn’t resolutely in Israel’s corner, donors would threaten to withhold money and the leadership would give in.

Even worse, from Ken’s point of view, are the attempts by organizations to bully opponents into silence and submission. These actions frequently target Palestinian and Muslim students, causing them to feel justifiably persecuted on campus for their identity and beliefs. On the pro-Israel side, Ken singles out powerful organizations such as the Canary Mission, which publishes information about college pro-Palestinian activists in an attempt to make it harder for them to find jobs outside of college. Ken believes that these “take no prisoners” style tactics have ironically lead to even worse results for pro-Israel advocates, and he brings in some examples to bolster his case. One involves a campus vote on endorsing the pro-Palestinian Boycott, Divestment, and Sanctions (BDS) movement. Because campus leaders were afraid of being harassed by organizations like the Canary Mission, they decided to hold the vote in secret. The measure narrowly passed. Ken believes that if it were a public vote, and the students felt they had nothing to fear by voting either way, it would have failed.

But here’s where we see the vicious cycle start to emerge. BDS victories on campuses will cause mainstream pro-Israel organizations to panic. In a desire to stop the spread of anti-Israel sentiment on campus, they’ll try to clamp down on it with increasingly harsh tactics. These tactics will lead to a more radical response from pro-Palestinian campus organizations—thus, the cycle continues.

Indeed, the pro-Palestinian responses to pro-Israel activities on campuses are also concerning to Ken. He points specifically to the 2001 Durban Conference as a space that legitimized an animus against Israel that frequently veered into anti-Semitism. He points out that hardcore anti-Israel and anti-Semitic incidents on campuses are relatively rare, all things considered. Yet where they exist, they can lead to a state of fear for Jewish students on campus, chilling their speech, especially when it comes to Israel.

For the pro-Israel extremists, how does one convince an organization not to bully pro-Palestinian students and take a more nuanced view of the conflict when many of their major donors are vehemently opposed to that? For the pro-Palestinian extremists, how does one convince students of an organization dedicated to anti-normalization with Zionist student groups and that sees deplatforming as a moral cause to consider sitting down with students with a different point of view and learning more about the perspective of the other side?

Ken discusses a potential solution: simulations that force students to play-act leaders and organizations from all sides of the conflict. The point of these simulations isn’t to turn an anti-Zionist into a Zionist or make a pro-Israel student support BDS. Rather, it’s to engender empathy and understanding for why someone might have a different take on the conflict and where they’re coming from. At OneVoice, we’ve been sharing the perspectives of ordinary Israelis and Palestinians, from farmers to activists, in our podcast Everyday Voices. We use their stories to start a conversation with American students about how the conflict impacts people in their day-to-day lives.

All across America, we’re seeing an increasing sense of atomization and balkanization of individuals based on their political beliefs that stretches far beyond just the Israeli-Palestinian conflict. On one hand this makes sense – how can you ask someone to become friends with a person who holds political views that delegitimize and threaten them? But at the same time, it’s unclear if this leads to tangibly better outcomes for anyone involved in these turf wars. In The Conflict Over The Conflict: The Israel/Palestine Campus Debate, Ken explores the challenges and nuances of this complex issue in great detail. I would highly recommend it for anyone interested in how to try to heal these great political rifts.

Alec Ewig lives in Queens and is an Analyst at the Lubetzky Family Foundation. Prior to that, he was a Regional Organizer at the OneVoice Movement.

About the Author
Alec Ewig lives in Queens, New York and is an Analyst at the Lubetzky Family Foundation. Prior to that, he was a Regional Organizer at the OneVoice Movement.
Related Topics
Related Posts
Comments