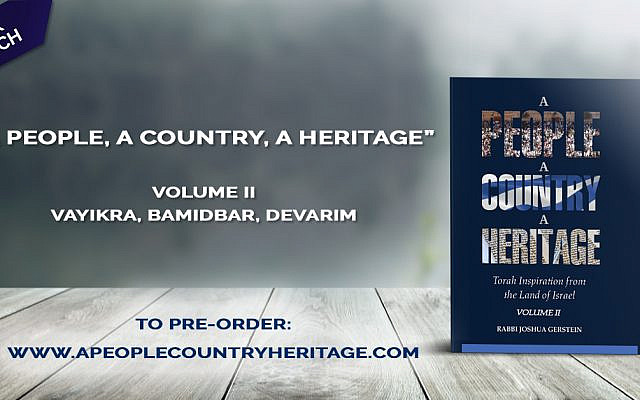 A People A Country A Heritage Volume II

The Torah portion of Shelach recounts the tragic episode of the Jewish people’s scouting mission to the Land of Israel, and the subsequent punishment for their negative report. The verses state:

The Lord spoke to Moses saying, “Send out for yourself men who will scout (וְיָתֻרוּ) the Land of Canaan, which I am giving to the children of Israel. You shall send one man each for his father’s tribe; each one shall be a chieftain in their midst.( Bamidbar 13:1-2) …I, God have spoken, I will do this to the entire evil congregation who have assembled against me. They will meet their end in this desert, and they will die there…(Bamidbar 14:35) So the men who produced a bad report about the Land died in the plague before God.( Bamidbar 14:37)

Two main questions arise while studying this tragic yet important chapter in Jewish history: Firstly, why the necessity to organize such a scouting mission in the first place? Did God not promise His people that He would lead them to a land “flowing with milk and honey?” Furthermore, what was the nature of the sin of the negative report that warranted such severe retribution?

Before we can begin to discover the answers to these questions, it is first vital to understand the context of the unique connection between the Jewish people and the Land of Israel. In the work Reflections of the Rav, Rav Soloveitchik explains this unbreakable bond as follows:

The union of the people of Israel with the land of Israel is comparable to a marriage. The crossing of the Jordan River involved more than a geographic movement; it represented a marriage between the people and the land, a union of rocky hills and sandy trails with the people whose future destiny is to this day bound up with the state and welfare of the land. Destinies were united, a joint sharing of honors and shame, victory and defeat; for all that transpires there affects the mood and status of Jews everywhere. In a human marriage, divorce or death can sever the relationship. The bond between the land and people, however, is for all time…( Reflections of the Rav Volume 1 pg. 120-121)

According to Rav Soloveitchik, the people of Israel and the Land of Israel are not simply a nation and homeland, rather they are as intimately connected as a man to his beloved.

Further on this idea, Rav Soloveitchik provides a most insightful explanation as to the Jewish concept of marriage which so perfectly encapsulates the reasoning and necessity of the scouting mission to the Land of Israel. He writes:

Marriage is not a utilitarian transaction, a partnership agreement, a casual relationship. It is an existential commitment, a uniting of two lonely, incomplete souls to share a common destiny with its joys and sorrows. It is not an association but an integration. Such a commitment cannot be based on transmitted data; what is involved concerns one’s body and soul, the inner personality finding itself attuned to another. It is a metaphysical fusion. Such a commitment, if it is to be wholehearted, without reservations, and for all time, can only be derived from first-hand knowledge…( Ibid. pg. 121-22)

Just as in a halachik marriage there must be a face-to-face meeting between man and woman in order to solidify the commitment of two souls prior to their union, so too the Jewish people needed to meet the Land of Israel before entering into a “marriage” with their homeland.
By entering the land, the people were being wedded to it and therefore despite the Divine assurances of its quality, they had to experience it through their princes before the commitment could be deeply rooted and irrevocably assumed.( Ibid.)

This then is the key to answering our first question posited above. The necessity of the scouting mission was not because the Jewish people did not believe God’s promise per se, but rather the purpose of the mission was to begin the process of acquaintance with the Land and to establish the beginnings of an everlasting relationship. Furthermore, this deeper understanding of the function of the scouts also helps explain the nature of the matters missioned to them by Moses:

You shall see what [kind of] land it is…And what of the land they inhabit? Is it good or bad…What is the soil like? Is it fat or lean? Are there any trees? You shall be courageous and take from the fruit of the land.” It was the season when the first grapes begin to ripen. ( Bamidbar 13:18-20)

These were not inquiries for the purpose of assessing military topography or strategic advantage. The focus here was to encourage the blossoming of the first seeds of a fragile relationship, to discover the qualities and nature of the land itself – in essence, to become acquainted with her character. Such a journey of discovery was the first step in establishing a deeper connection that would span millennia and shape a national destiny.

Within this newfound context, there is revealed a new dimension to the sin of the scouts and the severity of their punishment. Indeed, their negative report in many ways “clipped the wings” of the young and fragile bond between the people and the Land. Upon their return, they declared to the masses:

…the people who inhabit the land are mighty, and the cities are extremely huge and fortified, and there we saw even the offspring of the giant. But the men who went up with him said, “We are unable to go up against the people, for they are stronger than we. ( Bamidbar 13:28, 31)

They focused solely on the material challenges and lost sight of the higher purpose of their journey. As Rav Soloveitchik eloquently states:

“With grandeur looking down on them, all they could see was the mundane.”( Reflections of the Rav Volume 1 pg.123)

Instead of fostering the first seeds of an eternal relationship between nation and homeland, the Scouts’ report planted seeds of doubt and distrust within the minds and hearts of the people.

The punishment, therefore, was not overly severe but rather was a natural consequence of the entire tragic episode. The wandering years of exile in the desert witnessed the deaths of every man between the ages of 20-60 of the Scouts’ generation. It ushered in a new era, a younger generation who had not been unduly influenced or tainted by the negative report of the Scouts. This generation was wholly more fitting to “wed” the Land — they were able to recognize the inherent beauty within it and were able to foster a pure, timeless relationship with the Land of Israel.

In our times, with the renewed settlement of the Jewish people in the Land of Israel we have the unique opportunity to repair and correct this ancient sin of the Scouts. To accomplish this task, it is befitting to internalize and follow an important guideline for healthy and happy marriage set out by prominent psychologist Dr. Wendy Mogel. She writes:

“The best way to keep marriage from being too hard is not to believe for a second that it’s easy. Take time, act wisely, guard your words, get help before you need it: You write the ending.”(jewishjournal.com)

This insight is equally applicable to the Jewish people’s relationship with the Land of Israel today. Living in the land has its fair share of joys and sorrows, bursts of excitement as well as the dull monotony of everyday living. It’s imperative to understand that “the best way to keep living in the Land from being too hard is not to believe for a second that it’s easy.” Similarly, like marriage, appreciating the grandeur and significance of the Land of Israel will mature with time, will require thoughtful intuition, and can best be navigated with guidance. Thankfully, in our generation, we have the opportunity to write a most happy and fulfilling final chapter of this story.

About the Author
The Author is a Jerusalem based Rabbi and Jewish Educator. He is a Lieutenant in the IDF reserves where he serves as a battalion Rabbi, and is the author of the book "A People, A Country, A Heritage-Torah Inspiration from the Land of Israel."
Related Topics
Related Posts
Comments