The Blogs
Michael Arizanti
Apply for a Blog
Advertisement
Please note that the posts on The Blogs are contributed by third parties. The opinions, facts and any media content in them are presented solely by the authors, and neither The Times of Israel nor its partners assume any responsibility for them. Please contact us in case of abuse. In case of abuse,
Report this post.
Embed from Getty Images

Top officials in the Kurdistan Region warned in October 2019 that the world’s governments still need to use as much vigilance as ever in facing the remnants of the Islamic State despite the US announcement earlier in the day that the group’s leader, Abu Bakr al-Baghdadi, had been killed the night before during a military operation in the northern Syrian province of Idlib.

The officials are absolutely right, and this is specially important for nations like Kurdistan and Israel during our period of time.

We might be dealing with more potential threats post-coronavirus, than we might think. This can specially be seen in IS Telegram channels- were the daesh propaganda are playing on the emotions on radicalized people, and this might be something that will make them tilt towards terrorism due to the religious ideology of daesh. It is also a reason for that ISIS at the moment pores over religious texts: 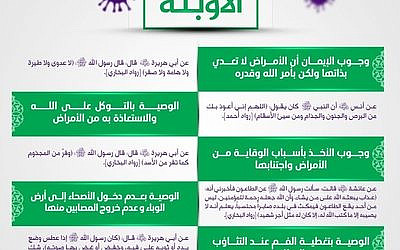 This is about religious belief of ‘end of times’ being attached with the virus, and IS think they have to prepare themselves.

“The international community must be aware that the death of the ISIS leader Baghdadi is not necessarily the end of ISIS. Every concerned party needs to be alert and continue with their coordination in the fight against terrorism and of ending it.”

“The risk of an ISIS reemergence still exist and the groups’ activity in the area is increasing and still poses a threat to the region and the world,” he continued. “That is why the international community needs to continue their cooperation and coordination in order to cut off its terrorist ideology.”

This places extra responsibility on mosques. Mosques must do more to combat totalitarian and violent interpretive traditions, especially now during the ongoing epidemic. If religious leaders do not condemn and distance themselves from violent Islamism, there is a risk that young people will be attracted and recruited to a greater extent than before.

This is especially important now that people have more time now to surf extremist content online, which has never been so easy to find before.

To fight violent Islamism, sectarian interpretation traditions needs to be fought or at least debated. Imams have a great responsibility to deal with theology of daesh. It is a responsibility that rests on all imams and Muslim leaders around the world. Specifically the imams and Muslims leaders in regions extra vulnerable to Islamism such as Kurdistan and Israel.

The Arab League member states should demand from Muslim associations and organisations that they clearly and distinctly refrain from religious totalitarianism and violent extremism, as some have done in the past. That also includes more measures to fight the ideology of the Muslim Brotherhood in the region. These groups operate with a very aggressive expansionist mindset that wants to rule over more lands, more resources and more authority for their own agenda. Countries and regions such as Kurdistan and the United Arab Emirates have, to a great extent, succeeded in creating tolerant societies, where people can live in peace and coexistence regardless of ethnicity or religious affiliation. That makes them extra vulnerable to totalitarian imperialistic Islamist states and groups.

Here, Israel should seek cooperation with the member states of the Arab League, which have already classified IS and the Muslim Brotherhood as terrorist organizations, to fight their common enemy. Israel should also help Kurdistan to a greater extent here with intelligence, military and humanitarian support.

The Arab League should create a strategy to counter the theological and religious arguments used by ISIS to legitimize its crimes against humanity. It is imperative that the Arab world mosques make efforts to fight totalitarian and violent interpretive traditions. Muslim communities must engage in the fight against religious sectarianism and fanaticism. This is especially important now during the corona epidemic, which IS already extensively uses to radicalize and capture new members.

About the Author
Michael Arizanti is a debater born in the Netherlands, raised in Norway but now living in Sweden. In Sweden he has been an important part of the debate on how to deal with violence-promoting extremism, and how to fight honor-related violence and oppression. Nowadays he has more focus on human rights and the Kurdish issue.
Related Topics
Related Posts
Michael Arizanti
Comments