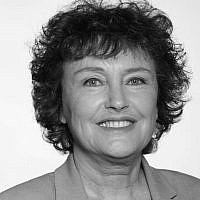 The Blogs
Karnit Flug
Apply for a Blog
Please note that the posts on The Blogs are contributed by third parties. The opinions, facts and any media content in them are presented solely by the authors, and neither The Times of Israel nor its partners assume any responsibility for them. Please contact us in case of abuse. In case of abuse,
Report this post.

The outbreak of the COVID-19 pandemic, and the measures taken by governments around the globe in an attempt to contain its spread, are dragging the world into a rapidly evolving economic crisis. A global recession seems inevitable, but its depth and duration are highly uncertain. The latter will depend on the evolution of the disease, on the severity and duration of the restrictive measures imposed, and on the nature and magnitude of the economic policy response.

In this respect, Israel is no exception. The first restrictive measures taken by the Israeli authorities — restrictions on travelers from China were put into effect as early the beginning of February and from some other Asian countries — in February 17, 2020. Israel’s “insular” nature (due to security considerations) allowed it to effectively close its borders. The measures escalated rapidly and by mid –March, all international travel came to a halt; all travelers were subject to 14-day quarantine, and persons exposed to the virus or persons that had had any contact with carriers of the virus, were also quarantined. In addition, schools were shut down, and all restaurants, theaters, and museums were closed. Most retail commerce was also shut down, and businesses began to operate with only 30% of workers on their premises. No gatherings were allowed, and the entire population has been instructed to stay at home except for those going to necessary work or needing to run necessary errands.

The economic consequences of the partial shutdown of the country, together with the sharp decline in the value of all financial assets and — as a result — the drop in private consumption and investment are dire; they will become even more devastating if this shutdown lasts for more than a month or two. The number of unemployed is expected to jump from some 157,000 in 2019 to about half a million and the numbers of those eligible for unemployment benefits will jump from 75,000 to about 500,000. The severity of the recession will depend on the duration of these severe measures and on the policy response by the authorities.

It should be stressed that the Israeli economy entered this crisis in a relatively solid and resilient state: growth was reasonable since the GFC (Global Financial Crisis), the unemployment rate was at a record low and the employment rate was at a record high. Israel also has a surplus in the current account of the balance of payments; large foreign exchange reserves; its public debt — at 60% of GDP – is relatively low, and its banking system is resilient, with large cushions of capital and liquidity accumulated in the years since the GFC. If a crisis is forced on you, you’re better off entering it from a strong starting point. It is also important to point out that the Israeli economy and public is experienced in coping with various types of shocks.

The initial restrictive steps seemed effective in slowing down the spread of the virus. However, as the restrictions become more severe, the tradeoff between pure public health considerations regarding the measures, and their economic costs, is becoming a more and more important question to consider.

There are some lessons to be learned from the experience gained from previous crises, but we should also be aware of the differences between those episodes and the current crisis. The 2008 crisis — the GFC — was the result of a financial crisis with its e epicenter being the US financial system. The main concern at the time was that this crisis would destabilize Israeli financial institutions. Thus, the main policy tools to deal with the crisis were in the hands of the Bank of Israel, which acted decisively and forcefully. Then, as now, Israel was in the midst of a political crisis, and the budget was limited to a monthly spending of 1/12 of the previous year’s budget. This means that there was no budgetary stimulus beyond the automatic stabilizers (i.e., the decline in tax revenue due to the lower activity resulting in higher deficit). In retrospect, this was not a serious obstacle, since the severity of the economic slowdown in Israel was mild, and it lasted only two quarters. By the second quarter of 2009, the Israeli economy was well on its way to recovery. In many other countries, which experienced a more severe economic decline, governments introduced large fiscal packages to mitigate the negative effects on the economy and support economic recovery.

In Israel, in cases in which a crisis originated from domestic shocks, such as the Second Lebanon war or military operations in Gaza, tourism and air transportation were the first to be affected, as in the current crisis. Experience shows that it takes about a year for the number of tourists to bounce back to the pre-crisis level. In previous events, domestic tourists tended to increase their occupancy of domestic hotels in times of tense security situations, thus mitigating the negative effects of the drop in the numbers of foreign tourists.

All these measures are in the right direction and will help mitigate the initial effect of the crisis on those most severely impacted by it.

However, it is important to stress that due to the political deadlock, the government’s hands are tied with regard to implementing an expansionary fiscal policy, as it is operating under a very restrictive budget of 1/12 of the 2019 budget. This budget necessitates severe cuts on the flexible components of the budget, those allocated to areas such as health, education, welfare, and investments in infrastructure, even before the COVID-crisis. With the outbreak of the economic crisis, this budget is totally inadequate. It implies a pro-cyclical fiscal policy which will amplify the crisis, rather than an anti-cyclical fiscal policy which would mitigate its effects. This will also be a crucial factor at the recovery stage: large government budget allocations to growth-enhancing projects will support a stronger and speedier recovery.

I do hope that in light of this unprecedented health and economic crisis, the politicians will find a way to join hands to help Israel both endure and recover from the crisis.

About the Author
Prof. Karnit Flug is vice president for research at the Israel Democracy Institute, a lecturer in the Economics department at the Hebrew University of Jerusalem, and a former governor of the Bank of Israel. Before that, she served as director of the Research Department of the Bank of Israel and as an economist at the International Monetary Fund. Her fields of expertise include the Israeli economy, macroeconomics, monetary policy, and the labor market.
Related Topics
Related Posts
Comments