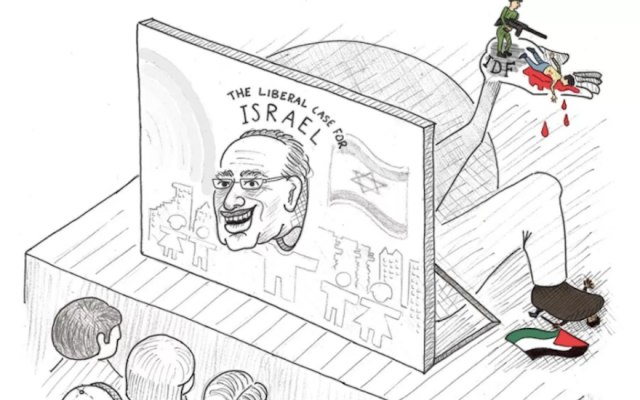 Three weeks ago, Professor Alan Dershowitz gave a speech at the University of California-Berkeley in which he laid out the liberal case for Israel. Shortly thereafter, a cartoon appeared in the student newspaper, the Daily Californian, that depicted Professor Dershowitz with spider-like features smiling as he sticks his head through a cardboard cutout. Behind the cardboard he is stomping on a Palestinian child with his foot. In his hand is an Israeli soldier who is shooting an unarmed Palestinian.

The entire incident begs the obvious question. Where was the Jewish faculty at Berkeley? Why were they so willing to put up with this appalling pictorial representation without public objection? What would their reaction have been had a similarly offensive cartoon been published depicting Hispanics, African Americans or Muslims?

We’ve had a front row seat to that sort of activity at my alma mater, the University of Pennsylvania. In August, a professor authored an op-ed piece in the Philadelphia Inquirer that some considered offensive and racist. Within a day, many Penn professors and students, including many Jewish professors, organized against her. Clearly, Jewish professors know how to get agitated about perceived bias against other peoples and cultures.

But what of our own? It is now common on campus for university-affiliated organizations to advocate anti-Semitism publicly. Rarely is it as obvious as at Berkeley, and usually it is disguised as “anti-Zionism”. Curiously however, those same people who wrap themselves in the flag of multi-culturalism and tolerance seem to focus their outrage only on Israel. Millions can get displaced and purposely starved in Syria, Christians can be persecuted throughout Arab lands, Kurds can be denied independence by at least four nations, but only Israel will be singled out for condemnation on campus and by international agencies like UNESCO.

Take for example an organization which has chapters at numerous law schools, the National Lawyers Guild. When I was at Penn Law School in the early 1980’s, the NLG was a respected liberal organization. While too leftist for me, I respected the Guild’s work and the people who believed in it. What a difference 30 years makes. In 2014, the NLG sought to indict President Barrack Obama before the International Criminal Court for “aiding and abetting Israeli genocide, crimes against humanity and other war crimes.” What was President Obama’s great sin? He provided assistance to Israel during the 2014 Gaza conflict, including money to fund Israeli development of the “Iron Dome” missile defense shield. To the NLG, protecting Jewish civilians against indiscriminate Palestinian rocket fire was an example of “genocide”.

One might think that when these incidents happen, when the Jewish state alone is accused of such crimes or is targeted separately by the NLG, the Boycott, Divestment and Sanction regime or other organizations, Jewish professors across the political spectrum and non-Jewish Israel-friendly faculty members would object and make their voices heard. One would be wrong. Their silence has been deafening, to say nothing of cowardly. Only Professor Dershowitz seems to care about publicly challenging the all-enveloping politically correct orthodoxy that isolates Israel as the epitome of evil.

May I ask where are the rest of them? Where are the Jewish professors — and most prominently the Jewish Studies professors — at schools where anti-Semitism (both blatant and dressed up as anti-Zionism) now practically is an accepted fact of life, such as Berkeley, San Francisco State or Portland State? If they object at all, they do it awfully quietly. Either the professors are unaware of or unwilling to face the fact that their silence produces the oxygen that fuels the campus radicals who twist the liberal concepts the professors adore into an unrecognizable force they should fear, were they prescient enough to see it.

Given Jewish history and tradition, it’s not that surprising that Jewish intellectuals tend to be liberal. One of the most sacred principles of Judaism is Tikkun Olam (“Repairing the World”). Liberalism generally has taken a more active approach toward this than conservatism. What is surprising, and profoundly disturbing, is that as liberalism has morphed into progressivism, and much of progressivism has blurred into anti-Semitism, those Jews who are closest to the intellectual center, our Jewish academics, have closed their eyes to the danger. Any pushback is begrudging at best.

Have you ever heard a Jewish academic defend Israel during those rare occasions when one actually does so? Almost always it begins.. ”While I don’t agree with Israel’s settlement policies…” That’s not support, it’s an apology.

When was the last time a Jewish academic said in a straight-forward fashion “I support Israel because it is a truly good and decent country?” How about “Israel is the one place in the Middle East where people of all religions can worship freely and where even some committed to the State’s destruction can speak in the Parliament. It’s a country where gay people remain a part of society and where enemy combatants and civilians from wars in which Israel has no part are treated and cared for in Israeli hospitals?”

I’m well aware of Israel’s myriad faults and of the depth of feeling about the Palestinian situation, as well as the complexities of the Israeli/Arab conflict. There is no bright line answer, and no one can claim full virtue. If our brilliant Jewish academics don’t like Israel’s settlement policies well guess what, neither do I. But as people supposedly trained in critical analysis, how are they so prepared to place the entirety of the blame on Israel? Why are they willing to absolve the Arabs for their part in the Palestinian mess? Why are these professors so reticent to challenge claims of “victimization” by the Palestinians despite innumerable chances to become otherwise? Most importantly, why are our academics so willing to let Israel’s problems nullify its accomplishments?

If our academics feel they cannot support Israel because of its settlement policies, dare I ask if they agree with all of our own country’s policies? Did they agree with all of them even during the Obama Administration? Show me a person who supports every one of his/her country’s policies and I’ll show you a political hack. Worse, I’ll show you a political thug (see Khamenei, Ali or Maduro, Nicolas). One of Israel’s proudest accomplishments is that it remains a democratic State in which citizens of all ethnicities can vote. This means that it is susceptible to the same short-sighted politics as any other democracy.

Not only do our Jewish academics not stand up for themselves, they permit others to who misrepresent themselves to go unchallenged. In three weeks, the Society for Biblical Literature will hold its annual meeting in Boston. This esteemed organization, which dates back to 1880, lists as its stated mission to “foster biblical scholarship”. It has many Jewish members and has held workshops and published papers on innumerable Jewish themes. This year though, one of the featured speakers at the SBL Conference will be Linda Sarsour, who is famous (infamous?) for saying that one cannot be a feminist and support Israel. In 2012, she tweeted “Nothing is creepier than Zionism”.

How will our Jewish academics react when Ms. Sarsour takes the stage in Boston? Did they see the glowing bio she was given in the official SBL program? Conveniently, it ignored such minor issues as her stated “honor” to share the stage with murderers of innocent Israeli civilians and her support of an American cop-killer currently on the lamb in Cuba. Will the academics politely applaud Ms. Sarsour’s work on behalf of women and human rights, averting their eyes to those aspects from which any decent person should recoil? Perhaps more to the point, what Jewish academic would compose a CV similar yet opposite to that of Ms. Sarsour? What professor will proudly state that he/she is an avowed supporter of both human rights and the State of Israel? Why not?

Instead, as the offensive cartoon of Professor Dershowitz showed, our Jewish academics stay silent. Meanwhile the danger cascades around them. What began disguised as “anti-Zionism” is now becoming overt anti-Semitism. Last week students at Cornell woke up to swastikas on university buildings and posters screaming “Just say no to Jewish lies.” Also last week at McGill University in Montreal, a Jewish student was kicked off the student government board of directors after he was identified as politically active in support of Jewish causes.

These academics had better be very careful. One of the lessons of Jewish history is that if we refuse to stand up for ourselves no one else will. When the day comes that any pro-Israel (or even pro-Jewish) sentiment is considered “offensive” and forbidden in the public square, our Jewish academics will be left with nothing to do but weep – weep like boys and girls for the freedoms they refused to defend like men and women.