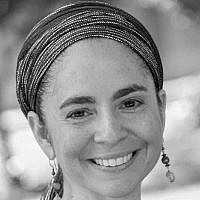 The Blogs
Dahlia Topolosky
Apply for a Blog
Advertisement
Please note that the posts on The Blogs are contributed by third parties. The opinions, facts and any media content in them are presented solely by the authors, and neither The Times of Israel nor its partners assume any responsibility for them. Please contact us in case of abuse. In case of abuse,
Report this post.

Over the past 5 months, we have had multiple visits to foot doctors, and have had four children on crutches for all very different reasons and circumstances. Our eldest fractured his foot while he was on a 3 month trip to Israel with his senior class. He was in a cast and thank goodness, healed pretty quickly, though he did miss out on some fun activities, which was frustrating.

Our next high schooler sprained his ankle pretty badly playing basketball, which is not unusual for him, but alas, he, too, was on crutches and in a brace for a while. On the second day of Pesach, our teenage daughter was playing with her younger cousins, tripped on a toy, and fell down the stairs injuring her foot and tearing some ligaments. She was on crutches and in a boot for a few months, but since the foot never healed, she was put in a cast for the next 4 weeks.

And then there’s our youngest. We got a call from her sleepaway camp just a few days after she arrived. Some kids were playing around and a bench fell, landing on her foot while she walked by at that exact moment. Her summer was significantly impacted by her injury and after a follow up with the doctor was told that she has a contusion of the growth plate and needs to be in the boot for another 4-6 weeks.

I know that thank goodness none of these injuries are life threatening, and yet, reading through all the different injuries sounds like a lot. So yes, it’s been a lot, mostly for my brave children, and for us parents to manage it all, and I’m leaving out many details of all the phone calls, doctor visits, missed activities, and challenges, especially navigating the beginning of school most recently.

And while I totally understand the expected and mostly empathic reactions of, “Wow your family has had lots of foot issues this year” or “What’s up with the foot issues in your family,” or “Oh wow! You have another kid on crutches?” I have been trying to look within and understand why these comments have been difficult for me. I have even had some say, “Maybe check your mezuzahs,” since for many, when something is going wrong, they want to try to find the reasons why.

Logically, of course I knew why: They are just kids and kids get hurt. We even went to one doctor’s visit where the doctor said, “Oh whenever my kids break a bone, I say, “Way to go for being a kid!” But I have to admit I was definitely not at that level of acceptance and I couldn’t help often feeling that having four kids on crutches in the last six months was beyond the “norm” and I too wanted to understand “why?”

In some ways, searching for reasons resonates with me. I’m a spiritual person and believe that we are challenged to find deeper meaning in our experiences. So I went through what a spiritual seeking person may go through. “What are we doing to cause all these injuries?” Or maybe, “Gd is telling me/us to slow down since we tend to have a tendency to take upon ourselves too much sometimes.” Or Maybe Gd is telling us to make Aliyah (going up) La’regel (by foot) and move to Israel!” Or…Or…Or…But when I stop and reflect, I recognize that such a way of thinking has caused me more anxiety, led to self-blame, and has been an obstacle to my own spiritual growth and ability to manage stress in a healthy way.

As I reflect in the month of Elul, I ask myself, How do I wake up each day and not let my fears that my girls won’t heal not overwhelm me? How do I have more faith that all will be ok and that in the large scheme of life, these are small things? How do I validate the stress, but at the same time have perspective? I’ve been pretty good at focusing on the positive and being there for my children, but in my own private moments, I’ve shed some tears and felt very overwhelmed. As a psychologist, I know many tools, but as a human being it’s been hard to use them effectively. I’ve tried identifying my cognitive distortions, reframing, meditating, focusing on what I can control, being more physically active, and many others, which have all been only somewhat helpful.

And then I was doing some learning about the shofar and was struck at some of the halachot (Jewish laws) surrounding it. For instance: A shofar that is split/shattered and was glued back together, cannot be used. And there are debates among the rabbis what to do if there was a hole in the shofar and it was patched up, mostly ensuring that the sound of the blast is not impacted. Why is it so important to have a shofar that is whole, without holes and so important to ensure that sound is not hindered? Perhaps one reason is that the sounds of the shofar, based on the 100 cries of Sisera’s mother not knowing if her son was alive, thus represents our own deepest cries of fear and uncertainty. But these sounds emerge from a “whole” shofar to remind us that when we cry, it does not mean we are broken.

When we feel broken, it’s very hard to see the light. It’s only when we are fully focused on the sounds of the shofar, that we are able to cry while embracing our uncertainty, without judgment, and open the doors for healing.

On the first day of school one of my daughters said, “Everyone is going to say look at the broken Topolosky sisters.” And I said, “Well then they got it wrong. You are the healing Topolosky sisters.” As we hear the sounds of the shofar, let us embrace our wholeness, and feel a renewed sense of hope and strength.

About the Author
Dr. Dahlia Topolosky is a clinical psychologist in private practice at the Integrative Therapy of Greater Washington who specializes in the treatment of mood disorders. She is also the Rebbetzin at Kehilat Pardes,The Rock Creek Synagogue in Rockville, MD, and has a passion for creating spiritual women’s programming.
Related Topics
Related Posts