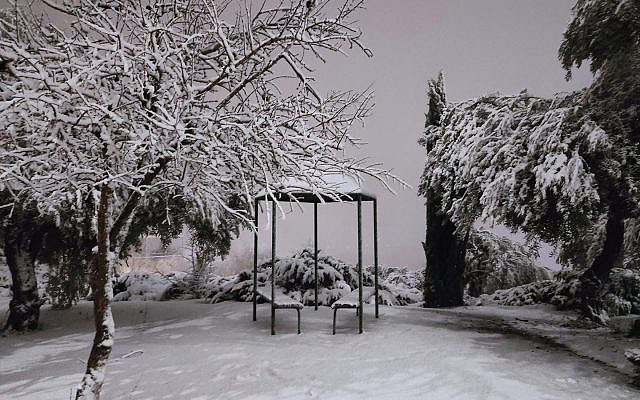 Pardes Rimonim Garden, Neve Daniel (January 2022) built by my parents, Sylvia and Hy Pardes . The indelible imprint of their deeds on behalf of the Jewish People is already felt by several generations. (Linda Pardes Friedburg)

During a particularly beautiful shiur on Parshat Truma this week, Sivan Rahav Meir quoted from Sefer HaHinuch:
“אחרי הפעולות נמשכים הלבבות”
“Our hearts are influenced by our actions” – not the other way around.

The small and big things that we devote time to, day after day, ultimately both shape and reveal who we are.

After receiving the miracles of the plagues, their freedom, food, water and protection in the desert, and finally the Torah at Mt. Sinai, the Jewish People is asked to start actively doing and giving in this Parsha – through the daily, consistent work of the Mishkan.

Unlike their responses of complaining and doubt in light of God’s “gifts” heretofore, they rise with enthusiasm and generosity to this new responsibility.  God’s intentional formulation of the command “And they will take for me an offering” (not give to me) is self-fulfilling, because by giving and creating a life of service to their God and community, the nascent Jewish People actually receive their purpose and identities. Giving is receiving, because meaningful, repeated acts shape us much more than ideals or aspirations.

And the opposite is also true – if I frequently do less meaningful things just to pass the time, I reduce who I am and my authentic impact on the world.

But there is even more to that formula.

When my kids were young, finding creative and meaningful things for them to do after school often preoccupied and frustrated me. I succeeded occasionally! – and this was before the onset of personal screens – but today I see how each of them care deeply, in their own way, about bringing people together and creating meaningful community.  The subtle atmosphere they grew up in – of preparing frequently for guests, holidays, Shabbatot,  – continuing the atmosphere of my parents home – played probably the biggest part in who they became.

In the 21st century, one of our biggest struggles is how to use our free time. Even my youngest feels frustrated if she gets caught up for too long on a phone app. As long as she still senses this (without too much guilt from us), she is still likely to choose to go run the dog, do art or write, meet friends, play basketball. This is my grateful prayer.
And as for us adults, I more and more prefer unwinding at night with a Torah shiur by Rav Uri Sherki or by reading, versus a movie, which may or may not leave me inspired.

One thing is so clear to me.
After learning the Parsha each week for many years, I cannot stop referencing it, because it has become my anchor of truth and depth in an ambiguous and tumultuous world. This daily/weekly habit has made me a more faith-filled Jew.

And here, a word of appreciation and admiration for Sivan Rahav Meir – a young journalist and mother of five from Jerusalem – who inspired me again to write this week, and who impacts hundreds of thousands of Jews throughout the world in numerous languages with her daily, contemporary anecdotes of faith and Torah.

“וְעָשׂוּ לִי מִקְדָּשׁ וְשָׁכַנְתִּי בְּתוֹכָם.”
“And they will make me a Tabernacle, and I will dwell among them.” (Shmot 25: 8)

And we will create a framework of regular deeds that enrich and uplift us, be true to our  essences, and feel God’s presence in our lives.

About the Author
Linda Pardes Friedburg made Aliyah from New Jersey in 1990. She is Founding Director of Shishi Shabbat Yisraeli National Jewish Leadership Initiative for Young Russian-Speaking Israelis, is grateful for her six kids and one Belarussian husband, and still feels the need to pinch herself every time she drives up the hill to Neve Daniel, Gush Etzion, their home since 1994. https://youtu.be/i0cR_j6OLP4 www.en.shishi.co.il EMERGENCY UKRAINIAN/RUSSIAN NEW OLIM CAMPAIGN! https://www.jgive.com/new/en/usd/donation-targets/64189
Related Topics
Related Posts
Comments