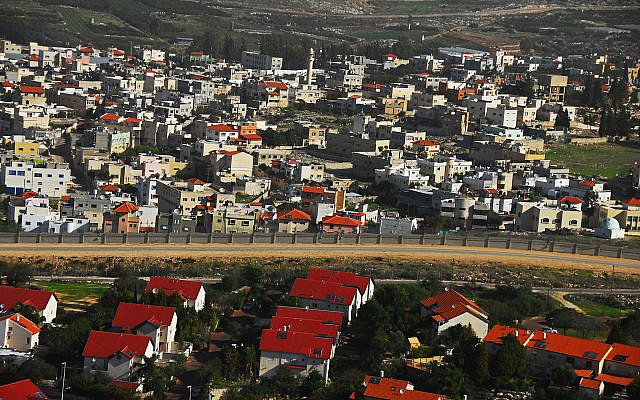 Aerial view of the "disputed territories". Photo by Carrie Hart

No one wants to take responsibility for “the day after” Israel exerts its authority over 30% of land in the West Bank (Judea and Samaria), and the Jordan Valley. Will Israel be able to endure what may happen diplomatically, including the possible downgrading of relations with other nations? And, will Israel face a military conflict causing instability in the Middle East region?  No one knows, but no one wants to be faced with “I told you so”, either.

If you interpret the U.S. peace plan to mean that Israel must wait until it has a partner on the Palestinian side, then no action should be taking place… yet. Those who are supportive of this opinion are also insisting that the era of the two-state solution is not over, and any unilateral moves on Israel’s part are dangerous diplomatically and militarily. There are threats to Israel by these opinion holders who call Israel’s attempt at “unilateral annexation” troubling in that it will cause a serious deterioration in diplomatic relations with Middle East countries, especially the Gulf States. They believe it will also cause a serious deterioration in relations with Europe, the EU, the UN, and the U.S. Democratic Party. They also think it could cause a military conflict with the Palestinians, and a possible end to the peace treaty with Jordan.

This doomsday scenario is being pushed by those who have fought for the Palestinians to have their own state, with a vision for two states in the region living side by side – Israel and Palestine. In fact, the ultimate threat by those holding this opinion is that the result of Israel “grabbing” land will be a deterioration to the point that there will never be two-states in the region. Israel will have to put up with one-state for all — Jews and Arabs – with equal voting rights, therefore, threatening the very nature of a Jewish and Democratic state of Israel.

If you interpret the U.S. peace plan, put together by three Orthodox Jews (Jason Greenblatt, Jared Kushner, and David Freidman), and approved by Republican U.S. President Donald Trump and many American Evangelicals, as truly the “deal of the century,” then you are of the persuasion it is the best plan to-date that Israel has ever been offered by peace negotiators. And, those in this opinion camp believe there probably won’t be such a great plan in the future, especially if the Democrats win the next U.S. election. In fact, according to this camp of believers in the Trump plan, it is the first time that a U.S. Administration has said Israel does not have to withdraw to the 1967 borders. According to Trump and his peace advisors, Israel is no longer a culprit of “occupied Palestinian territory”. In fact, there is at least a 30% portion of the land that is no longer considered “disputed territory”, but is now solely considered, at least by the U.S. and its partners, to be Israel’s “sovereign” territory. That is a major accomplishment in diplomatic relations to some Israelis and Americans who advocate this plan.

There are opinion holders in this same camp who claim that applying the “rule of law” over territory that belongs to Israel anyway (Judea and Samaria, the heartland of the Promised Land), is simply exerting Israel’s authority over biblical property deeded to Israel by God, Himself. It is land that Israelis have been stewarding since ancient times, and it is land that they will continue to steward. Moreover, allowing this land to be in the hands of Israel’s enemies (especially those who refuse to come to the peace table), will result in hundreds of thousands of Jewish settlers being subject to future terrorism.

Some strongly opinionated settlement leaders claim that it leaves at least 15 settlements in the West Bank (Judea and Samaria) without protection, with an end result being a unilateral withdrawal by those settlers (similar to what happened in the withdrawal from Gaza). There are settlers in the 30% “safe zone” (the settlement blocks approved as Israeli territory) who do not want to abandon their fellow man in outlining settlements that could be part of a Palestinian enclave. However, other settlers disagree with this assessment. So, there is now a division in the settler movements based on the outline of the Trump peace plan.

Other opinion holders claim that the answer to the dilemma of Israeli “unilateral annexation”, or applying the “rule of law” over land, based on the Trump plan, is not enough of an answer to the current conflict with the Palestinians. This opinion camp believes that to do nothing is the best answer. The reason for this is that applying “sovereignty” over 30% of the land, in exchange for the acknowledgment of a Palestinian state, is entering into a political trap for Israel; one that the nation will never be able to retreat from.

Some strong Bible-believers, among Jews and Christians, share similar opinions that all the land from the Euphrates to the Great Sea belongs to God, and He has given this land to Israel to steward forever. For those in this Bible camp, the Trump peace plan is a compromise that puts Israel in a quagmire if Israeli leaders decide to apply 30% sovereignty over the land, while at the same time, agreeing to a Palestinian state on the 70% that will be deemed Palestinian land in the future.

With the current two-headed Israeli government (Prime Minister Benjamin Netanyahu, and Prime Minister “to-be” Benny Gantz), there seems to be no unified decision, as of yet, on how to proceed with the Trump plan, including exercising Israel’s authority over 30% of the land. According to their coalition agreement, Netanyahu has the final say in the matter, over Gantz. But, for political reasons, including keeping a calm atmosphere within the current Israeli government, Netanyahu would, most likely, want unity between himself, Gantz, and Foreign Minister Gabi Ashkenazi.

“A house divided cannot stand,” and solidifying a unified front in the “house” of Israel’s new government is an important factor for Netanyahu. It has also been assessed that he wants his legacy to be peace with the Palestinians… or, at least Netanyahu being the Israeli prime minister that didn’t give up land, but gained land, under his rule and reign in political office.

Gantz is also the Minister of Defense of this new Israeli government, and he wants to be seen as being prepared for any military scenario that develops the “day after” Israel exerts its authority over land. That is why Gantz wants to see the completed U.S. maps that outline final borders in the Trump peace plan. The IDF could then be ready to defend these borders. Gantz has spoken of these as being “permanent” borders, while others in politics have hesitated to make such declarations. In any event, the U.S. is not revealing the maps, yet, and no final borders have been acknowledged publicly.

Some analysts would say that the stalemate in Middle East peace negotiations has had some spikes of interest and hope, but the uncertainties regarding future global diplomatic instability, and regional militarily instability is producing an impasse.

So far, what America’s prospects for peace has created in this impasse is: a hint by Mahmoud Abbas that he could dissolve the Palestinian Authority;  a new Palestinian initiative to stop security cooperation with Israel; and, an attempt by Palestinian diplomats to find favorable European nations willing to declare their support for a Palestinian state. Support for Palestinian independence, without the Palestinians having to sit at the peace table, is the initiative that is moving forward, while the proponents of the Trump plan are simply treading water.

With the continued strong opinions being brought forth by public officials on both sides of the issue, including divisions in describing the interpretation of international law, nothing can easily move forward.

At this rate, there will be “no day after”, as there is still “no day before” yet to be defined.