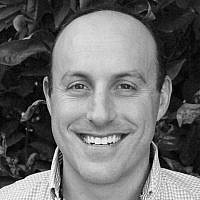 As people in much of the world complain that out-of-touch leaders don’t understand pandemic poverty, Israel’s President Reuven Rivlin showed me he really is one-of-a-kind.

President Rivlin just reported for duty at the Leket Israel distribution center, where a smaller-than-normal team of staff and volunteers is struggling to pack produce fast enough to keep up with demand from families stricken by the economic fallout of the pandemic.

Our octogenarian leader arrived at our facility on Thursday, ready to get his hands dirty, sorting produce and packing it up for needy families. And he also did something that is far harder too: he listened.

Extended and detailed conversations on poverty are always difficult. But this is exactly what President Rivlin showed up for.

He is deeply concerned about the hunger that is sweeping Israel, as unemployment rises and poverty rockets, and felt a moral imperative to seek out those of us fighting on the front lines, and understand the full scale of the challenge.

President Rivlin didn’t come to our warehouse for a photo opp; he came to ensure he is in touch with his citizens, and to make a difference. His car drove straight into the warehouse and I had the honor of going to meet him from his door, and from that moment, it was straight down to business. 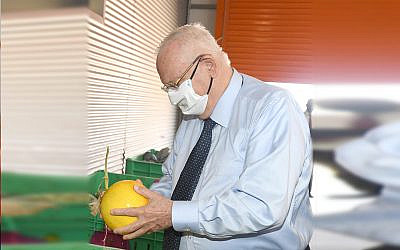 In a lengthy meeting, he wanted to know all the details of the hunger facing Israel, how Leket is trying to help, and where we could benefit from institutional government help. We talked about poverty, agriculture, the need for government funding for organizations like Leket. The President was knowledgeable on all issues.

He spoke to us passionately of the “families and individuals whose lives and dreams are under threat of being crushed by the virus and what it is doing.”

He said: “Those in need now need more. It is at difficult times like this that we measure social solidarity and mutual responsibility. Organizations like Leket Israel put into practice these important values.”

Israel’s Minister of Agriculture and Rural Development Alon Schuster took part in the visit and said he admires the way that our work “shows the importance of Israeli agriculture in creating food security.” 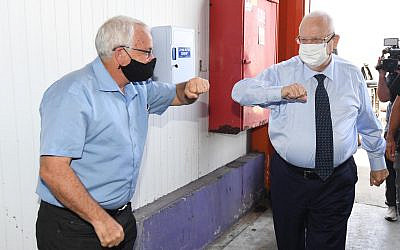 It wasn’t primarily a conversation about funding, but we did discuss the problem that Leket Israel doesn’t have any guaranteed and ongoing state-allocated budget. “It is right that the State of Israel should support large organizations like Leket,” President Rivlin said. “You know the field, can work efficiently and quickly in crises like this. This is a difficult time for Israel.”

After the talking came the schlepping. It wasn’t the first time that President Rivlin has become a volunteer packer for Leket. In 2016, the main hall of his residence, regularly used to host official events, was packed with hundreds of people packing Passover meal packages for needy families. I remember that the President’s late wife, Nechama, a champion of social causes, was in her element.

The scene was far quieter this time, as social distancing rules were carefully followed. The President took great joy in taking great Israeli produce that our volunteers have “rescued” from fields — fruit and vegetables that would otherwise rot because it isn’t profitable for farmers to pick — and packing it ready to become meals in the homes of the needy. 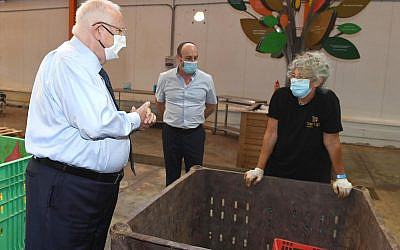 It was a day like I never imagined. A day that I spent by the side of Israel’s President, or strictly speaking two meters from his side. A day that left me, despite being in the thick of the biggest challenges we have ever faced, feeling inspired.

After all, nobody would blame President Rivlin, or even raise an eyebrow, if he stayed in his residence, telling anyone who needs him to find him there, or on Zoom. But when his citizens are hungry, he felt compelled to get in touch with us, leave his comfort zone, and illustrate how much he cares with words and actions.

He is not running for office. He doesn’t need ratings in opinion polls. He isn’t planning a next career move — he’s already at the pinnacle. Our President showed up simply because it was the right thing to do, and in my view that is a leadership style that the Jewish state can be proud of.