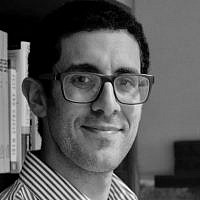 The Blogs
Joe Wolfson
Apply for a Blog
Advertisement
Please note that the posts on The Blogs are contributed by third parties. The opinions, facts and any media content in them are presented solely by the authors, and neither The Times of Israel nor its partners assume any responsibility for them. Please contact us in case of abuse. In case of abuse,
Report this post. 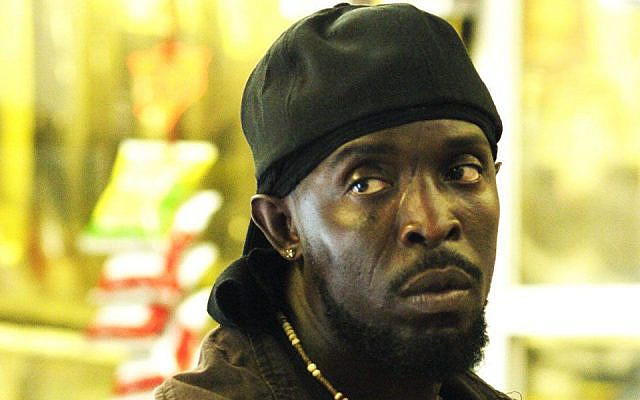 JTA — Between 2008 and 2011, one of the ways I survived in yeshiva was “The Wire,” HBO’s groundbreaking police drama. Tosafot and Rambam throughout the day, Brother Mouzone, Avon Barksdale, and McNulty late at night.

Our beit midrash had a main lower part and an upper part up some steps. These were the low rises and the high rises. The fish pond in the garden was the docks. When one of my rabbis asked me about my dating life, the scene of imprisoned Avon asking young Marlo how things on the street were going came to my mind. I responded as Marlo did: “It’s all in the game.”

I can own my weirdness, but I wasn’t alone. A friend who had attended elite private schools and universities in the UK before moving to Israel to work in tech — his life was about as far removed from the Baltimore ghettos as possible  — told me he loved “The Wire” so much because “I can just relate so well to the characters.”

Ridiculous and outrageous as this may be, it’s a testament to the unique brilliance of “The Wire.” I can only assume that if Orthodox Ashkenazi Jews responded this way to “The Wire,” then other cultural subgroups were similarly riveted.

To call it the greatest TV show of all time is too simplistic. It’s a strong competitor for the most powerful presentation and trenchant critique of inner-city America — as relevant now as when it first came out. Where “The Sopranos” is a microscopic focus over five seasons of a single individual, “The Wire” has a cast of hundreds. My havruta at Cambridge, an English literature student who first introduced me to the show, made the astute observation that “The Wire” can be usefully compared to a Dickens novel in which the central character is the city of London. The central character in “The Wire” is the city of Baltimore.

Yet even amid all this brilliance, one character especially stood out. Omar Little, a frightening stick-up artist who nevertheless lived by a code of honor, stole nearly every scene in which he appeared. As The Guardian once put it, “If ‘The Wire’ is a cult, then Omar is a cult within a cult.”

The actor who played Omar Little, Michael K. Williams, died last week on the eve of Rosh Hashanah at the age of 54. Years after the show aired, I had the privilege of getting to know Williams. His passing and the memories it brought back suggested what society in general and the Jewish community in particular can learn from the life he lived.

In 2015, I began working as a rabbi at New York University’s Bronfman Center for Jewish Life. Downtown Manhattan boasts more than its fair share of famous folk, and one day the man I could only think of as Omar literally bumped into me. Any desire to respect his privacy was overwhelmed by my excitement. Far from being annoyed at my intrusion, he was exceedingly gracious and even agreed to record a Shanah Tovah greeting for our community. We arranged to get coffee a couple of weeks later.

Humble, gracious, curious is how I would describe that coffee.

I asked a few questions about “The Wire.” Was the Sunday truce — when warring gangs would put down their arms — actually a thing? I told him how many Jews were obsessed with the show and completely baffled him when I showed him the brilliant Omar Omer counter.

We spoke personally. He told me that the money he had made from “The Wire” had been spent, but that he had a new opportunity coming up and the earnings would be put to good use. He told me about his family, and his plan to spend Thanksgiving with his mother, siblings and wider family. I told him about my mother-in-law who was fighting cancer. He empathized and recommended various CBD oils to alleviate her pains.

I told him about my work with students at NYU and he told me about his nephew who had recently left jail after 20 years and the HBO documentary “Raised in the System” they had made together focusing on the school-to-prison pipeline. He wanted to find audiences for the documentary’s message. I wanted to find a way for our community to think seriously about criminal justice. We decided to work together. 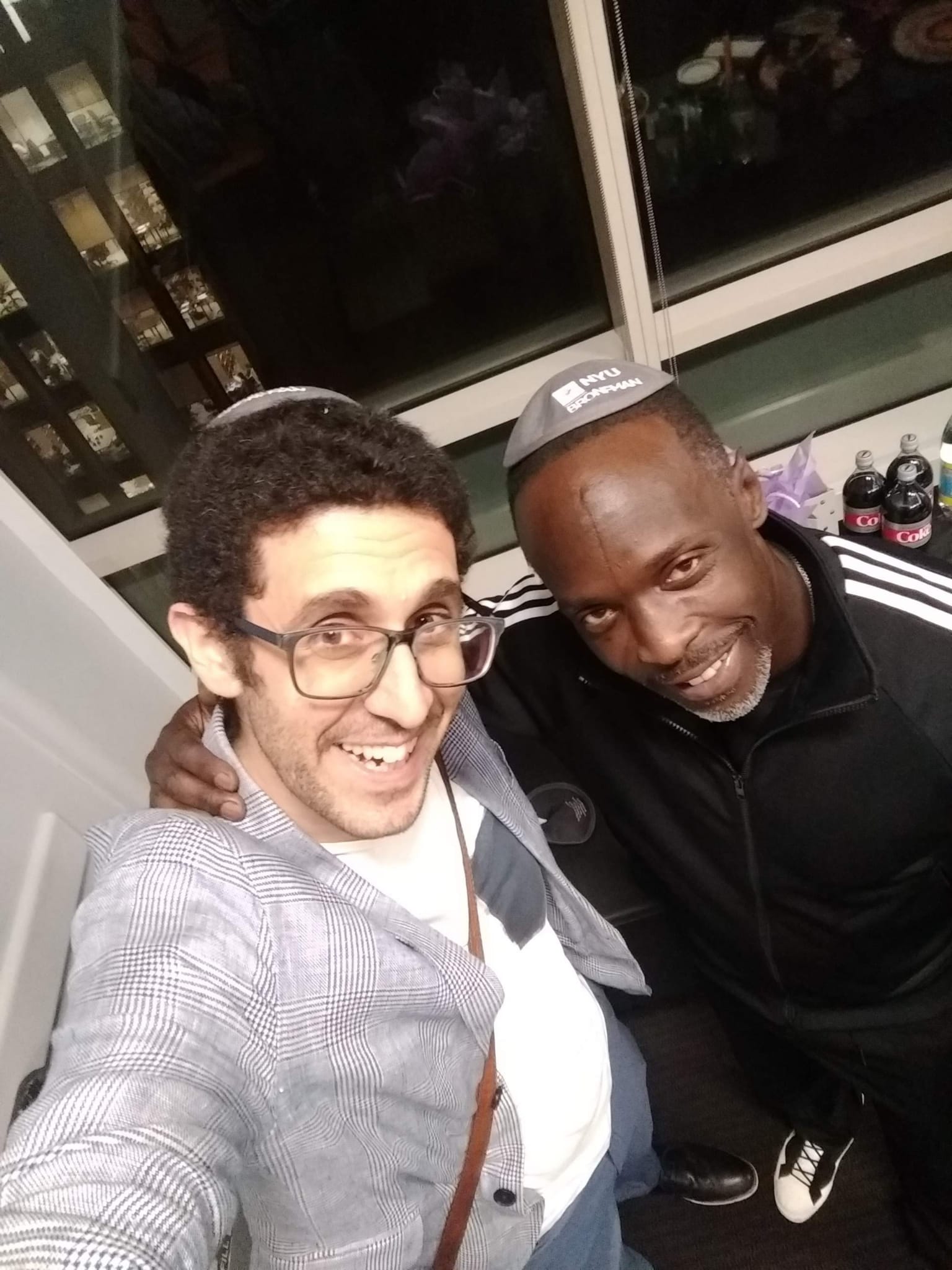 Few of the tributes in recent days have focused on Michael’s work as an activist, but I am reasonably confident that if he could choose one of his works that people would watch in the aftermath of his passing, it would be “Raised in the System.”

Shortly before Passover, in the spring of 2019, the Bronfman Center and the Orthodox Union’s Jewish Learning Initiative on Campus at NYU hosted Michael for a viewing of the documentary and a panel discussion.

It is impossible to watch the documentary and not feel broken-hearted over the lives of beautiful young people who get sucked up within the prison industrial complex. In its 45 minutes, the documentary takes a viewer from being an outsider to the issue to a passionate believer that incarceration rates are a national priority issue which must and can be fixed.

Yet the stars of the evening were not Michael and the documentary, but the guests he brought with him to tell their stories.

Dominic Dupont, Michael’s nephew and documentary partner, had been released recently, following two decades behind bars for murder. He said he “treated prison like a university,” attained counseling qualifications, and became an inspiration to other prisoners in helping turn around their lives.

Derrick Hamilton, who spent 27 years in jail for a crime he did not commit, taught himself law while inside and overturned his conviction — and those of many of his wrongfully convicted fellow inmates.

Dana Rachlin, a young Jewish woman and a frequent collaborator with Michael, came along with a dozen black teenagers whom she referred to as “her kids.” Dana had founded a charity that worked with kids at the schools in Brooklyn with the highest school-to-prison graduation rate. Her work sought to break this pipeline and had achieved remarkable success.

Awe and humility are my abiding memories of the evening. A packed room of Jewish students were thinking deeply about what incarceration and freedom could look like, and about how justice could be structured around atonement for crimes and self-improvement rather than around punishment. Without exception, the students who spoke to me afterward — none of whom came from an activist background — expressed how much they would be bringing from the evening to their seder tables.

Michael, Dominic, Derrick and Dana stayed on for dinner after the event sharing stories, taking pictures, answering questions. Schmoozing. In addition to telling their critically important stories, they had also come to meet the audience, hear their stories and find common ground. A friend of mine — a rabbi of an Orthodox synagogue in the UK — saw my Facebook posts about the event and brought Derrick and Dana to speak to his community.

After the event, Michael said to me that “if the Black and Jewish communities could work together, nothing would be able to stop us.”

Michael wished to tell the story of his own community, but simultaneously expressed a genuine curiosity about the Jewish community. We spoke about doing a series of conversations with one another on the Book of Exodus — the original story of slavery and liberation — and its relevance to our times. One day, he was in the building at the same time as Rabbi Jonathan Sacks, the chief rabbi of the United Kingdom, and expressed an interest in meeting the man I had described to him as “the premier Jewish thinker, a man obsessed with justice.” The students’ meeting with Rabbi Sacks ran overtime, otherwise the King would have met the Lord.

Michael was open about his struggles with addiction and passed away from a suspected drug overdose. His passing has been in my mind throughout this week of preparation for Yom Kippur. It feels appropriate to reflect on what we can all learn from those who face similar battles to Michael.

Maimonides lists the threefold requirement of teshuvah, or repentance, as confession (vidui), regret (charata) and determination for the future (kabala l’atid). I have seen no greater lived example of the struggle to live those three elements than those who struggle to overcome addiction.

Those people I have been privileged to know, such as Michael, for whom every day is a challenge, show us the truth that we would all do well to remember, that teshuvah is not something that is “achieved,” a destination arrived at. Rather teshuvah, like the recovery from addiction, is an ongoing process and struggle that is never over, and requires constant work and regular re-examination.

As Michael went through many struggles, he simultaneously used his story, fame and innate brilliance to help others. And he did this with humility and a smile.

No matter how great Omar Little is, Michael K. Williams was infinitely greater. May his memory be a blessing.

About the Author
Joe Wolfson is the rabbi of the Orthodox community at New York University. He is also a Jewish educator who writes and teaches via www.joewolfson.com. He has degrees in politics from Cambridge and UCL and has taught in Sydney, New York and London where he is on the faculty of London School of Jewish Studies. He previously lived in Israel, where he was a member of the Kollel Halacha at Yeshivat Har Etzion (Gush).
Related Topics
Related Posts
Comments