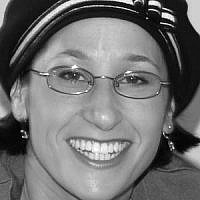 The Blogs
Rachel Moore
Apply for a Blog
Please note that the posts on The Blogs are contributed by third parties. The opinions, facts and any media content in them are presented solely by the authors, and neither The Times of Israel nor its partners assume any responsibility for them. Please contact us in case of abuse. In case of abuse,
Report this post.

Two weeks ago, I had the privilege to attend a Bloggers’ Israel ScaVenture in Yemin Moshe. Israel ScaVentures hosted a group of us to play hooky (I mean “work in the field”), and test out this particular Scavenger Hunt first hand.

I have done many of Israel ScaVentures, and I am a huge fan. It took me many years to understand that there is such a thing as an “experiential learner” – and that I am one of them. Immersing oneself in an active way for me is the best way to learn, and I believe is why tiyulim in general are such an effective educational tool.

Each ScaVenture is different and the Yemin Moshe experience was the most nostalgic for me. I used to work out of a beautiful Yemin Moshe apartment many years ago, and spent many a lovely shabbat meal in the elegant homes. It is a place that looks so different from the outside and each street tapped into not only the fascinating history of the place, but into the distant memories of an earlier life lived in Israel, before marriage and kids. 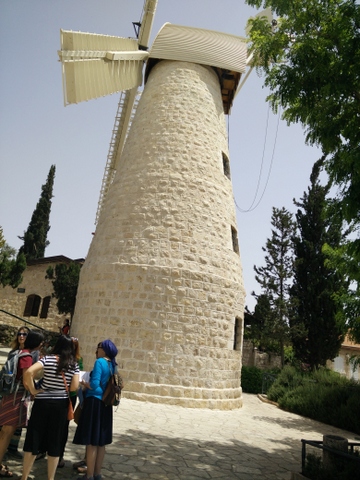 Checking out our clues and mission pack near the Yemin Moshe windmill.

The neighborhood is so lovely. It is only as you learn the history that you can start to imagine the cramped “low income housing” that was given to people willing to bravely step outside of the Old City Walls. And stop to think for one moment about how much of a Jewish presence there was at one time inside the Old City in order for leaving its cramped quarters to be an act of bravery!

It is a privilege for me to write about my experiences each time I go on an Israel ScaVenture, and to share what I learn.

Last year’s Bloggers’ ScaVenture  was in Gush Etzion. The area where I live, my new home at the time for just under two years, I couldn’t wait to learn more of our history. I was already in love with the Judean hills, so romping around in them learning at the same time was like a dream.

I remember getting to the first station and being stunned by the view out of the watch tower, and learning for the first time just how close I lived to the site where David battled Goliath. I remember moving on to ruins I had passed dozens of time before, without having given them a second thought never mind appreciating what they had once been. 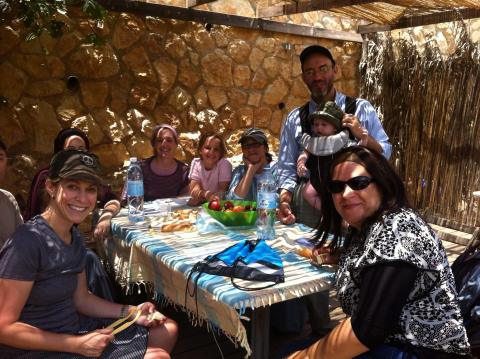 Then I remember the news alerts beginning on our phones.

Children were missing. People were sure it was nothing, they would be found. Maybe just rumors? Two boys and a girl. We moved on to the next station. We sat with lemonade. Others in the group with different apps and different friends had different versions, different rumors. No, it was three boys. We were sure it was nothing. They are teenagers. They were at a regular bus stop. All will be fine. All will be fine. It’s only rumors. One by one, we finished the route. Everyone enjoyed it immensely. But it was forgotten in seconds as one by one, each participant started to say how they had to get on home. Call their kids. Check the news. Confirm that all was fine.

That morning became the beginning of the rest of our lives in Gush Etzion. Nothing was ever the same. Nothing ever will be exactly the same. The names of the places around our homes now include those boys. The front of the bus stop where the three boys were waiting for a ride is permanently changed. Our sense of the “quiet” in Gush Etzion has changed. Our feelings of unity and collective woundedness have changed.

So many of my friends and colleagues processed their feelings in writing. Beautifully, eloquently. I had nothing to say. There was nothing I could say. The anger and fear and anguish and profound sadness just swallowed all of my words. For months.

This year, as I walked around the streets of Yemin Moshe, finding clues and learning history with friends and blogger colleagues, I thought about how much has changed – and how much just seems to stay the same. I have slowly found my voice again, and have returned to write. But not about  that day; nor about last summer. It still fills me with nothing but loss and sadness.

Every Israel ScaVenture echoes with the themes of our history; the sacrifices we have made to make a Jewish home here in the Land of Israel. The bravery of others, the gestures of the few that have enriched the many. How every day we have in the modern State of Israel is a gift, and a gift that has come with a price. One learns that the truest appreciation for this gift is to use it, learn about it, celebrate it. That we need to continue to learn about our history, to hold on to the good days – and the days that are so tragic that the music dies and our words fail us. That we honor lives lost by being an active part of the ongoing story.

Find an opportunity this summer to honor the boys, and to honor the many by being part of the story; find a way to come to Gush Etzion, to learn the history, to be a tourist, a student, a traveler, and to celebrate the gift.

To learn more about the Gush Etzion ScaVenture or any of the other ScaVentures, visit www.israelscaventures.com