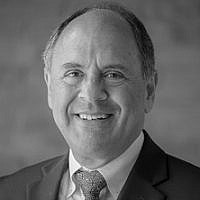 The Blogs
Chuck Freilich
Apply for a Blog
Advertisement
Please note that the posts on The Blogs are contributed by third parties. The opinions, facts and any media content in them are presented solely by the authors, and neither The Times of Israel nor its partners assume any responsibility for them. Please contact us in case of abuse. In case of abuse,
Report this post.

Two years ago I announced, with all due flourish and panoply, the establishment of a new school of foreign policy thought, to be known henceforth and throughout the generations, as the “Dayenu School.” In just a remarkably short time, the new school has gained a place of pride alongside the venerable “realist” and “liberal” schools.

The exuberant song, Dayenu, a climactic highpoint of the Passover Seder, provides the intellectual provenance for the new school. In this third annual installment, I offer an updated version of the traditional song, adapted to the events of 2020-2021 (5781 according to our ancient traditions), and presented with all of the humility and self-abasement for which our people have long been renowned.

For those who are unfamiliar with the Seder, the dayenu (“it is enough”) song poses a series of miraculous events that God could make happen for the people of Israel, each of which would be enough. To illustrate, if God made X happen, that would be best, but if he only did Y, dayenu.

Those familiar with our hallowed rites will note a fortuitous circumstance, akin to the miracle of the Exodus itself, that dayenu is sung at a point when the imbibing of viscous Passover wine, one of the Seder’s culinary delights, has yet to produce an enervating lethargy bordering on the comatose. Were it otherwise, it is not inconceivable that some members of our fractious tribes might not always have had the celebratory and cerebral capacity necessary to complete the Seder’s second half.

Here we go. To be read with the dayenu melody soaring in one’s consciousness.

If the Netanyahu-Gantz government addressed Israel’s domestic challenges, healed the nation, and charted a constructive new foreign policy, that would be best, but if it only succeeds in minimizing the ravages of the corona crisis and preventing a complete economic meltdown, dayenu.

If the Knesset barred premiers from serving under indictment and for more than two terms, that would be best, but if it only refrains from enacting the monstrous proposal that would enable Netanyahu to remain a minister even under indictment (if the rotation takes place), dayenu.

If Netanyahu finally stepped down and allowed new leaders to emerge, stood trial to prove his innocence, or simply cut a deal, that would be best, but if he would only use his virtuoso political skills, demonstrated so dramatically of late, to promote socioeconomic reform, and just stop subverting Israel’s democracy and rule of law, dayenu.

If Litzman had not failed so egresiously as Health Minister, he and Deri were not suspected of corruption, and the Haredim (ultra-orthodox) ceased their parasitic dependency on public coffers and participated in Israel’s defense, that would be best, but if they just enjoyed the freedom that Israel’s democracy grants them to live a life of ignorance, poverty and reclusion, while leaving the rest of us alone, dayenu.

If a centrist government, which understands that annexation of 2.8 million Palestinians in the West Bank is incompatible with Israel’s fundamental character as a predominantly Jewish democracy, had been elected, that would have been best, but if Gantz et al can just forestall the annexationist delusions of Israel’s hard right, dayenu.

If Trump’s peace plan, which calls for two states, rolls-back unrealistic Palestinian expectations, and reasserts both the primacy of Israel’s historical narrative and its inviolate right to security, had been part of an otherwise realistic and balanced proposal, that would have been best, but if he just recognized Jerusalem and the Golan, dayenu.

If Egypt, Jordan the Saudis and other Gulf states openly embraced Israel, that would be best, but if they just succeed in weathering the convulsions likely due to the corona crisis, which may make the Arab Spring pale in comparison, maintain regime stability and avoid a deterioration in relations with Israel, dayenu.

If Trump could compel Iran to accept a better nuclear deal, curb its ballistic missile program and cease regional expansionism, that would be best, but if he just adhered to the old deal, made it clear that Iranian violations would lead to military action and that the restrictions on its nuclear capabilities would never expire, dayenu.

If Egypt, Turkey and the UAE stopped the nuclear power projects already under construction, and the Saudis and others agreed to forego similar deals, that would be best, but if they just adhered to the US 1-2-3 gold standard, thereby easing the prospects of nuclear proliferation and of the emergence of the nightmare scenario of a Mideast with multiple military nuclear powers, dayenu.

If the EU lived up to its lofty democratic ideals and defied the world’s authoritarian leaders and rogue states, if its very existence as a union was not threatened by a xenophobic fear of Muslim refugees, or Turkey’s accession, that would be best, but if it just applied its heightened sense of morality with greater reason and even-handedness, dayenu.

If Putin played a moderating role in the Mideast, dropped his admirably egalitarian policy of selling arms and reactors to all takers, without regard to race, creed or radical national policy, that would be best, but if he would only fulfill his promise to contain Iran in Syria and keep it far from our border, dayenu.

Two repeats from last year, because they are as crucial as ever.

If liberal American Jews respected the democratic values they espouse, including electoral outcomes they despise, and accepted that Israeli democracy – much like American – is going through a crisis, that would be best, but if they just recognized that love is unconditional and that there can be no “disaffection” in a family, dayenu.

If Trump and Netanyahu demonstrated moral rectitude and statesmanship, and charted forward-looking futures for their two promised lands, that would be best, but if they just stopped lying through their teeth and tried obeying the law for a change — hey, guys, it is inconvenient but it applies to you too – and we got through the Trump and Netanyahu years alive, dayenu!

Finally, if God made this accursed virus disappear rapidly and stopped making us eat so much, well, matza, that would be best, but if he only let us sing a rapturous dayenu — without Zoom – that really would be enough.

The author, a former Israeli deputy national security advisor, is the author of “Israeli National Security: A New Strategy for an Era of Change”.

About the Author
Chuck Freilich, a former Israeli deputy national security advisor, is a senior fellow at Harvard’s Kennedy School. He is the author of Israeli National Security: a New Strategy for an Era of Change, Oxford Press.
Related Topics
Related Posts
Chuck Freilich
Comments