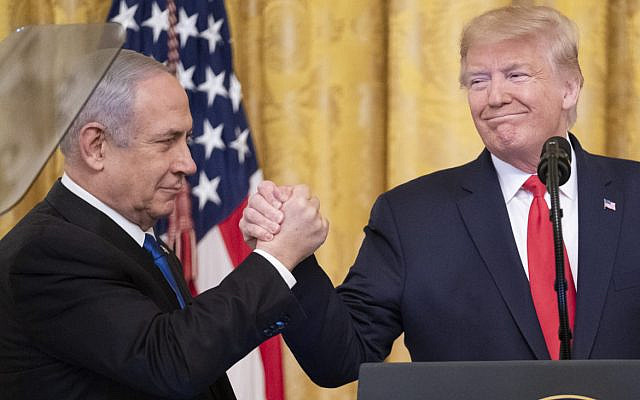 Why did I have any hopes about the Deal of the Century?

Trump – the dealmaker, called Al-Aqsa for Al-Agua. Bibi was happy that Jared Kushner listened only to him and Abbas wasn’t even present. Donald Trump’s peace plan is being condemned from two different sides: the Palestinians and from Israeli settlers. This wasn’t what Netanyahu expected – that the 100 or so-page plan described as a “Historic achievement” that gives Israeli settlements american acknowledgement being rebuked. And on top he might even have hoped for international recognition – which also seems to backfire even harder than ever.

Bibi has been in Washington since a couple of days back, hoping that the festivities around the release of the plan would give him much needed help before the 3rd election – the 3rd in less than a year.

But things changed Tuesday morning when his allies from the settlement movement turned their back on him. Settlement leaders had joined Bibi on his trip to Washington in order to applause both him and Trump. The settlement leaders got a briefing from American diplomats and as an aftermath a stormy meeting with Bibi they decide to declare war against the Deal. The head of the settlers delegation, David Alhayani told Israeli radio;

“- we’ve been deceived. This is a plan for a Palestinian state on a larger part of the West Bank. Netanyahu says it will be a state without an army, that’s just talk! A state is a state, recognized by the rest of the world. We can’t treat it as we will!”.

The settlers are not stupid, they understand that no matter how Israeli-friendly an American peace-proposal might be – it will in the end set a red line for further settlement expansion. Area C which compiles ~60% of the West Bank is already in de facto a part of Israel.

According to Trump’s plan Israel will be allowed to annex about a third of Area C, including the Jordan Valley and most settlements. But the backside is that the Palestinians who today has no control of Area C, will be granted a large area of it in order to connect it to Area A and B.

During a Palestinian government meeting, president Mahmoud Abbas is rumored to have called Donald Trump for “a dog and a son of dog”. For those of you not getting the terminology, being called a dog in an arabic context is equal to throwing a shoe at George W Bush. This incident is denied according to Wafa news agency, but Abbas refused to accept a telephone call from Trump with the reason being that he would never betray his country.

All this is tightly bound together with the three leaders way of doing things on their domestic level. Bibi is facing three corruption charges at the Jerusalem district court, he wanted to make it his lucky get out of jail free card in the upcoming elections – but since the refusal of the plan by the settlers that plan is screwed. In the meantime Trump is facing impeachment in the US – and mind you this might be his only term with a new generation of millenials now being able to vote and they strongly support Bernie & Co.

Mahmoud Abbas himself is hanging on a looser thread than ever, with no options and caught in a corner by Trump, Kushner, Bibi and Hamas – few Palestinians support him today. After three years of being subjected to bullying by Trump, the view on the US has changed dramatically on the West Bank. Who shall they turn to? Before Trump became president the US sort of set a limit of what Israel could do on the West Bank. This changed when Trump came to power and in the same time appointing David Friedman as ambassador to Israel, David is a prominent settler leader with countless ties within that movement. The final drop of water that made everything spill over was the recognition of Jerusalem as Israel’s eternal capital in it’s entirety – Abbas boiled, Fatah boiled, Hamas went bananas and countless threats from Iran and arab countries only made the flame turn into an uncontrollable fire.

Now I don’t care where embassies are placed, but somekind of fingertip feeling in this question could have been made before making this very symbolic move for many people. Some cheered, some weeped, some threw stones, some got killed. But for the most part it’s business as usual.

I really actually honestly down deepest to my very bone rebuke “business as usual” in this question. It’s been like this forever. Will we ever see peace in the West Bank and Gaza? Only time will tell. But one thing is for sure, when two corrupt right-wing leaders unilateraly presents a “take it or leave it”-deal to a third corrupt leader – nothing will change. I wish Bernie was in that room yesterday.