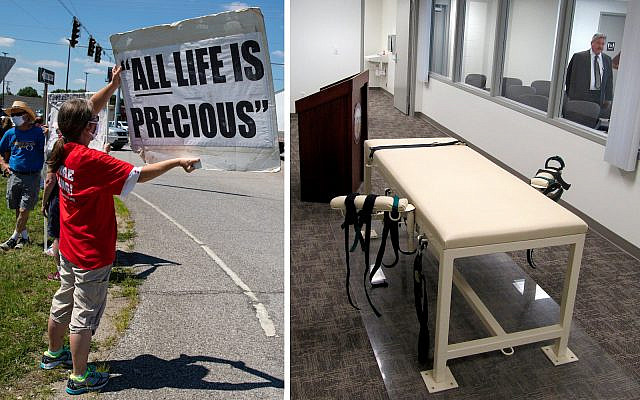 I am a Jewish, multi-faith federal chaplain and former prison chaplain with a message – a plea – to President Trump and Attorney General Rosen.

I represent the nearly 400 members of L’chaim! [To Life!] Jews Against the Death Penalty, a group founded last month that has drawn hundreds of members. We are joined by countless other rabbis, cantors and Jewish community leaders who oppose the death penalty and who, along with us, are aligned with the Death Penalty Action (our Jewish action webpage can be found here).

In my loudest possible cantorial voice, I chant “Never Again!” to state-sponsored killing of prisoners, whether by use of the lethal injection protocols created by the Nazis or otherwise! The death penalty is an abomination before any name for Divinity. It is the epitome of evil, worse than any capital crime, it is collectively premeditated by society and leads to a singularly sadistic form of prolonged, cruel and unusual punishment: namely, the psychological torture of forcing human beings to approach a scheduled date with death against their will.

I know this fact well. I have been in regular correspondence with those on federal death row who have been waiting to die. I have borne witness to their torture. Two have been executed, alongside eight others, including two during the 10 Days of Repentance and two on the first two nights of Hanukkah, when we snuffed out their lights even as we kindled the redemptive lights of Hanukkah. Another individual I am in touch with is slated to be killed in the federal death chamber on January 15th — on what would have been the Rev. Martin Luther King, Jr.’s birthday. You may recall MLK’s views on the death penalty: “Capital punishment is against the better judgment of modern criminology, and, above all, against the highest expression of love in the nature of God.” 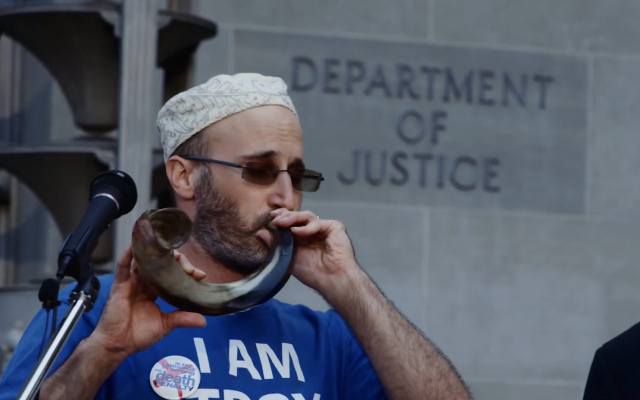 At an execution protest vigil at the US Capitol Steps and Department of Justice during the 10 Days of Repentance and just prior to the execution of Christopher Vialva, who corresponded with me, and who identifies with Jewish practices. My shirt says “I am Troy Davis.” Troy Davis was likely an innocent man executed by the state of Georgia in 2011. (Courtesy)

Future generations of Americans will look back at us and ask what in God’s name we thought we were doing. In the only version of “eye for an eye” that makes any sense at all in 2020, we will have to look our grandchildren in the eye and try to explain why we remained silent bystanders as this horror was perpetrated in our names… and we will fail, lowering our eyes in shame as we avert our eyes from their gaze.

Any government killing of defenseless prisoners is wrong — from those who took the lives of my family members in the Holocaust to that which is taking place in the death chamber of Terre Haute, Indiana. The death chamber is located in the same zip code as the CANDLES Holocaust Museum of Terre Haute, Indiana, which commemorates victims of medical experiments developed by the Nazis, including the protocol for lethal injection created by Dr. Karl Brandt, a personal physician to Adolph Hitler. The Nazis used these lethal injections in their infamous AKTION T4 program to legally murder disabled children and adults along with Jews and others the state deemed undesirable or “unworthy of life.”

The perpetuation of this state-sponsored killing system is the worst kind of slap in the face to those who aspire to learn from the past. It allows the legacy of the hatred and killing of Hitler and the Nazis to live on in this country. Government-sponsored killings of prisoners constitute the diametric opposite of the values of restorative justice and forgiveness that the late founder of the CANDLES museum, Holocaust survivor Eva Mozes Kor, practiced and preached as she corresponded with former Nazis. In my humble opinion, she rolls over in her grave to see what is taking place in the backyard of her museum. I imagine she would agree with another Jewish woman of Herculean strength and wisdom, Justice Ruth Bader Ginsberg, who famously said: “If I were queen, there would be no death penalty.”

It goes without saying that the mass murder of innocents during the Shoah and the execution of those who committed horrible crimes is not to be conflated. My family members who were killed, like millions of others, committed no crimes whatsoever. Neither did my grandmother, who just turned 100 years old on Dec. 24th of this year. Her experience, however, has taught me to speak out against government killing of the defenseless when I see it. Even worse, when it comes to the reality of the execution of people innocent of the charges of which they were convicted, the prospect of an American Holocaust indeed becomes much more real. We saw this happen with Troy Davis nine years ago, along with countless others. President Trump, this is the killing spree you should have ended when you promised to end “American carnage” in your inaugural address.

As a hospital chaplain, I have walked with the dead and their loved ones in hospitals, morgues and cemeteries. I have learned the hard way and first-hand that more pain, suffering and death never bring true healing. Death only brings death.

We cannot allow the legacy of the Nazis to continue, not next to the CANDLES Holocaust museum, nor anywhere in this country.

As a federal chaplain, I carry the responsibility of honoring and serving Divine ideals and the highest values of our nation, which includes balancing justice and mercy. For me, this also includes what National Institutes of Health Director Dr. Francis Collins has reminded my colleagues and me is the foundation for our work at our federal research hospital, namely, “the fundamental respect for human life.”

Dr. Fauci and other doctors and scientists at the NIH do this regularly as we strive to end COVID-19 and other threats to human life. I would not be doing my job as a chaplain before the Divine, nor as a federal employee who honors the values of our government, if I did not speak out in the loudest possible way against this blatant violation of our prime directive. Consider this, then, the greatest act of a “federal whistleblower!”

So, hear this cantor, President Trump: please, in the name of God and humanity, grant clemency to Lisa Montgomery, Cory Johnson and Dustin John Higgs!

Acting Attorney General Rosen, I invite you to please read this petition from Jewish leaders across the country who join me in calling upon you to rescind these three death warrants.

For the sake of your Jewish people, Mr. Rosen, do not allow the legacy of the Nazis to continue in your name.
Your cantor reminds you…“Never Again!”
L’chaim…to Life!
Respectfully,
Cantor Mike Zoosman, BCC,
Federal Chaplain
3rd generation Holocaust survivor