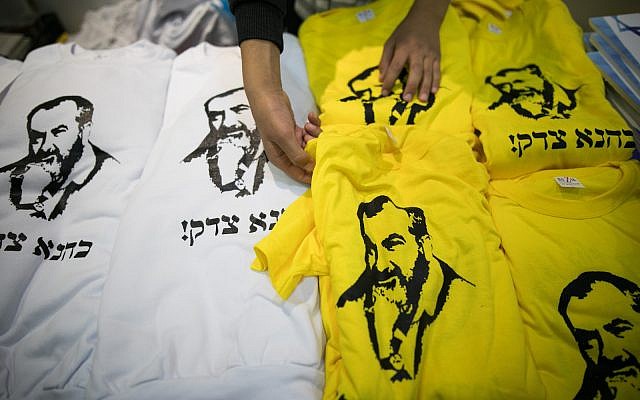 In traditional Jewish consciousness there is no greater sin than Hillul Hashem, the desecration of God’s Name. The irony of Hillul Hashem is that it is a sin reserved for ostensibly religious Jews: Only someone who behaves disgracefully while speaking in the name of God and Torah can be guilty of desecration.

The embodiment of Hillul Hashem in Judaism today is the Kahane movement, whose latest political incarnation, Otzma Yehudit (Jewish Power), has just been brought into the Israeli mainstream through an alliance with the religious Zionist Jewish Home party, with the active encouragement of Prime Minister Benjamin Netanyahu.

“Kahanism” – named for the late American-born rabbi, Meir Kahane – is the spirit behind numerous acts of Hillul Hashem, from desecrating mosques and churches to Baruch Goldstein’s 1995 massacre of 29 Palestinians in Hebron’s Tomb of the Patriarchs. Yigal Amir, the murderer of Prime Minister Yitzhak Rabin, was inspired by Goldstein and by the writings of Meir Kahane. Kahanism allegedly struck in 2015, when someone firebombed a home in the Palestinian village of Duma, killing three family members, including a baby – and then, when celebrants at the wedding of a far-right couple danced with a photograph of the baby and repeatedly stabbed the picture, confusing Judaism for a demonic cult.

And yet Kahanism, focus of intense attention over the last four decades, is little understood. Kahanism isn’t merely a political movement, the most extreme expression on the right-wing Israeli spectrum. In its essence Kahanism isn’t an ideology but a theology, that sanctifies hatred and vengeance in an apocalyptic messianic vision. A theology of Hillul Hashem.

For Kahanism the purpose of Jewish chosenness isn’t to serve humanity – “and through you will be blessed all the families of the earth” – but to rule over it. The messianic era isn’t Isaiah’s vision of a world united in prayer but Kahane’s vision of vengeance against the nations. Violence isn’t a necessity to be dealt out with the measured caution of the rabbis, but an ecstatic affirmation of God’s power and purpose.

The bitter irony is that Kahanism imagines itself to be the theology of Kiddush Hashem – sanctification of God’s Name. According to Kahanism, the Jewish people sanctifies God’s Name by defeating Amalek – the archetypal enemy that is the embodiment of evil, and that takes different forms in each generation. The ultimate expression of Kiddush Hashem, of the Kahanist inversion of the sacred, was the Goldstein massacre – which not coincidentally happened on Purim, celebrating the victory over Haman, a literal descendant of the tribe of Amalek.

The way to defeat Amalek, and thereby prepare the way for the coming of the messiah, is by showing, like Goldstein, a fearless contempt for the world, embracing our destiny of total isolation. We are forbidden to seek alliances: Only by freeing ourselves from the illusion of non-Jewish support will we merit redemption. The greatest Hillul Hashem is for Jews to seek friendship with “the goyim.” Kahanism despises classical Zionism, which aspired to do precisely that by restoring the Jews to the community of nations.

The political agenda of Kahanism – the mass expulsion of Palestinians, the destruction of the Dome of the Rock – would ensure Israel’s total isolation, proving we fear no one but God. Political madness as Kiddush Hashem.

Kahanism is the sanctification of our woundedness, the fantasies of vengeance of a powerless people wedded to the renewal of Jewish power. No one is more dangerous than armed fanatics who see themselves as victims.

In its final descent, Kahanism became a theology of racism. The platform of Kach – political precursor of the Otzma Yehudit party – promoted a law outlawing sexual relations between Arabs and Jews. It was not a left-winger but a Likud Knesset member, Mickey Eitan, who compared Kach’s sex law to the Nazis’ racial Nuremberg Laws.

In 1990, Kahane was assassinated by an Egyptian-born terrorist. Following the funeral, mourners in Jerusalem beat random Arabs on the streets. The funeral-pogrom was a fitting end to a life devoted to violence and hate.

In an earlier incarnation, before he became the theologian of the Israeli far right, Meir Kahane had been my teenage hero.

It was the late 1960s in Brooklyn, and I joined street patrols organized by Kahane’s Jewish Defense League (JDL), to protect vulnerable Jews in urban neighborhoods. Most of all I was drawn to Kahane because of his efforts to free the Jews of the Soviet Union. One night at a demonstration at the Soviet UN Mission, I saw him getting clubbed after charging into a line of police. On the spot I became his follower. Here, finally, was an American Jewish leader ready to sacrifice for his people.

That is how Kahanism began: with a noble cause, with idealism and self-sacrifice, with a minority beginning to sense its power, with the thrill of youthful violence. American Jewry, the most timid of communities, had never seen anything like this outbreak of militancy for a Jewish cause. We were the generation born after the Holocaust and just beginning to confront its meaning; the generation born after the creation of Israel that had just experienced the vicarious victory of the Six-Day War. And we were American kids growing up in the era of SDS and the Black Panthers, of violent street theater. In those years Kahane didn’t speak of apocalypse and redemption but of Jewish pride and protection. More than anyone else, Kahane read our teenage souls, helped us synthesize Auschwitz and Jerusalem and Berkeley.

In the JDL we harassed Soviet diplomats and disrupted performances of visiting Soviet artists and blocked traffic in the streets of Washington. Some JDLers placed bombs at Soviet offices.

I had my doubts about Kahane. There was something in him that seemed unformed, childish. He didn’t just advocate but celebrate violence. I hated when he formed an alliance with an Italian-American front group for the Mafia, in exchange for legal support for his court cases. How could he sully our cause? I mistrusted his commitment to ahavat Yisrael, love for the people of Israel. No one I knew spoke more incessantly of love for his fellow Jews, and no one I knew hated as many Jews as he did, reviling his opponents as traitors.

But I suppressed my doubts because he embodied the spirit of “never again,” because he’d figured out how to draw media attention for the neglected cause of Soviet Jewry, because he was our Black Panther, because he was funny and charming and knew how to flatter young people with attention, because he was “the Reb,” the rabbi, embodiment of the Jewish spirit of our time and place.

Like most of his American followers, I broke with him when he moved to Israel in the early ‘70s and became the leader of Israel’s farthest right, exchanging a campaign to free Soviet Jews for a campaign to expel Palestinians. That was not what I’d signed up for; I left Kahane and never spoke with him again.

In those years I would distinguish between the “good Kahane” of the JDL and and the “bad Kahane” of Kach. But the roots of Kahanism were there all along, in his moral expediency and love of violence.

As I watched Kahanism take root in Israel, I felt one small comfort: At least this abomination was being confined to the fringes. When Kahane spoke from the Knesset podium, after being elected a member of parliament in 1984, Prime Minister Yitzhak Shamir led a walkout of the Likud faction. Baruch Goldstein was repudiated by almost the entire political and religious establishment; the settlers’ publication, Nekudah, called his atrocity a desecration of their cause.

Kahane remained isolated within the settlement movement and, of course, within the wider religious Zionist community. Respectable, middle-class Orthodox Jews didn’t like him. The distaste was visceral, aesthetic: The rabbi with the American-accented Hebrew who acted as if Israelis were Brooklyn Jews in need of his vigilante protection, whose Torah commentaries were embarrassingly simplistic and who confused the optimistic messianism of Rav Kook for an alien apocalypticism, who called Arabs “dogs” and snarled when he spoke, whose followers were most emphatically not the boys you would want your daughter to marry: Kahane was not, as they say in the religious world, “one of us.”

But now, thanks to the delegates of the Jewish Home party who voted to join with Otzma Yehudit and the rabbis who gave their hechsher, their seal of kosher approval, Kahane has posthumously become one of them. The party of the faithful has committed an historic act of Hillul Hashem. The good citizens of the Jewish Home have married off their daughters to thugs.

As for Netanyahu – the shadchan, the matchmaker – he has written himself into the annals of our ancient kings whose moral corruption undermined the spiritual immune system of the nation. Netanyahu has committed the secular equivalent of Hillul Hashem: He has desecrated the name of Israel. We have at least this much to be grateful for to Netanyahu and to the leaders of the Jewish Home party: They have clarified the defining issue of this election, a referendum over whether the next government of Israel will be a government of Hillul Hashem.